There are memes within the economic news cycle: The "Gasoline Stimulus" meme, the "Consecutive Months of Job Creation" meme, the "Consecutive Weeks of Under 300,000 First-time " Unemployment Claims meme, and the "Retail Ice Age" meme come to mind. This column has spent a considerable amount of time examining these memes. The gasoline stimulus was consumed by higher taxes.  The Jobs Streak is not what it appears to have been.  It did not start when they think it did. It would not have "started" had the people who keep the data had not manipulated the seasonal factors during January 2011, it would have ended during January 2015 if the people keeping the data did not make revisions back to the beginning of the Obama administration,it did end last May after the release of the June Jobs Report until a phantom revision was made to the 2016 data after the 2016 election. The First-time Unemployment Claims Streak? Please. This column wrote four articles on the FACTs (False Assertions Considered to be True) during May 2016. It ended AGAIN during November of 2016. The Retail Ice Age is another Urban Legend.The most recent MARTS Retail Report showed that we are on track for the best retail sales Year EVER. The thing is that "all" legends are based on some original grain of truth.

The June Jobs report was remarkable. This column analyzes the monthly data in numerous ways:

The Retail Workforce is taking it on the chin.The data that is collected for the MARTS monthly retail report has thirteen sectors - one of which is the leisure and hospitality sector. This sector of employment is not included in the "All Employees" retail sector data. Instead the Food and Beverage Places data is found in the Leisure and Hospitality Sector.  If we look at the remaining "All Workers Retail" data we can see that seven sectors of the retail job market have fewer workers than they had during 2007. Two sectors - Food and Beverage Places and General Merchandise - have added jobs and are at the top of the list of employees. The MARTS worker table, which includes Food and Drinking Places, show that they have added even more workers and are the largest employer in the MARTS world.

Retail workers are fading as Retail Sales are Improving. The retail industry has seen an uneven recovery just as has the jobs sectors. Anyone who has set foot in a store lately, especially a "big box" store, knows that salespeople are being replaced by cashiers and cashiers are being replaced by self-service scanning lines at the checkout. If we include the Food and Drinking Places workers into the mix we have almost the same number of people working this year as we did last June. This may mean that some of those "Retail Sales" workers are now becoming "Leisure and Hospitality Workers."

Other trends have been noticed in the recent jobs report. There has been a shedding of jobs in the Health and Education Sector. The question is "Is this seasonal activity or a shift in the economy?" That is going to take more research. The sector data has also had an impact on the male workers in this economy. Instead of a "War on Women" there has been a "War on Men." More on that topic tomorrow.

There is a grain of truth to the Retail Ice Age Myth. We are seeing a shift in how business is being done. Fewer salespeople, more cashiers, more "kiosks." If you were in retail sales when the recession started you may not be in retail sales now. We have seen an increase in sales at "non-store" retailers. We have seen an increase in the Trade, Transportation, and Utility sector. The non-store retail numbers are growing faster than other parts of the retail segment, as is evidenced by the MARTS graph. The largest sector is the Vehicle Sales and Auto Parts Sector. The average age of automobiles on the road has been increasing for some time now. The spike in this retail segment could be due to increases in parts sales. Retail sales is the "ultimate" entry level position. It can also be a rewarding career.

This may be more of a Retail Winter than a Retail Ice Age. It appears that the jobs market is thawing and that the Jobs Iceberg is melting. We had dug a hole with regard to the full-time jobs lost during the create recession - the bottom of the iceberg. The top of the Iceberg was a smaller mass of part-time jobs.  The more full-time employees we have the more money, hopefully, people will have to spend. If they can work one full-time job that pays better than two part-time jobs they will have more money and more time to spend that money. We may see a drop in wages as people get jobs that are full-time with benefits versus part-time and no benefits. We cannot look at these reports as stand alone entities. They are all connected: Jobs - Housing - Retail Sales - Inflation - Wages - Healthcare. 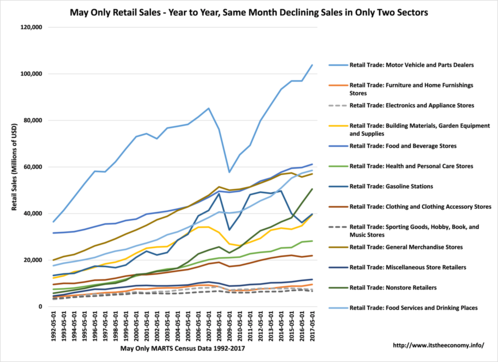 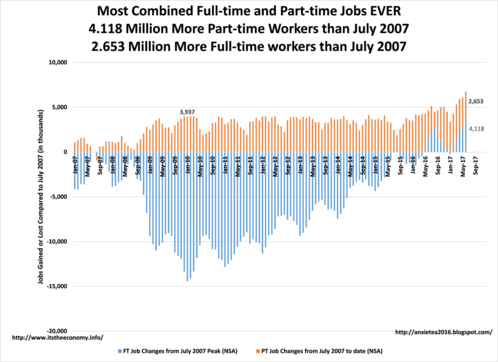 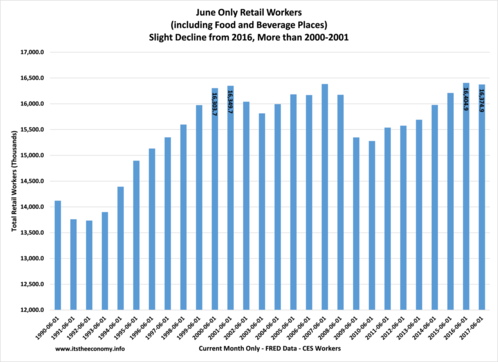 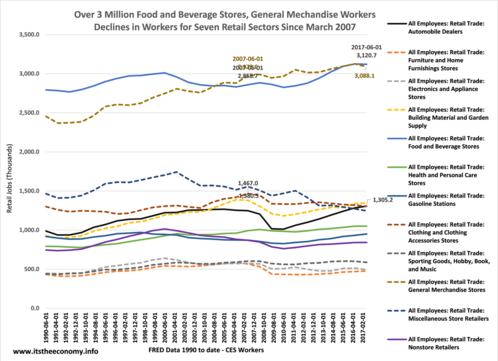