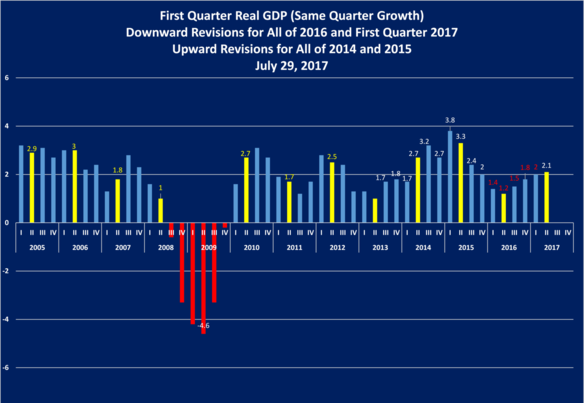 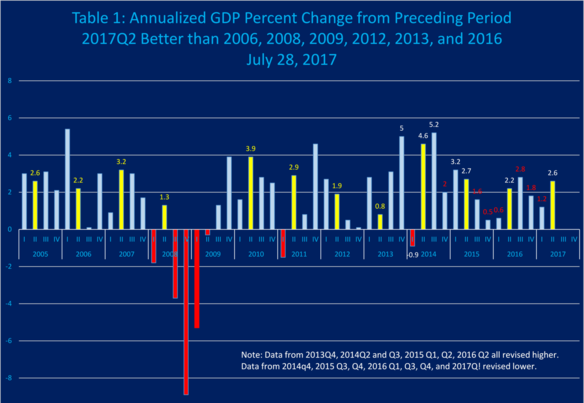 The Advance Second Quarter Gross Domestic Product (GDP) Report was released today. The headline number was that the economy is growing at a rate of 2.6% if this level of growth is maintained for the next 9 months. This is not the whole story. The second quarter report included revisions to all of the quarterly data from 2014, 2015, 2016, and first quarter 2017 "final" data.  Another number that gets some attention is the Real GDP, or annual growth rate for the past twelve months or four quarters. This value exceeded 2.0% for the first time since the fourth quarter of 2015. All of the Real GDP data was revised higher for 2014 and 2015. Elevating these levels means that the 2016 was effectively lowered by having a high basis from which to grow.

Second Quarter GDP grew at an annualized rate better than the second quarters of 2006, 2008, 2012, 2013, and 2016. The 2.6% rate is in part due to a lowering of the final Q1 value. Remember that the Q1 value had been revised higher each of the past two months. It is important to not that we have had negative annualized growth for the first quarter during four of the past ten years. The annualized growth rates of the second quarter GDP for  2011 and 2014 were impacted by negative growth rates during the first quarters of those same years.  The revisions to the data can be found in my Twitter Feed.

Second Quarter Real GDP Grew for the Fourth Straight Quarter. The Revisions to the annualized GDP data is roughly the same as that seen in the Real GDP. The real growth exceeded 2.0% for the first time since the fourth quarter of 2015. The Real GDP data revisions to the 2014 and 2015 data mean that three out of four quarters between the third quarter of 2014 and the second quarter of 2015 had growth over 3.0%. Even with these revisions, President Obama never had a year with 3.0% growth, as is evidenced by the Table 7 data.  The Real GDP rate for all of 2014 and all of 2015 were revised higher. All of the quarterly Real GDP Growth rate values were revised lower for 2016, as is evidenced by the Table 8 data.

The revisions to the three years of data could keep a student busy for a term paper.The most notable revisions were to the Gross Private Domestic Investment data to last quarter's data and the uptick in this quarter's data, as is found in the table 1 data. Personal Consumption Expenditures for Q1 were revised from 1.1% to 1.9% while Q2 was recorded at 2.8%. Gross Private Domestic Investment had increased at an annualized rate pf 3.7% for Q1 was revised down to -1.2%. This quarter that value increased by 2.0%. The final value for first quarter exports was a growth of 7.0% - that was revised higher to 7.3%. The export business increased another 4.0% during the second quarter. Imports were originally reported to have increased at an annualized rate of 4.0% during Q1. Imports increased by 4.3% after the revisions to the data and grew another 2.1% during the second quarter.

Growth adding onto growth is a good thing. We have had Real GDP growth during the past seven years. That growth has only occasionally exceed 2%, most noticeably during 2014 and 2015. Annual Real GDP growth after the recession of 2008-2009 is necessary for a recovery to be recognized. We are not quite experiencing the growth that we saw during 2005 and 2006. We can grow at a faster clip than 2.1% Real GDP or 2.6% Annualized GDP.  The growth rate of 4.0% annualized during the second quarter of 2014 was an artificial bounce off of a first quarter contraction that year.