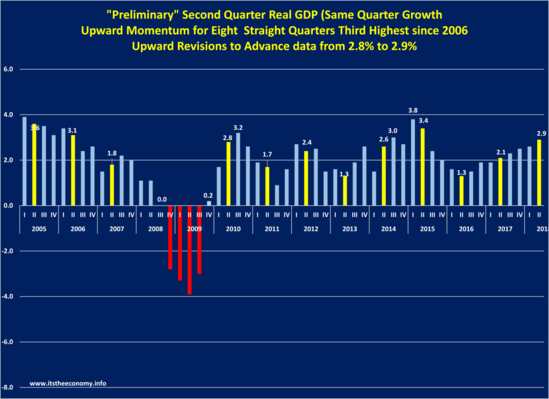 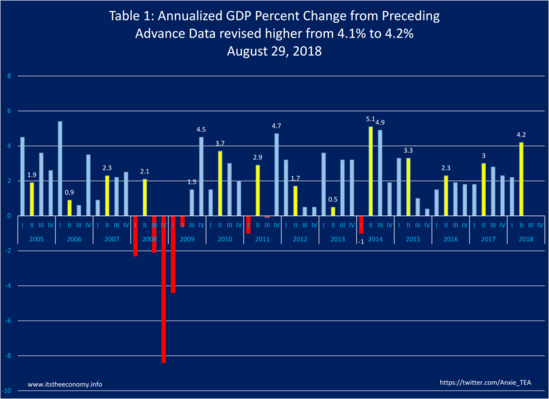 Last month we received the first look at the Gross Domestic Product for the Second Quarter of 2018.  The headline number, the quarter to quarter seasonally adjust GDP, came in at a solid 4.1%. What did not receive much attention, in part because the advance second quarter GDP report "always" makes revisions to the prior years, plural, data. The revisions were made back to 1929. The release of that report created a need for two articles "Giddy GDP Data" and "Grossly Revised Gross Domestic Product." Today we received the "preliminary" data for the second quarter. Some experts were expecting a downward revision to the advance value. It was not likely to happen because we have seen strong upward revisions to the monthly MARTS retail sales data which impacts the Personal Consumption Expenditure (PCE) data, we have seen upward revisions and upward growth in new construction data and Durable Goods data, which impacts the Gross Private Domestic Investment (GPDI Data,) and we have seen good data on imports and exports. What was recorded and what was reported in the preliminary GDP report?

The Quarter to Quarter data was revised up from% to 4.2%. This is the seasonally adjusted, hypothetical annual growth rate based upon the current quarter's data.

The rate of inflation is right around 2.9%. Retail sales have been up 5% for the current year compared to the prior year for four of the past six months. The contribution to the GDP of PCE was only 2.55% of the 4.20%. The talking heads say that PCE is normally 70% of GDP - that would place this value well over 3.0% The data is still very opaque.

The Same Quarter growth was revised higher from 2.8% to 2.9%. Once again the contribution of PCE was revised lower from the advance value.

The spread between the imports and exports should be boosting GDP. The "Table 2" contribution to GDP of Exports is 1.17%. This is being actively ignored elsewhere. Imports decreased our GDP by 0.01% during 2015Q2, added 0.29% during 2016Q2 , and added another 0.08% during 2017Q2. If we can improve our exports and reduce our dependency upon imports then we can grow our GDP even more than we are growing it.

The data for 2017Q3 GDP is just starting to come in to analysts. Retail sales are up. We may be at the start of a 5% current year growth rate streak that should last through the end of the year New Home Sales are up. Depending on how you look at the data they were up 7.2% for the current year, or up 8.4% for the past 12 months. Gross wages (The change in Current Employment Statistics Workers multiplied by the average weekly wages) was up 4.96% during July.   GDP measures growth. It could be heading well above 5% this quarter.