The Gross Domestic Product, or GDP, has three values: The Annualized (quarter to quarter) growth and the Same Quarter Growth rate, and the end of the year annual rate of growth. Former President Obama is the only President to never have a end of year growth rate of 3.0%. Last July when the annual revisions to the GDP were performed the data was revised back to 1929. This year the data was revised back to 2014. The GDP value for 2015 was 2.9%. There were some surprises in the Preliminary Second Quarter GDP report.

There were substantial revisions to the data from 2014 through 2019 first quarter. Last Year the GDP data was revised back to 1929. This column produced an article last July titled "Giddy GDP." Revisions are all part of "the game." There are often advanced values, preliminary values, and final values. Those "final values" are often revised on an annual basis.

Where was the growth? Last quarter all sectors added to the annualized GDP. That did not happen this quarter  Originally, Personal Consumption expenditures (PCE) increased 4.3%. with Durable goods spiking 12.9%. Gross Private Domestic Investments (GPDI)  fell by 5.5%, with structures falling 10.6% and Net Exports fell 5.2%. Goods fell 5.0% and services fell 5.6% for exports. Government Consumption expenditures rose by 5.0%

The Gross Private Domestic Investment number is important. The talking heads were lamenting the -6.1% GDPI number quarter to quarter. We saw a -1.8% reading during 2018Q2 and a -1.7% Q2Q reading during 2016Q2. This should not have been a surprise. The 4.0% growth from 2018Q2 is more important. It shows consistency in investments.

The data was decidedly mixed.The 2.0% growth could bolster Q3 growth by jumping less this quarter than it could have jumped this quarter. Still no 3.0% annual growth rate for former President Obama.  Always watch the revisions. 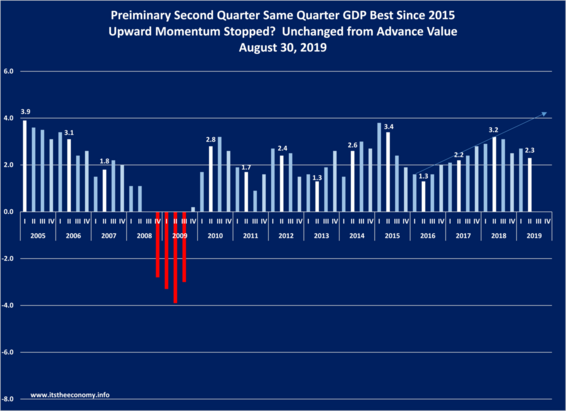 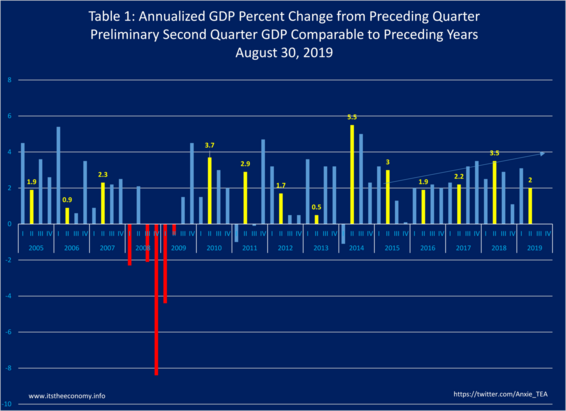