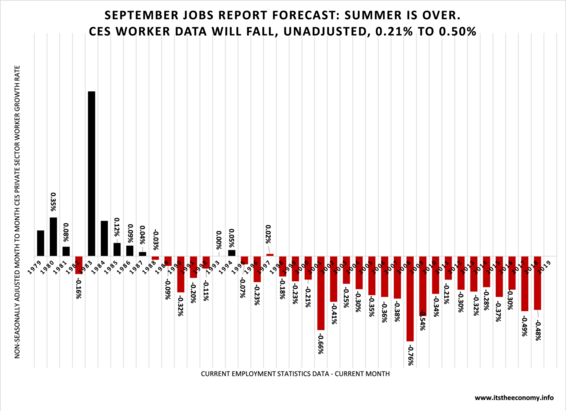 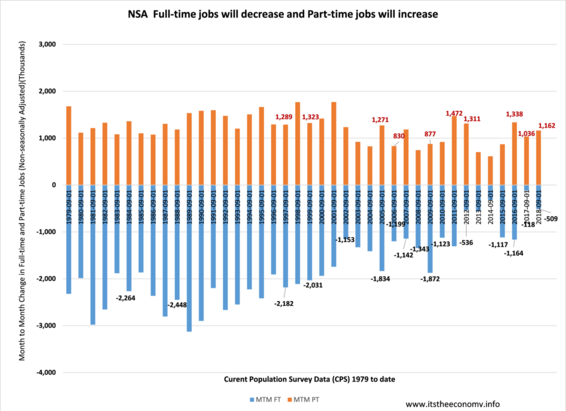 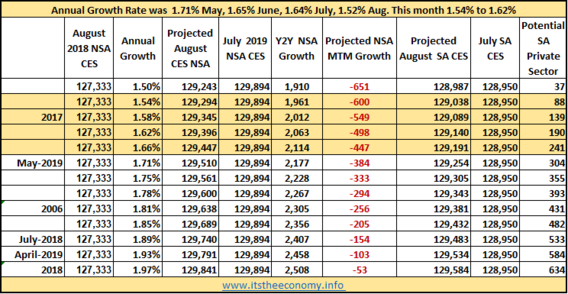 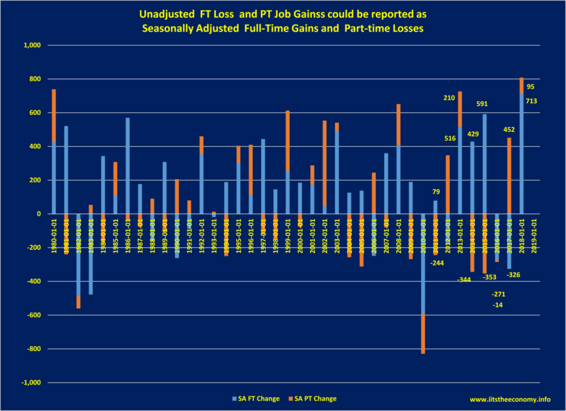 Unemployment Should Fall Seasonally Adjusted or Not.

The Non-seasonally adjusted CES worker level is expected to drop between 0.21% and 0.49% between August and September. This means that we could see roughly 273,000 to 641,000 workers leave the workforce during this September. This does not mean that the 'Jobs Streak" is over. The seasonal factor used to convert the NSA CES recorded data to the SA CES reported data has been drifting higher for the month of September since 2008. A higher seasonal factor (SF) will boost the SA CES data that is reported. (The SF changes by sector, month, seasonal and year. All of the changes shape the monthly seasonal factor.) If we use the same seasonal factor that was used during September 2017 then the range of growth could, in theory, range from 47,000 to 414,000 workers. It is more likely that we will see growth between 156,000 and 246,000 seasonally adjusted workers or roughly 201,000 workers.

The annual growth rate was 1.93% this past April and just 1.52% during August. The annual growth rate is projecting growth as low as 37,000 private sector workers. The more realistic level is between 88,000 and 241,000 workers. This is a large range, once again. The more realistic range is 139,000 to 241,000. The overlap is solidly in the 150,000 to 240,000 range, or roughly 195,000. The month to month changes are projecting a slightly high level of seasonally adjusted growth. If the month to month non-seasonally adjusted "growth" is not as weak at it could be, the same month growth rate could be higher than anticipated.

How is the expansion impacting men and women? The article series "The War on (Wo)Men" series has shown that women have added more total CPS job than men since the recession. Women have added more FT jobs than men. Men work more FT jobs than women, Women work more PT jobs than men. Men work more dual FT jobs than women. Women work more dual PT jobs than men. The increase in part-time jobs should mean that the number of women in the workforce will increase this month, and that the total number of women working full-time jobs and part-time jobs may continue, non-seasonally adjusted, through the end of the year. We saw this jobs expansion for women through the end of the year during 2018. Male dominated industries, including Manufacturing and Construction, are supposed to increase September to September, so the normal Fall/Winter decline in men in the workforce may be slightly muted.

Wages are expected to set a monthly record. The monthly wages and workers article details how each sector sees a different growth rate in hourly wages. Each sector works different levels of hours per work week. When hour wages and hours worker=d both increase from their prior year level we see total wages rise.

This week we receive the September ADP report and the September Employment Situation Report. Next week we will receive the August Job Openings and Labor Turnover Survey (JOLTS) data. People confuse the Job Openings data, which is closer to the CES data than the CPS data. The U-3 unemployment data is CPS data. The U-3 data is different from the Continuing Unemployment Claims data. One would think that if continuing claims fell month to month, they did, that U-3 unemployment should also fall. This is not always the case. One would think if unemployment falls then jobs would increase. That is not always the case. The CPS and CES data have been out of sync virtually every month this year.  The ADP data rarely coincides with the SA CES data because the ADP data is Private Sector Payroll and the NFP headline value includes government workers. The ADP Seasonally adjusted data is looking up. Compare these data sets at your own peril.

The net-net is that Unemployment "will" fall. Part-time jobs "will"rise. Full-time jobs will record a drop. Workers will record a drop. The CPS jobs data should record a jump. The seasonally adjusted Unemployment data should drop. The CES worker data should rise by 200,000 to 240,000 for total private sector and government workers should boost that number. Watch the revisions. If the SA CES data is revised up by 20,000 from last month's level then that will borrow 20,,000 from the September level. A modest 210,000 number could be reported at 190,000. The current year data is very important. The combination and permutations mean that we could see a number between 192,000 and 298,000 if we grow at the same rate we did during 2016 or 2017 and if the same seasonal factors are used. 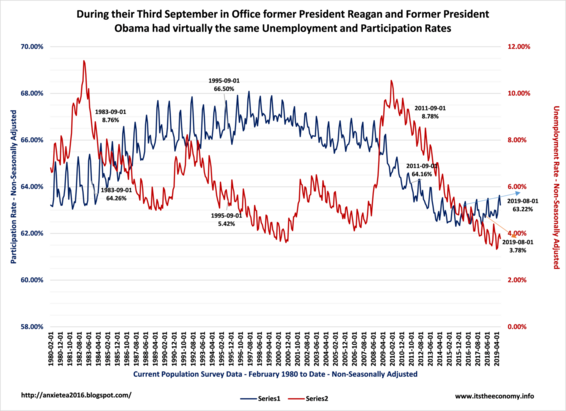 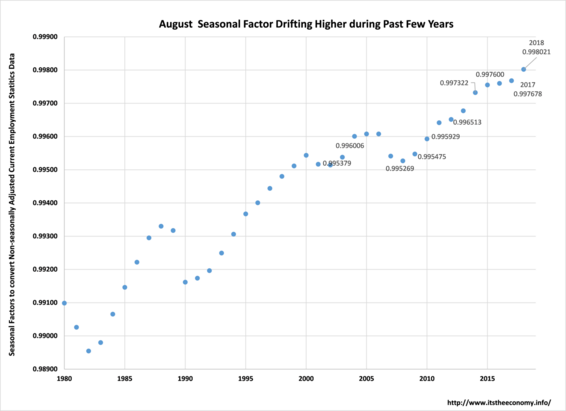 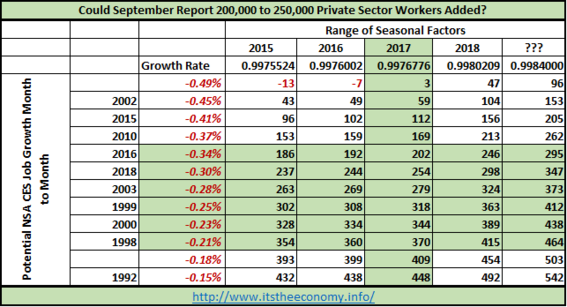 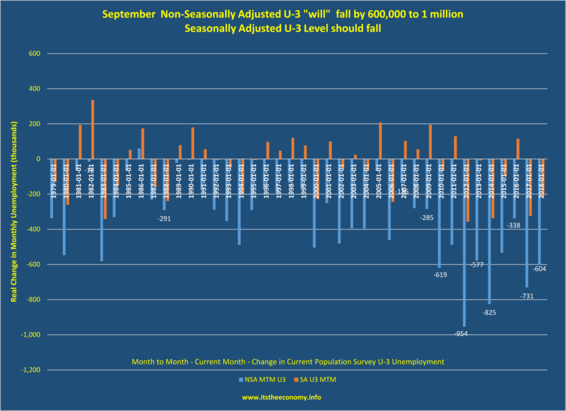 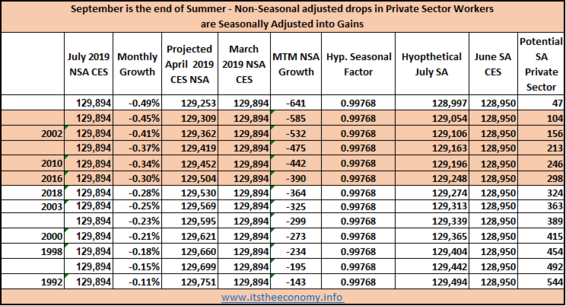 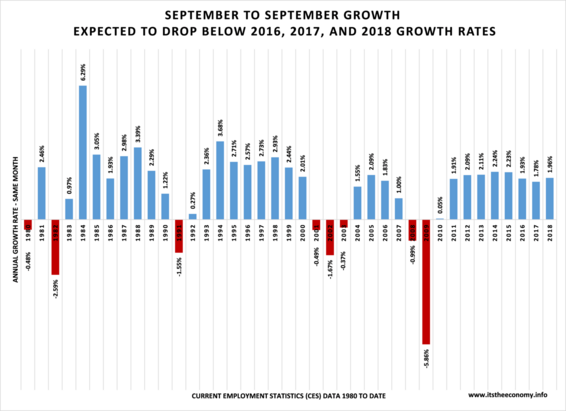