Surprising Data within the Data Sets

This column published an article a number of years ago when the "Jobs Iceberg" was discovered. A question was asked at that time: "How many jobs have been lost since the peak of the Jobs Market during July 2007?" When the graph was created it displayed that at the lowest point of the Jobs Recession we had lost 14.452 million jobs and added nearly 5 million part-time jobs.  We spent from January 2010 through the Summer of 2016  recovering those lost full-time, and adding to them, jobs before those full-time jobs were lost again. When President Obama left office during January of 2017 there were fewer full-time jobs than we had during July 2007, nine and a half years earlier. This technique was used to address changes in employment for men and women, whereby the Male  Jobs Iceberg and the Female Jobs Mountain graphics were created. This was inspired by the "War on Women" dialogue of the 2012 election. Lately there have been proclamations made that we have historic low teen unemployment. What is forgotten is that we also have historically low teen participation. The newest proclamation is that we have historic "black" or "African American" unemployment rate  and historically low  "Hispanic"  unemployment rate. Do we?

So far this column has written numerous articles regarding the September Jobs Report, or Employment Situation Report.

How are African Americans, Hispanics, and Caucasian workers doing as of September?

African American Workers lost 1.664 Million jobs at the depth of the recession. If you look at their data you will find that it to the African American workforce until February of 2014 to recover their lost jobs. These workers have added nearly 3 million new jobs since that time. Net-Net the media will tell you that they have "added" 4.6 million jobs since January 2010.

Caucasian workers lost 8.1 million jobs at the depth of the recession. This is a little bit of a surprise except when you consider that there were 125,000 jobs for Caucasians during September 2017, as compared to the 21.7 million jobs for Hispanics and the 17.5 million jobs for African Americans. If you are working more of the jobs then it can be expected that you would lose most of the jobs during a recession. Caucasians did not recover all of their lost jobs until the Summer of 2017. Even so, they still lost jobs during December 2017, and January 2018, meaning that there were less Caucasians working during January 0f 2018 than July 2007. Net-Net: Caucasians have "added" 9 million jobs since January of 2010.

What is full participation? Former President Clinton exceeded 68% at one point during his time in Office. Was that number artificially high because the workforce population growth was not as great early during his Presidency than was reported at the end of his Presidency? Is President Trump's participation rate artificially low because the population growth rate is the fastest it has been for the five Presidents, on an annual growth rate? the best way to compare unemployment rates is to factor in the participation rates during a specific month.

What is the real unemployment rate? If we hold the participation rate at the level we had during September of 2007, and we count those people who are neither as employed nor unemployed as "effectively unemployed," then the unemployment rates for the three categories of workers are all much higher than what is being reported. There are more missing participants than unemployed workers for each category of worker. The effective unemployment rate is lowest for African American workers and highest for Caucasian workers.

What About Full-time Jobs versus Part-time Jobs? This column first addressed this topic during April of 2017 with the article "Unequal Opportunity Recovery." The full-time and part-time jobs status by "race," we are all the same human race, was not recorded until January of this year. 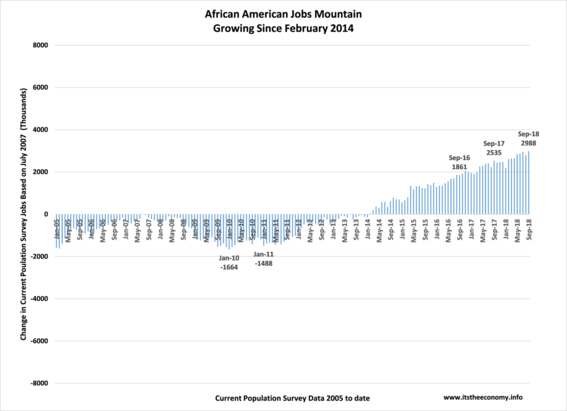 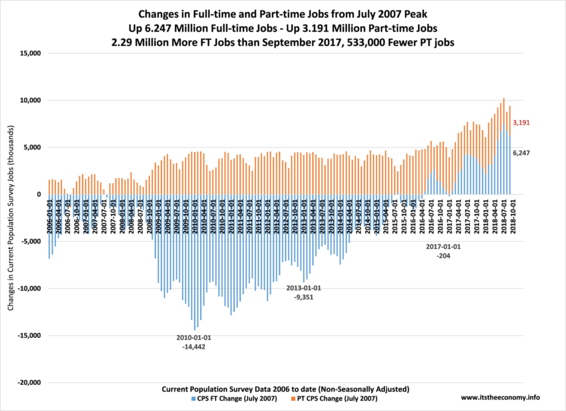 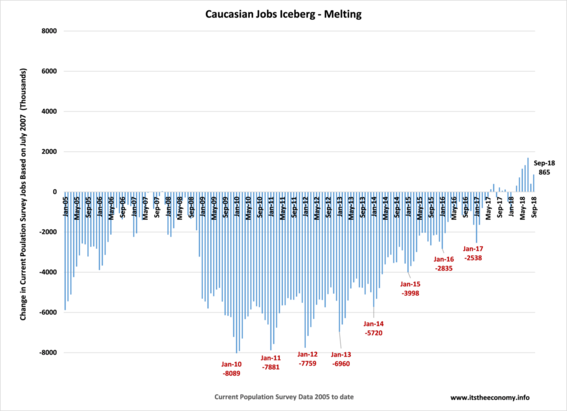 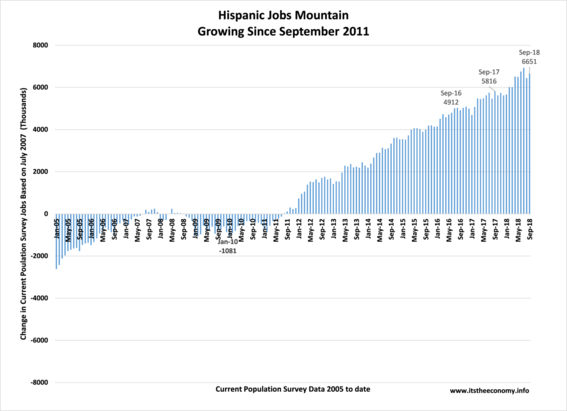