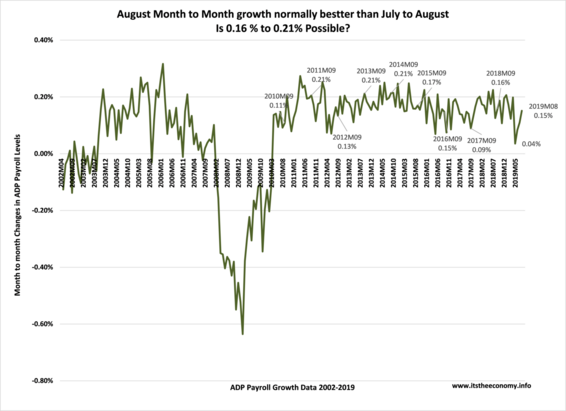 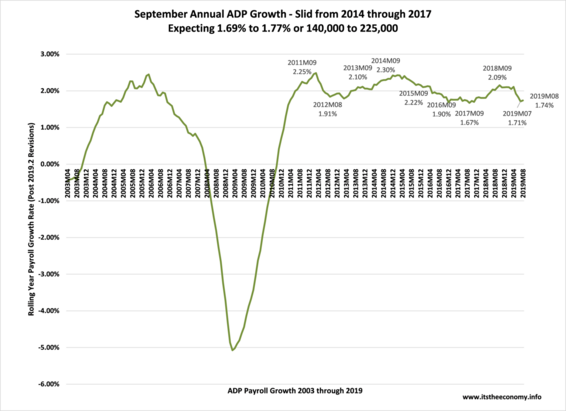 The prospects for a quicker pace of hiring is present.

The monthly jobs report is one of the most anticipated economic indicators released during any given month. The Jobs report, or Employment Situation Report, is created using two data sets, each with seasonally adjusted and non-seasonally adjusted components. The Current Employment Statistics (CES) data is the wages and workers data. This compares well with the ADP data. The ADP report is a private sector payroll report. The headline CES number is the non-farm payroll data. The NFP data includes both private sector workers and public sector workers. What is expected in the private sector this month, according to the ADP payroll data?

The Current Year data is showing growth from August to September comparable to 2013 and 2016.  We are trending slightly slower than 2016, after the February revisions to the data. February has been a critical month for the ADP data the past two years, 2018 and 2019. if the trajectory remains the same then we could see between 181,000 and 243,000 payroll positions added this September.  This would also mean that we could see a payroll level in the 210,000 to 212,000 range.

How do the three metrics work? When the month to month and same month, or rolling year, growth rate differ, the MTM data tends to be a better predictor, whether it is projecting a higher value than the RY data or a lower value than the RY data. This would place us around the 210,000 mark.  The current year data tends to be a "more valid" predictor the later it is used during the year. The trend is your friend.

The ADP data differs from the NFP data because the ADP data does not include public sector data. The NFP data includes public sector data.  The ADP data also differs from the CES data because it is a different data set with a significantly different sample size. The ADP data is revised after the CES data is revised. This revision has resulted in a significant change in the rolling year, same month, growth rate. Growth from 2017, 2018, and 2019 have been pushed back to the Obama era (See "February 2019 ADP Report: Remarkable" and ""February ADP Up, Significant Revisions" from 2018.) Last September we added 199,000 payroll positions.

This year we had our first 300,000 ADP report during January after the February revisions. Expect the unexpected. Expect a number around 210,000 in a "slowing" economy. Slowing still means growing.