The ADP Numbers had been improving from 2016 through 2017 prior to the February 2018 ADP Payroll Report. The payroll levels were growing at 2.27% during January 2018. That was quickly changed during the February Payroll Report. The growth rate for January was revised down to 1.80%. Revisions matter. The ADP payroll data closely reflects the Current Employment Statistic Private Sector data, as it includes no Government Jobs Data. The "headline" data that will be reported Friday is the non-farm payroll data, which includes government jobs data. Another data set released Friday is the Current Population Survey data measures full-time jobs, part-time jobs, and unemployed workers, as well as the workforce population.

What was reported in the September ADP Report?

We saw growth in all sectors September 2017 to September 2018. Even Information grew by 0.04% September to September. The largest growth, by percentage, was in Natural Resources, Construction, Professional Business Services, Financial Services, and Other Services.  The forecast article projected growth of 1.90% to 1.98%. The level of 1.96% was strong.

We saw August to September Growth in all sectors, except Information. The largest growth was seen in Natural Resources, followed by Construction, Professional Business Services, Education/Health Services, and Leisure/Hospitality. Information saw a minor drop of 0.04%, as expected.  The total month to month growth was 0.18%. The forecast article used a range of 0.17% to 0.20% to project the payroll gains month to month.

The data from July was revised down while the data from August was revised higher than last reported. The 6,000 drop in July was nearly offset by a 5,000 payroll gain during August. the upward revision to August "borrowed" 5,000 from the headline value of 230,000. The Current Year data is pulling away from the trend line of 2013 and heading toward the 2015 trend line.

The ADP report was strong. This bodes well for the Jobs Report that will be released this Friday. The ADP data mirrors the Current Employment Statistics Private Sector Worker number is a house of mirrors kind of way. The headline non-farm payroll (NFP) data includes government jobs. The NFP data with spike non-seasonally adjusted and should grow by more than 2,00% seasonally adjusted. 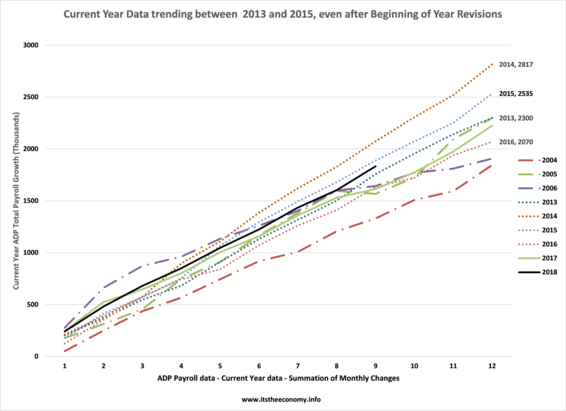 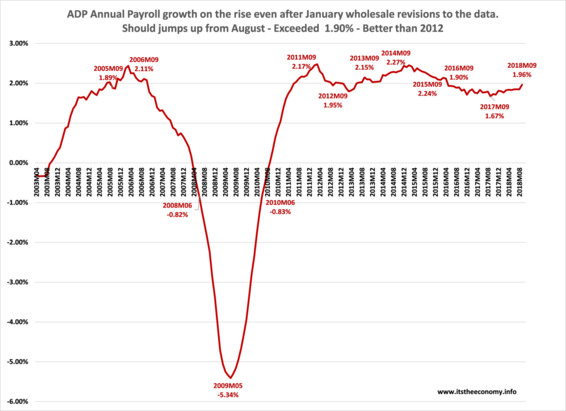 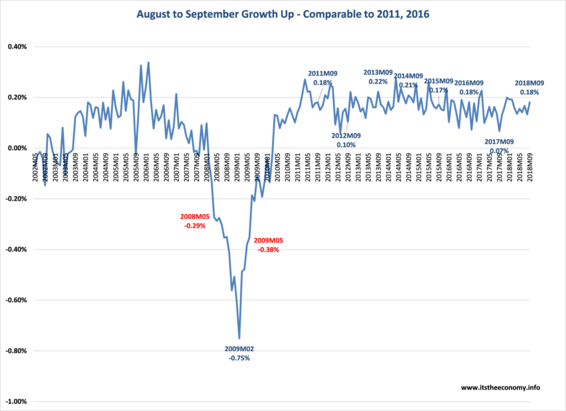