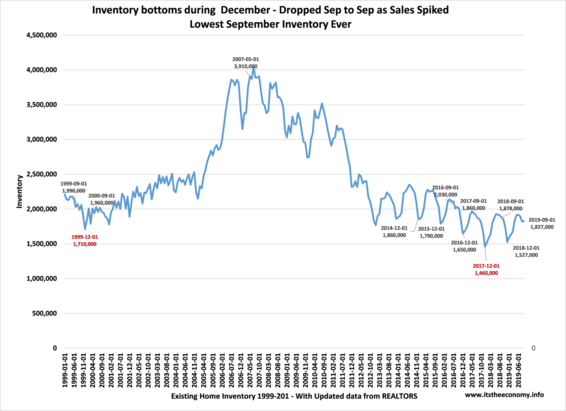 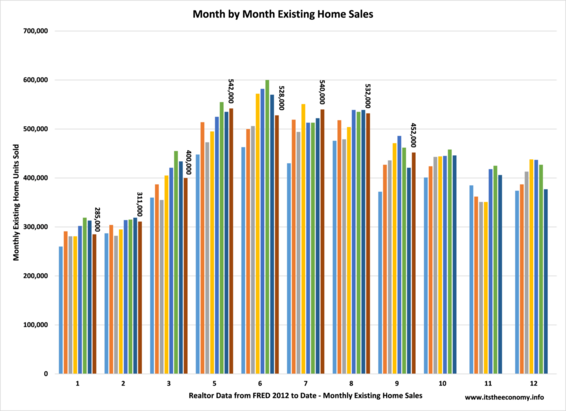 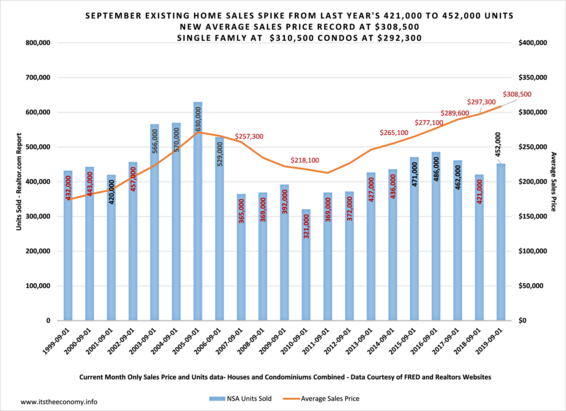 The existing home sales data was expected to decline month to month and possible improve September to September.  Existing home sales, units sold, tends to peak during June. . We saw July and August Existing Home Sales exceed June sales this year. Last September only 421,000 units were sold. The data is indicating that we may finally be seeing year over year gains in inventory, which should boost monthly sales for months to come. The media focuses on the month to month data while ignoring the same month data. This article looks at both measures.

Existing Home Sales Jumped 3.9% Annually compared to last September. This was not the headline that the REALTORS chose for their article. They wanted to focus on the month to month (MTM) decline. Sales Peak during June or July, normally June 30th or the Friday closest to June 30th, and slow during the remainder of the year. The 452,000 total units sold was more than were sold during the month of September for 2007 through 2014. It was projected that we could sell up to 429,000 units based on normal month to month sales differences. The annual data posted the minimum at 437,000. Normally the MTM data is a larger influence on the data than the same month data. This was a pleasant surprise to the upside. The seasonally adjusted annual sales jumped from 5.180 million last September to 5.380 million this September, or 3.9%. The September only data jumped 7.36%.

The Month by Month Data indicates that we started slowly this year, and that units sold will slow some more. Sales are recorded all year. People tend to place their home on the market after the Super Bowl and want to move by Labor Day. Condominium sales are not impacted as much by the vagaries of the school year.

Inventory rose Month to Month and yet was the lowest ever for the Month of September. It was thought that if we saw an increase in units sold during September that we would see a drop in inventory this month. We managed to spike sales and grow inventory. We had never been below 1.9 million units of inventory during September from 1999 through 2016. Inventory is the name of the game. We cannot Sell, or Buy, what isn't available for sale.

All real estate is local. The price of a home is determined by what a buyer is willing to pay for a home, who does not have to buy, and what a seller is willing to accept, who does not have to sell. They want to have a transaction. They do not need a transaction. The mantra used to be "Location, Location, Location." The reality is that the real estate market is not a national event, per se, as much as it is a state, county, city, school district, neighborhood or condominium, and units or home event. Location, condition and price determine what the property will fetch.

Real estate is an economic multiplier. People who buy and sell homes need services. Those service providers need more workers.Home buyers often buy other items for their homes, boosting retail sales, boosting retail employment. Rolling unit sales are possibly turning a corner. One month is not a trend. This was a remarkable report.