This month we could record the first $500 Billion Retail September.

The Seasonally Adjusted September Retail could be reported over $525 Billion

There has been endless discussions regarding  a supposed "Retail Ice Age." We had our first $6 Trillion MARTS Retail Sales year last year.  We have had six consecutive $500 billion or more retail sales months recorded so far this year. We are in a Retail Renaissance. There is a new way of doing business. This month is one of the reasons why there is seasonally adjusted data. Non-seasonally adjusted declines in retail sales will be reported as month to month seasonally adjusted gains.

The non-seasonally adjusted data should grow by 4% from last year's September Sales Level. The same month data last month rose by 4.20% after improving by 4.53% compared to July of 2018. Last year we had 481 billion dollars in total sales. If we grow by 4% this month, compared to September 2018, then we will hit $500 billion for the seventh consecutive month.

September Non-seasonally adjusted retail sales tend to decline month to month while increasing September to September. You can see from the multi-year histogram that there is a seasonal drop from August to September followed by month over month growth through the end of the year. All sectors should see month to month declines recorded with the largest drops by percentage in Motor Vehicles and Parts (MVP,) Furniture and Furnishings (FHF,) Electronics and Appliances (EAS,) Health and Personal Care (HPC,) and Clothing and Clothing Accessories (CAC.) The largest September to September growth rates should be recorded in Non-Store Retail (NSR,) Food and Drinking Places (FDP,) Gas Station Sales (GASS,) Food and Beverage Stores (FBS,) and Clothing (CAC.) We could see decreases from last September's levels for Building Material and Garden Equipment (BMGE, Sporting Goods, Hobbies, Books, and Music (SGHBM,) and Electronics and Appliance (EAS) sales

Rolling year growth has been declining as current year growth has been climbing. The rolling year (RY) growth is the total volume of sales during the past 12 months. It is looking backward. The current year (CY) growth tells us where we have been and where we may be heading for the remainder of the year. The RY and CY growth rates are identical during December. The CY and RY were virtually identical at 3.15% last month. Recent revisions to the data mean that they are now virtually identical at 3.27%  It is possible that the same month data will exceed 4% this month. Last year the same month growth was only 2.27%. The higher rate of current year growth means that the economy is growing, not slowing.

The Seasonally Adjusted Rolling Year and Current Year growth chart looks similar to the non-seasonally adjusted chart. Same month growth has been increasing from 3.01% during May, to 3.33% during June, to 3.58% during July, and then 4.14% during August. If we bump up to 4.28% or higher then we could see this translated into good quarterly, seasonally adjusted, Gross Domestic Product (GDP) growth.  The seasonally adjusted rolling year growth and current year growth were 3.21% prior to the wholesale  revisions to the data. Post-revisions the RY growth was was 3.36% and the CY growth was 3.28%. We could see the CY data meet the RY data or exceed it this month.

We are in a Retail Renaissance. Sales are shifting to non-store retail (NSR) more and more every year. We are also seeing a fundamental shift to ordering on-line and picking up the orders at the stores. Expect another record September, over $500 billion non-seasonally adjusted and over $525 billion seasonally adjusted. Watch the revisions. 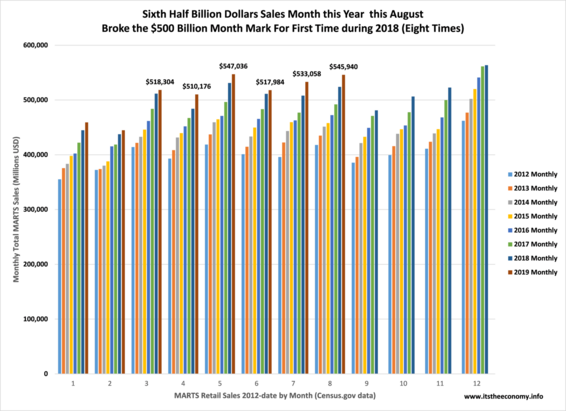 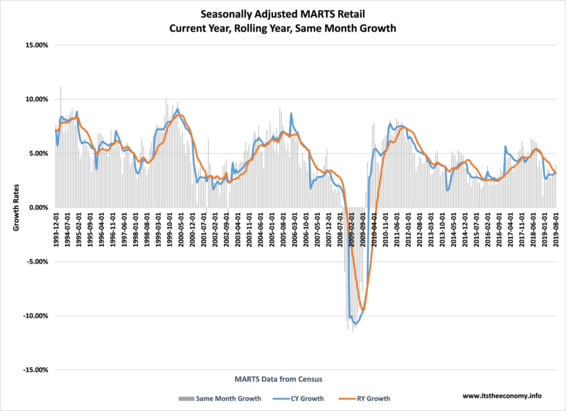 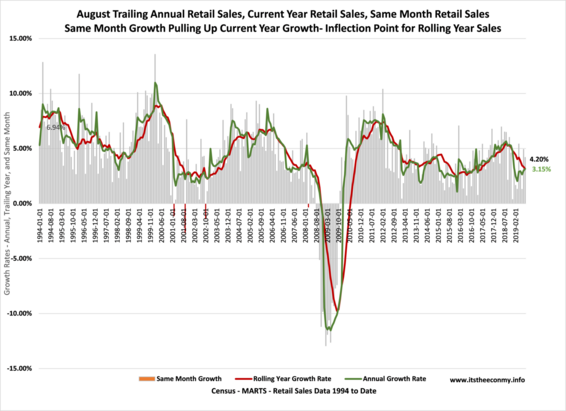