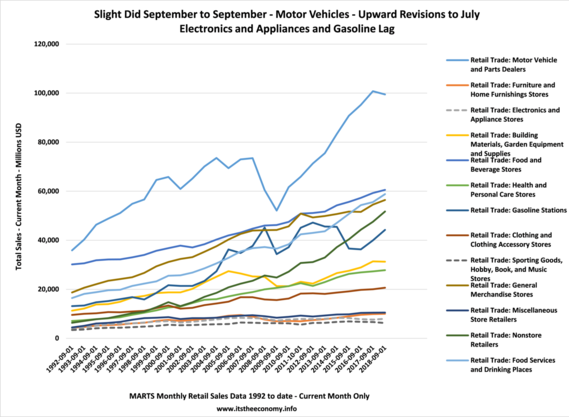 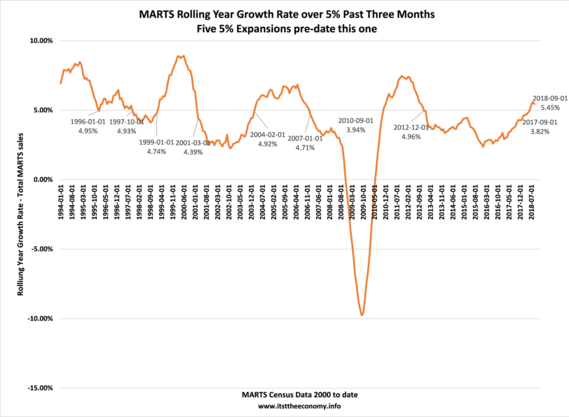 The monthly and Annual retail trade survey, or MARTS, report gives a snapshot of how the economy is doing. We are on track for our first $6 trillion dollar retail sales year. Sales are up by more than 5% from last year's record level of $5.75 trillion, which was up from the 2016 record level of $5.514 trillion dollars. Retail sales have been growing on an annual basis since 2010. The "Great Recession," as has been detailed in this column, was a Housing Recession that was reinforced by a jobs recession. The housing recession and jobs recession was reinforced by a retail recession.  The  retail recovery started first, followed by the jobs recovery. Not all sectors of the jobs market have as many workers as they did during 2007. Not all retail sectors have as much retail sales as they did during 2007.  Also, new home sales and existing  are nowhere near where they were during the pre-recession years. As new construction, new home sales, and existing home sales grow so do retail sales. The article "September Sales Surge Projected" that while the month to month, non-seasonally adjusted (NSA,) retail sales would decline, the September to September NSA retail sales would surge, and that the seasonally adjusted (SA) retail sales would continue to grow. The only sector expected to grow NSA was the gasoline station sector. All sectors were expected to grow SA. What was recorded, NSA, and what was reported, SA in the September Retail Report?

Non-Seasonally Adjusted The Total Retail Sales were up 5.4%. All sectors were up through September except Sporting Goods, Hobbies, Books and Music (SGHBM.) The total current year growth is up by $223 billion over last year, as of September. All sectors are at levels higher than they were during September 2007 except Electronic and Appliances( EAS) and Gasoline Stations (GASS.) We spent less on gasoline this September than we did during September 2008, and September 2011-2014, September only. Is this a "gasoline stimulus?" We had rampant news stories regarding the gasoline stimulus as gasoline prices dropped during 2012, 2013, and 2014. The Rolling year, or trailing year, growth dropped slightly to 5.45% from 5.60% growth. This is not the end of the world. Last year the September same month growth was 3.08%. This September that value was 3.12%. Last year the rolling year growth was only 3.82%. It is important to note the Building Goods, Material, and Garden Equipment (BMGE) sales, Motor Vehicle and Parts (MVP) and SGHBM all dropped September to September where it was projected that SGHBM should have been the only market slowing. EAS is growing. 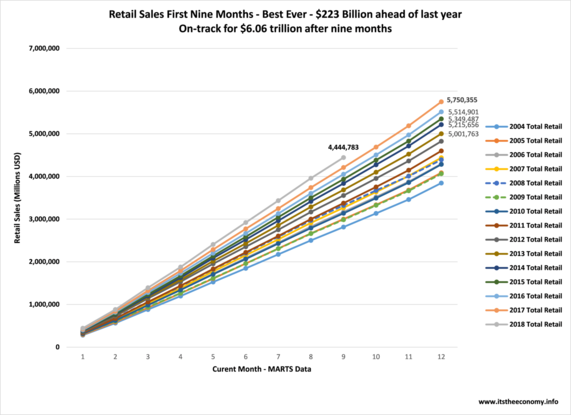