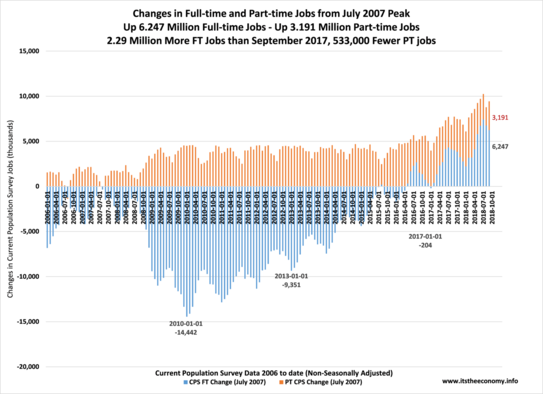 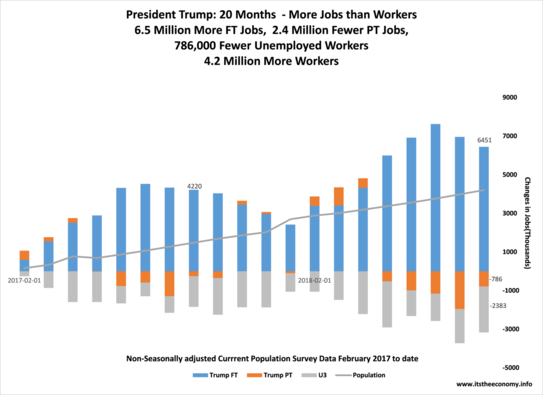 The data was good this month. Wages were up, non-seasonally adjusted. Workers and jobs were up, especially in the part-time jobs category. Unemployment is near the historic lows of October 1999 and October 2000. Remember that we have to factor in the number of full-time jobs and part-time jobs to calculate the unemployment rate. This was a strong report that got buried by the Supreme Court conformation process. We are not at full-employment because we are nowhere near "full-participation." We do not have more job openings than unemployed workers because the unemployment level does not include the "missing participants." We might as well compare the JOLTS job openings with the weekly continuing claims data as compare them to the CPS unemployed worker level. Three different data sets that measure three different "things."

The September Jobs Report, or employment situation report, was released amidst the drama of the Brett Kavanaugh confirmation process. Since that time the media has been obsessing over Kavanaugh and ignoring the jobs report. The seasonally adjusted (SA) Current Employment Statistics (CES) private sector number was a gain of 121,000. This normally would not be a great number. The August data was revised up by 69,000 workers which meant that 190,000 SA private sector workers were added to the economy.

This recovery has been uneven. Some Sectors are not back to pre-recession levels of workers. Women lost fewer jobs than men and recovered faster than men recovered. The unemployment level is comparable to that of October 2000 except the participation rate is significantly different. We have millions of missing participants. There has been discussion in the mainstream media (MSM) that the participation rate slide under former President Obama was due to retiring Baby Boomers (those born between 1945 and 1964.)  This column has written numerous articles on our "Red, Gray, and Blue" economy. What happened this September?