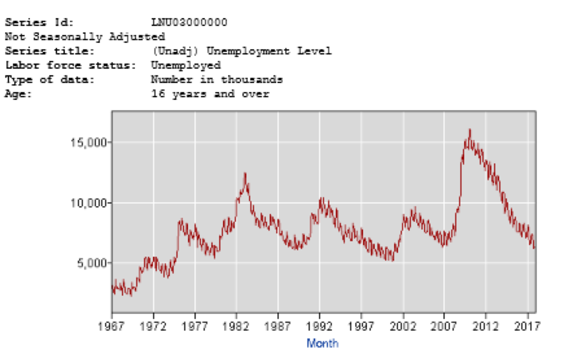 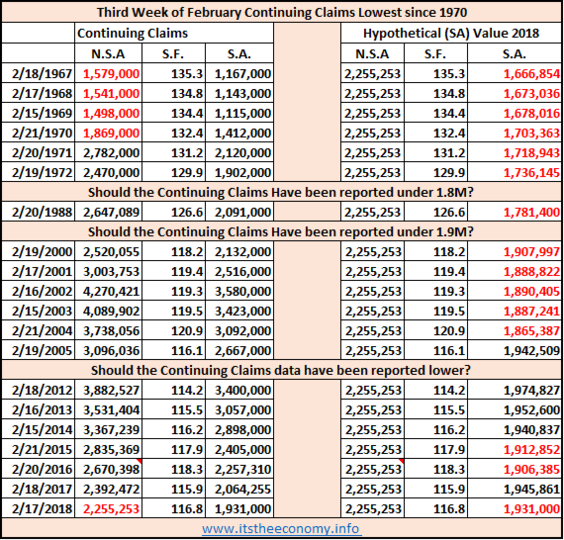 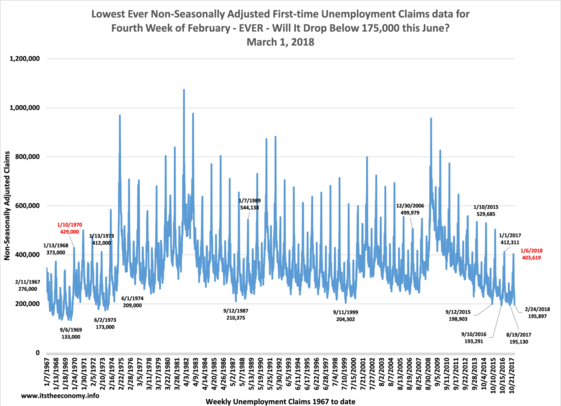 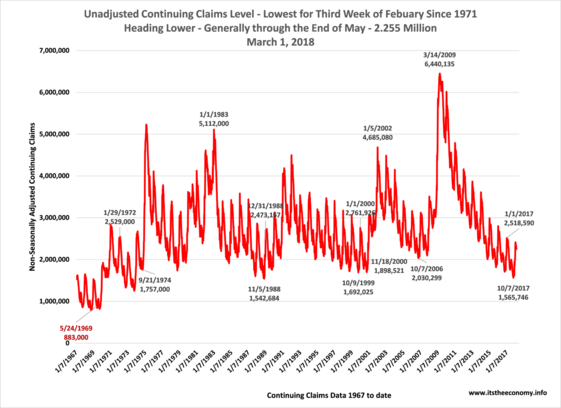 How Low will the Unemployment Claims Data have to fall before the Mainstream Media starts talking about it as much as they discuss "Palace Intrigue?"

The weekly unemployment claims data is released every Thursday that is not a holiday. The headline number is the seasonally adjusted (SA) first-time unemployment (FTU) claims data. A second component that is released with the report is the continuing claims (CC) data. The values that are reported are the SA FTU and SA CC data. The data that is recorded is the NSA FTU and NSA CC data. The seasonal factors used to convert the NSA data to the SA data change every week, month, season, and year. If you want t compare seasonally adjusted data you have to compare the seasonal factors and "normalize" the data. The is an economic urban legend that we are in the midst of the longest streak of SA FTU claims under 300,000 weekly claims. This was a streak manufactured by the Obama administration. The economic truth is that we have been seeing record low levels of non-seasonally adjusted first-time unemployment claims for the current week of the month for the past few weeks. This is important because there were fewer than 53 million covered insured during 1967 when the program began. This year we have over 141 million covered insured.  So what happened this week?

First-time Unemployment Claims recorded a drop to under 200,000. The NSA FTU value of 195,897 claims is remarkable. The lowest level that has been recorded since 1974 was recorded September 10, 2016 with 193,291 claims. This column, at that time, proposed that the exceptionally low level of claims was due to an elevated level of multiple job workers and normal seasonal lows. Seasonal peaks and lows are the reason behind having seasonally adjusted data. Right now we have virtually identical NSA FTU claims as we had during August of  of 2017 when we hit 195,130. Remember that we did not drop lower during September because of hurricanes Harvey and Irma. How low can this value fall? We saw a NSA FTU value of 173,000 recorded during the week of June 2, 1973. Could we bust below that value before the end of May? Could we set and all-time non-seasonally adjusted FTU value by September?

How low can unemployment fall? Right now the U-3 unemployment level is 7.189 million, NSA. The most recent low for January was 1997 with 7.069 million claims. That February the NSA U-3 claims level fell to 6.804 million. A drop of 300,000 claims is very doable this February. If we drop to 6.889 million that would set us at a 21 year low. We would have to go back to 1974 to find the low of 5.2 million unemployment claims.  The continuing claims level during February of 1974 was just over 2 million claims.  We has 2.4 Million NSA CC during February of 1997. Do not be surprised if we drop to a comparable level in the February Employment Situation Report.

Whereas the media used to make a big deal as the first-time claims were reporting values under 400,000 and 300,000 as "Bottom of the hour headline news." Right now the seasonally adjusted data is "taken as a given." The continuing claims data gives us an idea s to what could happen to the U-3 unemployment claims data for the February Jobs Report. The data for continuing claims was collected February 10 and February 17. The U-3 data was collected February 12th. The NSA CC value January 13 was 2.310 million.  We are roughly 260,000 claims lower if you average the the two weeks of data closest to the U-3 collection date. We could see an even larger drop because not all people who are unemployed collect benefits. Will the U-3 level drop below 6.8 million? Will the drop be reported?

This was remarkable news. There should be headlines everywhere that continuing claims are dropping and the the first-time claims data is at an all-time low for the current week of February. 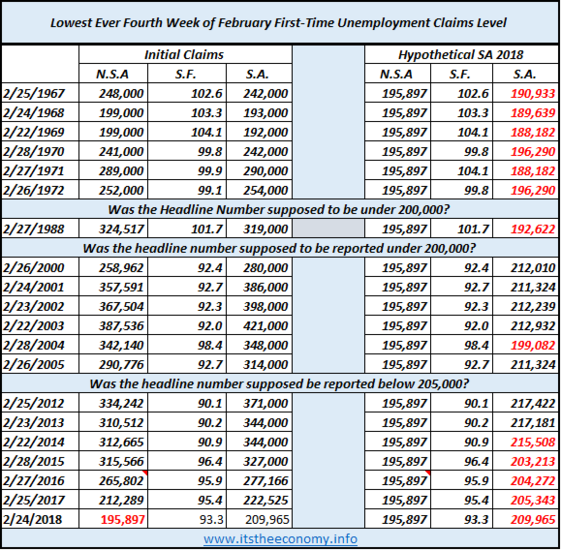