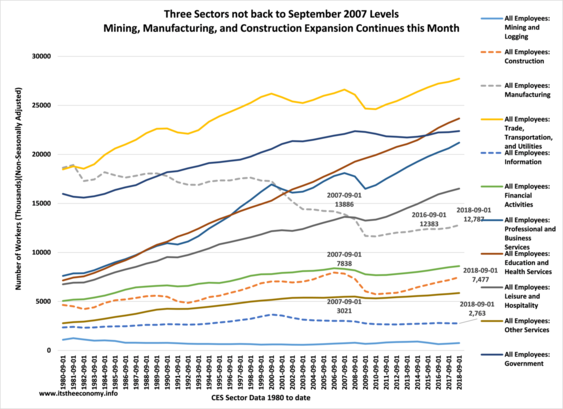 The September Employment Situation Report, or Jobs Report, was released to very little fanfare. The headline numbers were a bit disappointing. The article  "September Jobs Soar" detailed how we saw a spike in non-seasonally adjusted part-time jobs and a spike in government workers. Both were anticipated. What was unanticipated was the combined impact of weekly wages and workers had on total income. What was reported is not quite what was recorded. Here is what was found while digging into the data.

Three Sectors have  not recovered to pre-recession levels. We saw peak non-seasonally adjusted (NSA)  jobs during July 2007. This is measured by using the Current Population Survey (CPS) data. The headline data is the seasonally adjusted Current Employment Statistics (CES) data.  Only the CES data has wage data and worker data. We are on the verge of returning to pre-recession construction worker data.Manufacturing jobs are on the rise. The four largest gains, in real numbers, were Professional Business Services, Education/Health Services, Trade, transportation and Utility, and Construction.  The only sectors that have not returned to their pre-recession level: Manufacturing, Construction, and Information Technology.

All Sectors have grown since last September except Information Technology. The largest real, or total worker, growth has been in Professional Business Services (PBS,) Education/Health Services (EHS,) Trade, Transportation, and Utilities (TTU,) and Construction. The highest percentage growth has been recorded in Mining/Logging, Construction, and Professional Business Services (PBS.) The annual growth is jobs is important while comparing growth in wages.

Three of the four lowest weekly wage rates were in the sectors with the most workers. This will be important to understand when the Job Openings and Labor Turnover Survey (JOLTS) data is released for September next month. The JOLTS data lags the jobs data by one month. Could people be quitting because they have low wages? The Lowest Wages were in the Leisure and Hospitality (LAH) Sector, the "Other Services (OS) Sector, TTU, and EHS.

We are seeing Wage growth in our highest and lowest paid sectors. We are seeing worker growth in our highest and lowest paid sectors, except IT, and IT wages spiked this month. More money times more workers means more total annual wages. Total Annual wages are up 7%. This is an estimate because the Current Employment Statistic (CES) survey does not reach all employers and measure all employee earning. Multiplying the average weekly wage for a sector by the number of workers in the given sector, and multiplying that number by 52 gives us an annual wage rate. The growth between the total wages of a month in one year can be compared with the total wages of the same month from the prior year and calculate an approximate wage growth, unadjusted for inflation. Three of the four highest paid sectors saw wage growth of 4.87% or above.  More money means more money to save, spend, or invest. More spending can be on homes, furniture, electronics/appliances, home and garden, or even automobiles. More retail sales create a need for more workers. We are in a virtuous cycle.