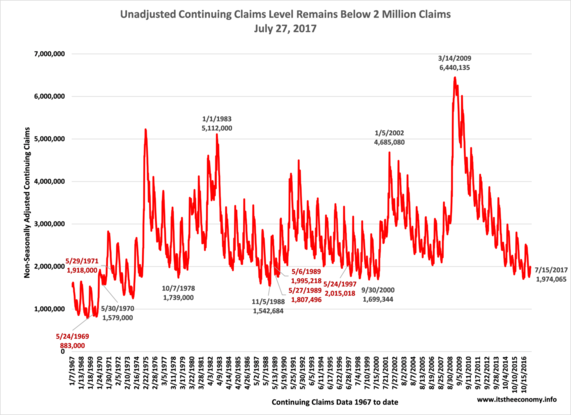 Uemployment Claims Limbo - How Low Can They Go?

The weekly unemployment claims report dropped like a feather today. This should not be happening. The data reported is the seasonally adjusted (SA) first-time unemployment (FTU) claims data and the seasonally adjusted Continuing Claims (CC) data . The data that this column examines is what is recorded, the non-seasonally adjusted (NSA) data.When seasonal data is compared with data from different seasons,  with different seasonal factors, FACTs (False Assertions Considered to be True) are created. The truth is that we have a truly historic low level of first time claims for this time of year.

Lowest Unadjusted First-time Claim Level for the Fourth Week of July - EVER. If you examine the accompanying graph you will see that we have rarely had fewer than 200,000 NSA FTU claims. We had not been under 200,000 until September of 2015 and September 2016. We approached the 200,000 level once during the 1980s, during 1987, and once during the 1990's, during 1999. The lowest the NSA FTU ever was during this week of July was during July 1969 when we had 221,000 NSA FTU claims. This week we have 219,776 claims. If we used the same seasonal factors that they used back then to covert the NSA FTU to the reported SA FTU then we would have heard that we had 190,000 SA FTU.This should be the headline today in the papers and on television.

Continuing Claims Remain Below 2 Million.We have to drop to 1.7 million, then 1.6 million, then 1.5 million to scare the all-time records for continuing claims. If we are going to do this it will happen during the first or second week of October.

These numbers are seriously low. Last week, and during prior weeks, this column has stressed that we have 139.99 million "covered insured" right now. We had 53 million covered insured during the week of January 2, 1973. We have comparable claims levels for both the NSA FTU and NSA CC claims levels now, with 87 million more potential beneficiaries., as compared to then. If we are 12,000 claimants lower low than during the same week of 2016 does this mean that a number in the range of 175,000 to 181,000 NSA FTU claims possible for the second week of September this year?

Let's start talking about this now.Seasonal full-time jobs and part-time jobs do not normally provide unemployment benefits. People who work multiple jobs do not receive benefits if they still maintain one job. These claim numbers could drop to "forever" lows this fall. 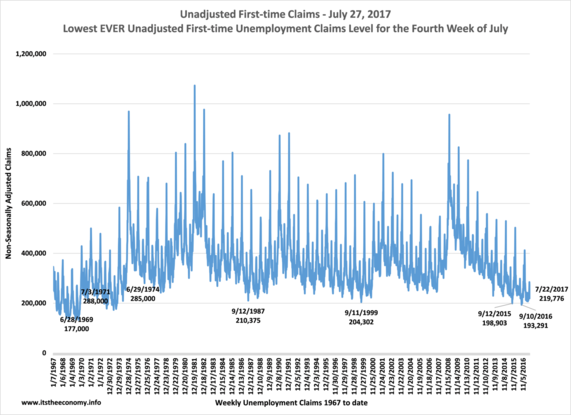 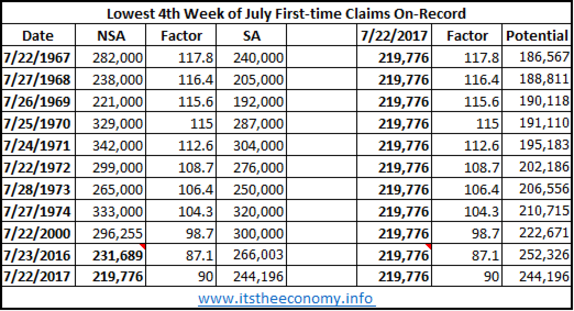