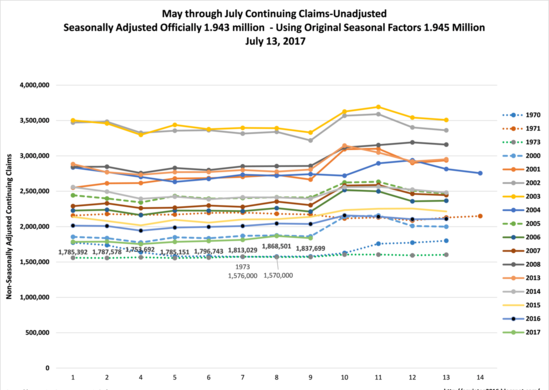 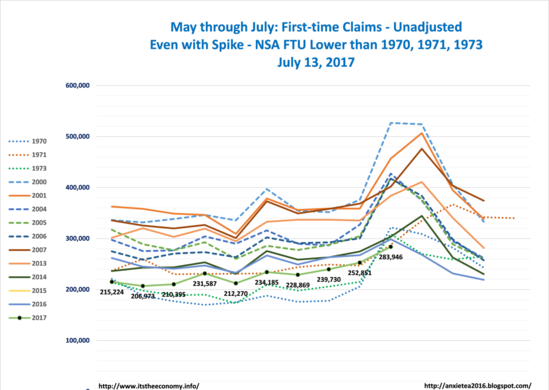 Thursdays used to be the day that people waited with anticipation for the weekly unemployment claims data. Were we below 500,000 first-time unemployment claims? Were we below 400,000? 300,000? These numbers were the seasonally adjusted  (SA) claims. The non-seasonally adjusted data is converted to SA data by using seasonal factors that change week to wee, month to month and year to year. A second set of numbers, the Continuing claims (CC) data also have SA and NSA data available. When SA data from different seasons are compared FACTs (False Assertions Considered to be True) are created. What you need to know is that the data is still being collected, adjusted, released, and ignored.You also need to know that we have not had NSA FTU claims levels this low for this week of July since 1971 when there were 80 million fewer workers eligible for unemployment benefits.

The Lowest NSA FTU Claims Level for the First Week of July Since 1970. Normally there is a spike in Claims during the first week or Two of July. This week we saw a gradual rise in claims. The SA FTU was reported at 240,000 claims - the problem is that they have revised the seasonal factors used to convert the data within the past week. All of the seasonal factors for the rest of the year have been amended. It is also important to note that last weeks NSA FTU value was revised up from 250,433 to 253,851 claims.

The weekly claims data is very low because of the influx of part-time jobs and seasonal full-time jobs during the past eight years. It appears that as the economy was contracting some full-time jobs were replaced by part-time jobs. It also appears that some full-time jobs were seasonal jobs. People were "forced" to work multiple jobs in order to earn wages comparable to what they were earning prior to the recession. When a person works two or more jobs that people is not unemployed if he or she loses one job - they are only lesser employed. The continuing claims data is different from the unemployment (U-3) number in the monthly jobs report. The U-3 unemployed may be surveyed and found to be looking for work and not employed. The people in the weekly unemployment reports were employed and now are unemployed and collecting benefits.

Expect to see continuing claims edge higher next week. Expect the NSA FTU claims to either remain at the current level or start to drop.Will we hit 200,000 NSA FTU claims this Fall? Most certainly Last year the NSA FTU claims level dropped below 200,000 claims during the second and fourth week of September. We are seeing solid hiring numbers. Employment normally peaks during July or August Each Year. Jobs will wane a little as employees head back to school or as seasonal jobs are no longer needed.