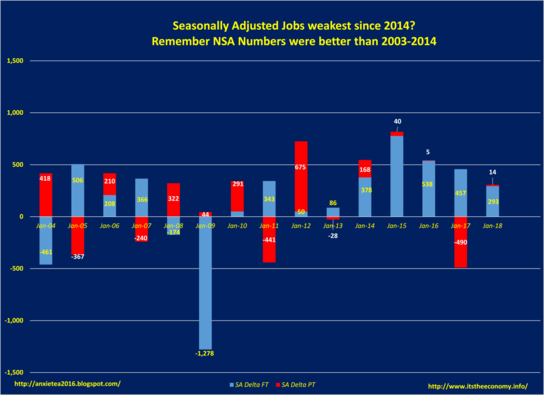 This was a solid solid jobs. The January Jobs report included massive revisions to the Current Employment Statistics data set, as was detailed in "Jan. Jobs Surprise." The thought going into the report was that there might be some revision to the November and December data. There was revision to data from the past two years that were substantial. There were minor revisions to all of the data from 1981 through 2017 for the non-seasonally adjusted (NSA) and seasonally adjusted (SA) data. If we used the data published last month, the December jobs report, and the data for January from this jobs report there would have been 447,000 seasonally adjusted private sector workers reported as having being added to the economy.

Unemployment popped during January - This is normal. This was the smallest pop in unemployment since 2013. The forecast article projected a sizable bump, based on a sizable bump in the continuing claims data for the week closest to the data collection week for the January Jobs Report. It was thought that the U-3 unemployment number could increase by 10-14%. It jumped by 14.51%. This was not much in the grand scheme of things. Even after this spike, the non-seasonally adjusted U-3 unemployment level was the lowest since 2002 and lower than 1980-1997, January only.

If we are growing why does the CES worker revisions indicate a declining worker market? The ADP jobs report indicated that there was a 2.27% annual growth rate for the private sector, seasonally adjusted. Yesterday, on the Twitter feed, this was referencedin a tweet where the seasonally adjusted ADP annual growth rate was compared to the seasonally adjusted CES worker growth and the non-seasonally adjusted worker growth. The data revisions to the NSA CES private sector worker data means that instead January 2017 growing at 1.68%, and December 2017 growing at 1.73%, that January 2017 grew at 1.77% and December grew at 1.82%. The upward revisions to December meant that the growth rate during January 2018 fell to 1.71% even though it was of of the best Januarys for for job change.  We saw NSA CES workers during 2016 contract at -2.05%. We saw NSA CES workers contract by 1.96% during January 2017. Without the revisions to the data the contraction would have been at -1.86%. This would have been the second best January going back five Presidents, second only to January 1984.

There are numerous ways to examine this data. We can look at the changes in full-time and part-time jobs. We can look at changes in the number of workers. We can look at the number of people who have to work multiple jobs. Which sectors are surging and which are still lagging behind where they were prior to the recession. How are men and women doing compared to each other? How are various age groups doing? How is President Trump doing compared to President's Reagan, Clinton, George W Bush, an Obama? All of these questions will be answered next week. The thing you need to know is that the data is fluid. Revisions make a big difference. Seasonal factors make a difference. 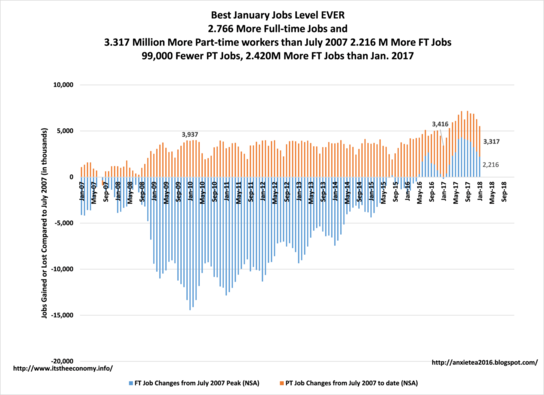 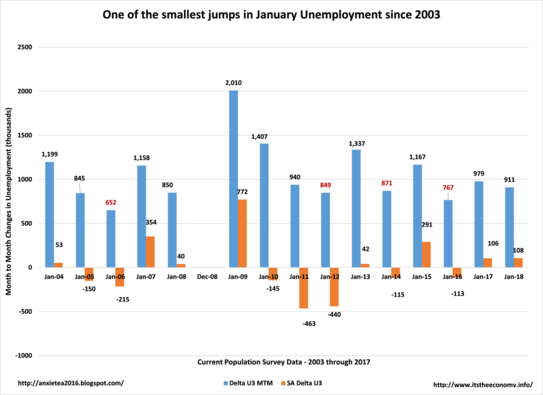 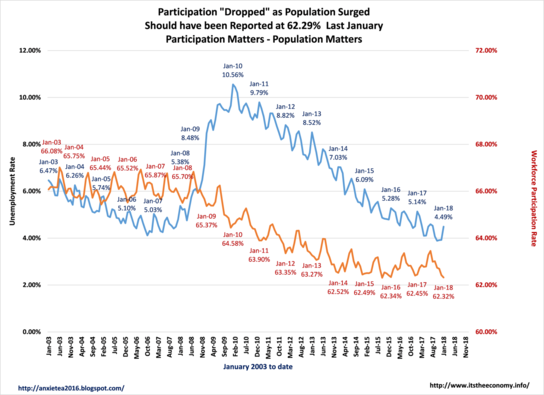 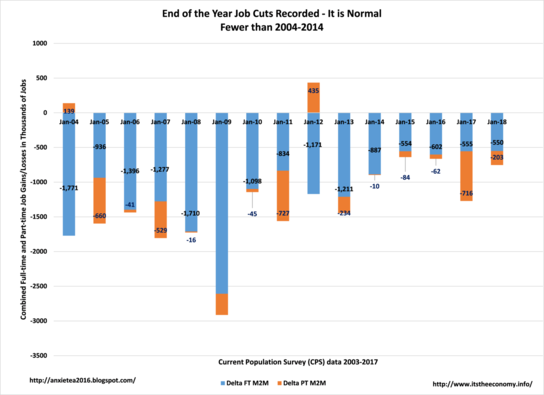