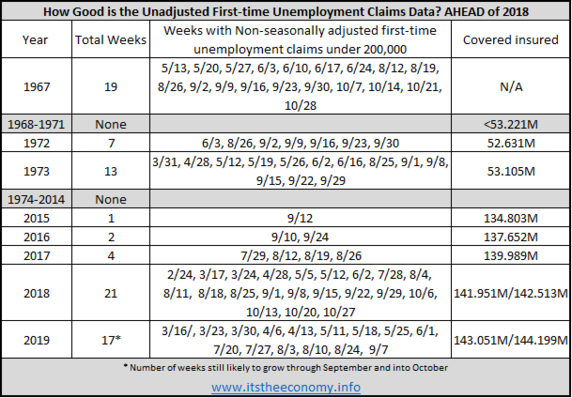 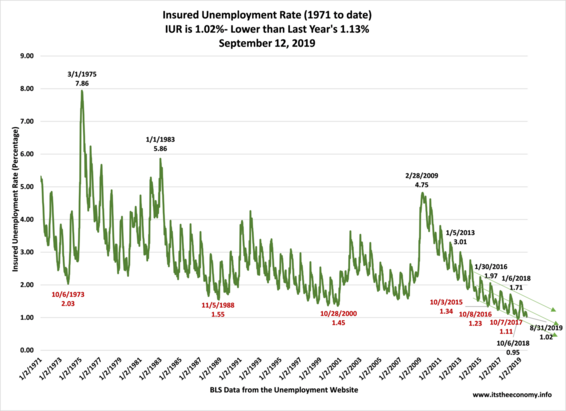 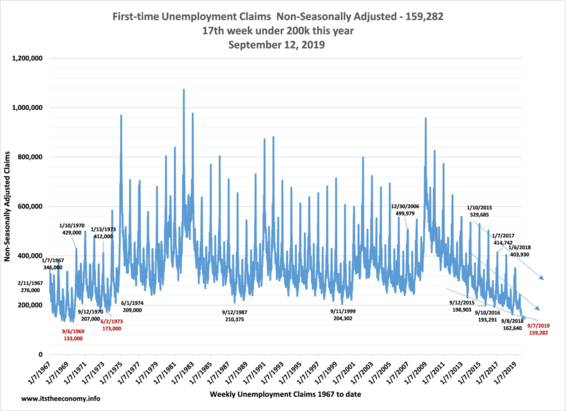 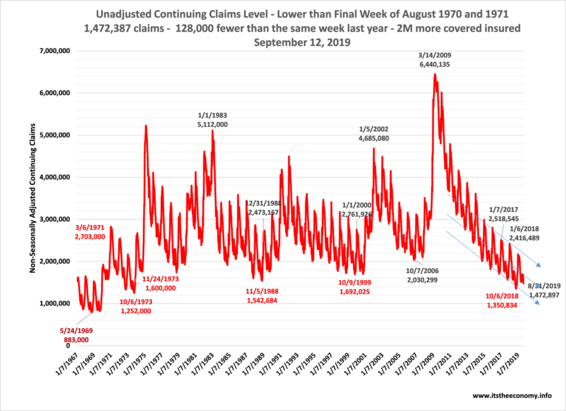 There is a First-time Unemployment Claims Streak, Sort of.

There is a Continuing Unemployment Claims Streak

Non-Seasonally Adjusted first-time claims fell to 159,282. Last year we had a low of 162,240 during the "second" week of September. The difference between September 7th this year and September 8th last year may be negligible. If you examine the same week data back to 1967 you will find that there are only two weeks where the first week of September were lower: September 7, 1968 and September 6, 1969,  We have 144 million "covered insured" this September. The covered insured during 1968 and 1968 are unavailable and believed to be lower than 50 million. This was the seventeenth week this year with the NSA FTU under 200,000 claims. There were only 13 weeks as of the first week of September 2018. There were only 13 weeks under 200,000 claims during the entire year of 1973.

The Seasonally Adjusted First-time claims data could have been reported at 193,000 claims. It was reported at 204,000. The seasonal factors change month to month and week to week, as well as year to year. If the data was adjusted for changes in the covered insured level then this number would be much lower than it was reported.

The Continuing Claims level dropped to 1,472,387 claims. This is the lowest level that it has been other than 2018 since 1973. This is important because the continuing claims data continues to fall through the first week of October. It could drop through the first week of November. This is 1.28,000 claims lower than the same week last year. Could we drop below 1.25M claims this year?

The Insured Unemployment Rate was just 1.02%. This number receives very little attention. This is the percentage of covered insured who receive unemployment benefits. Last year we had an NSA IUR of 0.95%. This year our IUR is well below the 1.13% that we had the final week of August. Could we see an IUR under 0.90%?

Today was a day filled with economic data with the release of the Unemployment Claims Data, the Consumer Price Index (CPI) data on inflation (and Deflation,) and the Monthly Treasury statement on Revenue and Outlays.  The CPI data showed some inflation and some deflation. The Treasury Report revealed that corporate revenue and individual revenue are elevated from last year's current year data. There will be more on these reports later.