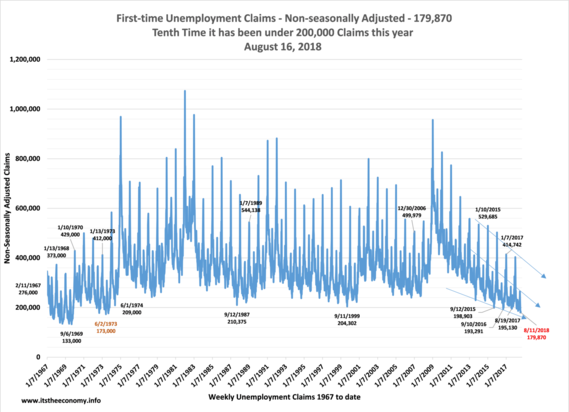 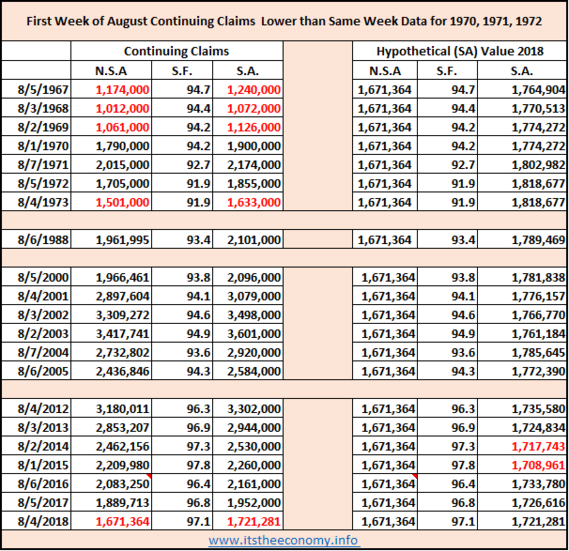 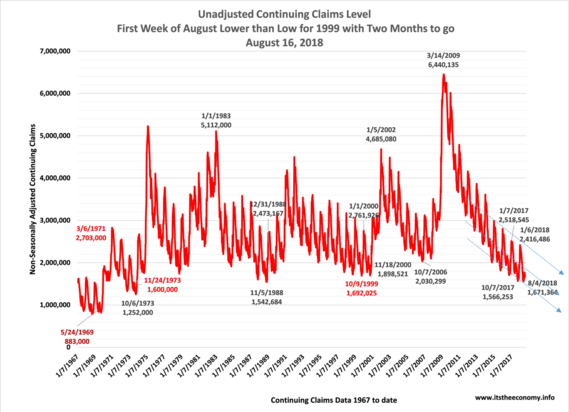 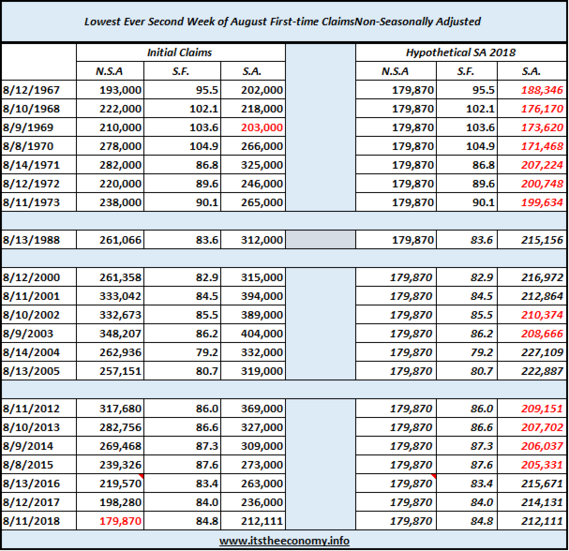 How low can the weekly unemployment claims data fall?

The weekly unemployment claims data is released every Thursday that is a non-holiday.  The headline number is the seasonally adjusted (SA) first-time unemployment claims (FTU) data. A second number is the SA continuing Claims (CC) data. The seasonal factors used to convert the non-seasonally adjusted (NSA) data to the SA data change by category, week, month, season, and year. The "Unemployment claims streak" touted by former President Obama is an Economic Urban Legend. The seasonal factors could have just as easily ended the streak multiple times during the streak as it did  keep it alive. The obsession with the SA FTU data has kept the press from reporting on the SA CC data and from recognizing that the NSA FTU value has already been under 200,000 claims nine times this year (2/24, 3/17, 3/24, 4/28, 5/5, 5/12, 6/2, and 7/28, and last week 8/4/2018.)

This was the lowest ever Non-Seasonally Adjusted First-time Claim Level for the Second Week of August. Yes, the seasonally adjusted data from 1967 and 1969 are lower than this year. If we used their seasonal factors then the headline data would be as low as 174 SA FTU. This is the 10th time that the NSA FTU value has been under 200,000 claims. Will we break below the lower prong of the FTU "pitchfork?"

The SA FTU claims level should have been reported under 200,000, under 190,000, under 180,000. The seasonal factors used to convert the NSA data to the SA data was manipulated to bring in the unemployment claims streak for former President Obama.  Right now the trend for the NSA FTU is to drop below 150,000 NSA FTU claims by the end of September, when we normally hit our annual low.  It appears that 160,000 is well within reach.  What the SA FTU will be depends upon which week we hit our low.

The Continuing Claims data continues to fall. The continuing claims data lags the first-time claims data by one week. The data for the first week of August is under 1.7 million. We are lower than we were during October of 1999.  We have two months of dropping claims to drop below the 1.566 million we saw last October and two months to drop below the 1.542 million level recorded during the first week of November 1988.