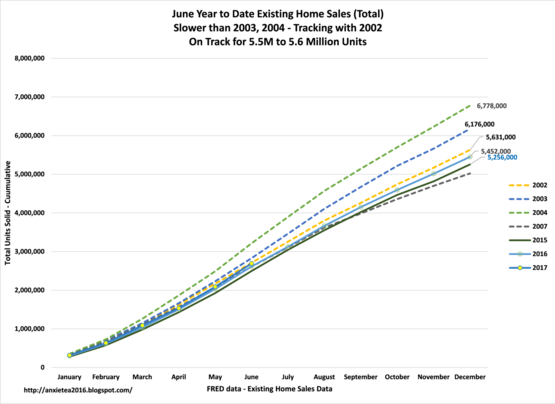 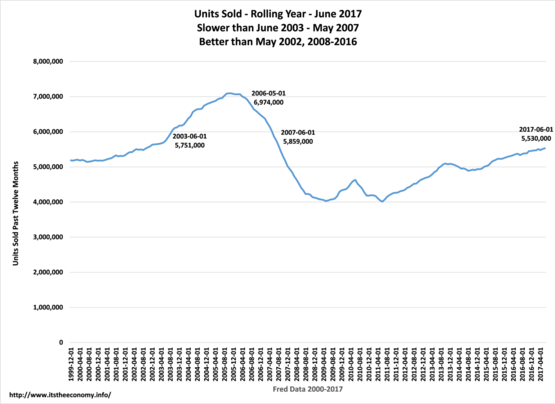 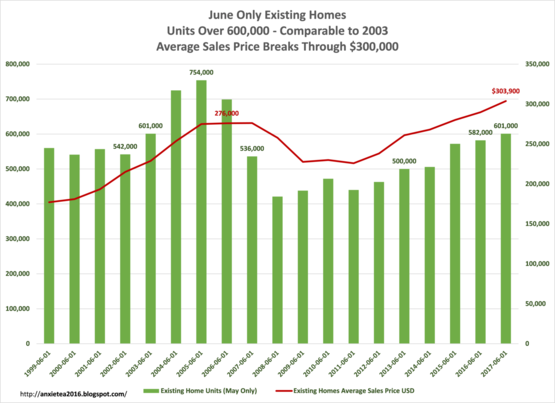 Record June Average Sales Price - Units Sold back to 2003 Level. This is the highest level of June home sales recorded since 2006. The monthly sales were higher than June 2007, 2008, all the way up through 2016. This is the highest average sales price for existing homes during the month of June "ever." The data only is available back to 1999.

The Rolling Year data recorded over 5.5 million units sold. The rolling year compiles the sales from the past 12 months. The pace of growth is steady. While the data still lags the data from June 2003 through June 2007, this is the strongest it has been since 2007.

The Current Year Data is growing at a rate similar to 2002. Once again, this growth is better than anything we have seen since  2007. The current year data is on track for roughly 5.6 million units. THe value for the current year projection is higher than the rolling year which means that we experiencing real growth.

Inventory remains below 2 million units. The only  things holding back this market is inventory and credit-worthiness. The worst of the recession was during 2010. People who go through personal bankruptcies or foreclosures have a stigma on their credit report for a period of seven years. If people have been holding off for values to return to pre-recession levels, now they are waiting to be approved to purchase a home.

The good news is that the growth in existing home sales is steady. It may take another three years to return to pre-recession volumes.  It is possible that these home sellers will buy new homes, loosening that market. We will know more on new home sales later this week. It used to be that the best data in two, three, five, seven years would have been headline news. Doesn't anybody else want to report good news?