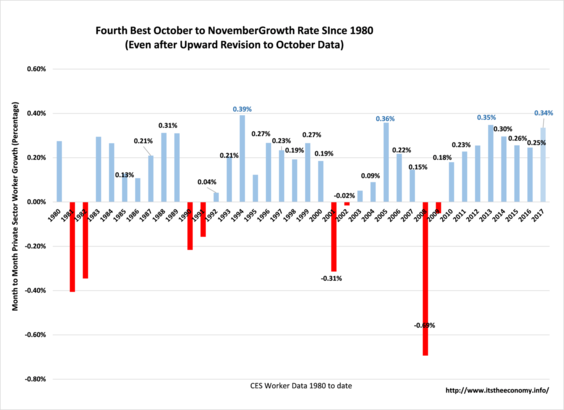 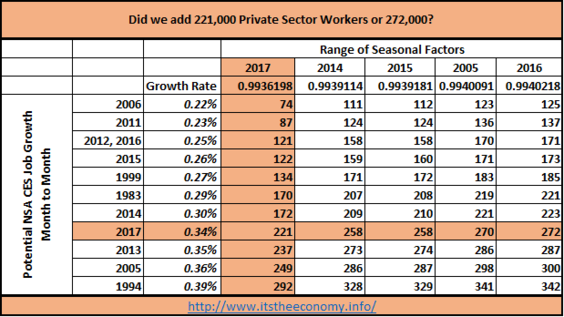 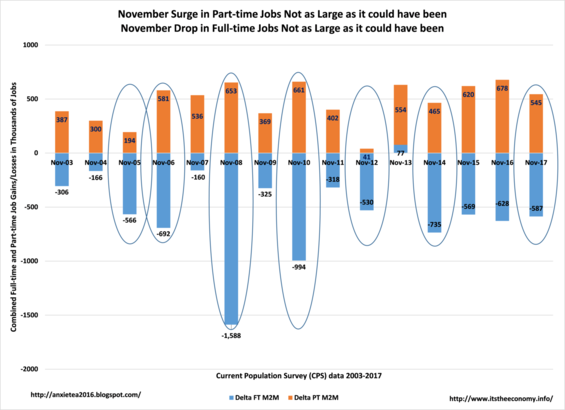 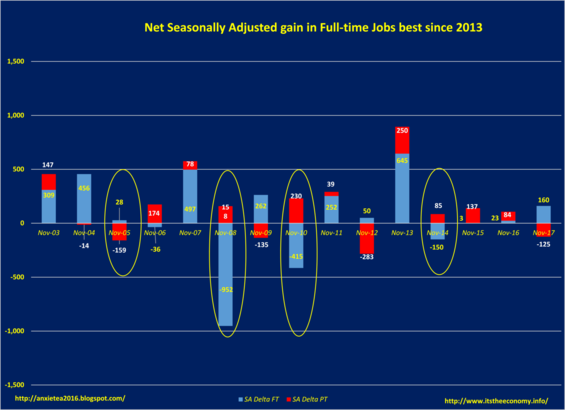 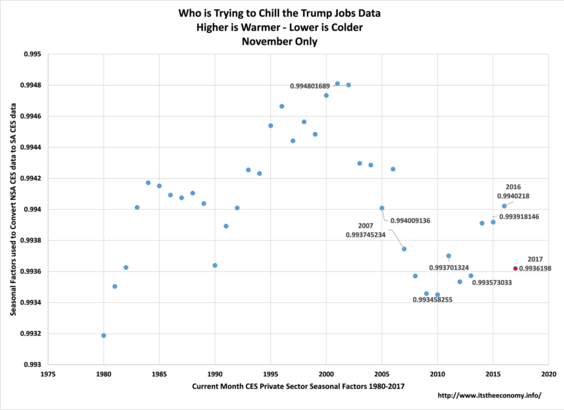 Strong Jobs Report Should have been Reported Stronger - 302,000 Workers

The column produced the article "November Jobs Forecast: Holiday Cheer" as a forecast column for the November Employment Situation Report. This article projected that we should see a spike in part-time jobs, a drop or very slight increase in full-time jobs, and a slight gain or slight drop in unemployment levels. The spike in part-time jobs was almost "guaranteed." The unemployment levels have dropped from October to November since 2009. Normally the unemployment level, U3 unemployment, bottom during November and Rises in the December and January Jobs Reports.The question raised was whether or not the slight uptick in the weekly Continuing Claims level from Mid-October to mid-November would be reflected in the U3 number or if the trend would be our "friend" and see U3 drop. It was also anticipated that we would see a spike in people working multiple part-time jobs. It was thought that we could see a large spike in seasonally adjusted Current Employment Statistics (CES) Private Sector workers.

This column also published an article in advance of the ADP Payroll report titled "What to Expect from Nov. ADP." It was projected that we would grow seasonally adjusted jobs from the October level in all but one sector, the Information Technology Sector, or IT sector. It was thought that we could see November Jobs level drop in four sectors, the IT sector, the Professional Business Service sector, the Other Service Sector, Construction and Natural Resources. We saw just the opposite. We saw declines month to month in the seasonally adjusted jobs data in four sectors (Construction, Natural Resources, IT, and "Other Services.") We saw a spike in Manufacturing, Professional Business Services, and the Leisure and Hospitality sectors.

The concerns are growth rates, seasonal factors, and revisions to prior data.  It is expected that the non-seasonally adjusted (NSA) CES private sector worker growth rate will be comparable to what we saw during 2013 and 2014. If last month's data is revised higher by 25,000 claims, for example, then that "takes" 25,000 claims away from this month. The reverse is also true. The seasonal factors can skew the data higher. It was projected that we would use seasonal factors similar to 2014, 2015 or 2016. It was projected that we could see up to 300,000 seasonally adjusted private sector workers added. So what happened?

The Seasonally adjusted Private Sector number rose by 221,000. The "headline number" is often reported as the non-farm payroll (NFP) number was 228,000. The NFP number does not include government workers. The CES data measures workers, not jobs. The thing to note here is that the September seasonally adjusted data was revised up by 15,000 workers. The October data was revised higher by 30,000 seasonally Adjusted workers. This means that we could have seen a number of 251,000 if those revisions were not done. Upward revisions should be garnering some attention.

The Non-Seasonally Adjusted Private Sector number jumped by 420,000 workers. The 0.34% growth rate from October to November was the fourth best jump since 1980. The seasonal factor used to convert the NSA data to the SA data was lower than those used for 2014, 2015, and 2016. If last year's seasonal factor was applied to this year's growth rate the number should have been reported at 272,000. Throw in the 30,000 that were added to October and the number is 302,000.

The Current Population Survey Data Recorded that Lost Fewer Full-time jobs and added fewer Part-time jobs than we have the past three years. We did not quite add enough part-time jobs to offset the full-time jobs lost. We have had net, NSA job loss seven of the past fifteen years, including 2010, 2012, and 2014.

The Current Population Survey Reported that we added full-time jobs and lost part-time jobs, just the opposite. It also reported a net gain in jobs, opposite the results of the NSA data. This is the fallacy of seasonally adjusted data. Sometimes up is down and down is up. Red pill, blue pill.

The Unemployment Number Reported and Recorded Increases from the October Level. This was anticipated. The continuing claims data bumped higher from mid-October to mid-November. This was normal during the period of time from 2003 through 2008. No big deal. The workforce population grew too.

The Real Unemployment Rate is still over 9%. There is a number that started receiving attention back during the 2008 election: The U-6 unemployment, or underemployment, rate. This column has written numerous articles for years that the lower participation rate is skewing the unemployment rate lower. There are "missing participants." If we had the same participation rate right now that we had during November 2006 then we would have 9.4 million more participants, employed or unemployed. They are not employed, and the "Red, Gray and Blue" series shows that they aren't "retired" either. They are effectively unemployed.

The Number of people working multiple jobs rose from 7.4 Million to 7.6 million. This means that the participation rate could have been higher is those 200,000 jobs went to the 9.4 million. Some probably did. The seasonally adjusted multiple job worker data jumped from 7.188 million to 7.323 million. A future article will dig into the data.

This column will also look at the accomplishments during President Trump's first ten months in office as compared to Presidents Reagan, Clinton, George W Bush, and Obama. This column will examine the data as it relates to men and women in the continuation of the "War on (Wo)Men" series. Next week this column will also dig into the sector data and see how it compares to the seasonally adjusted ADP data. Finally, this column will produce an article that examines the employment and unemployment data by age group. This is a looking like a very Merry Christmas is right around the corner. 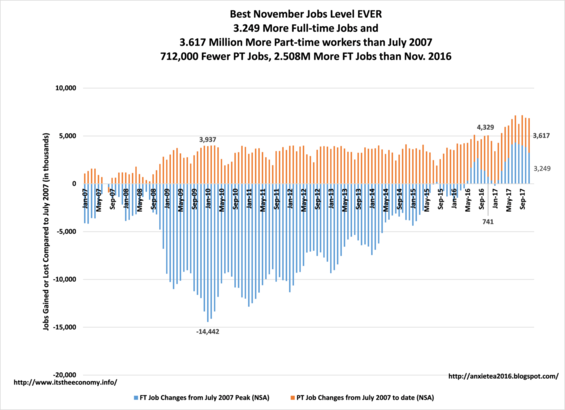 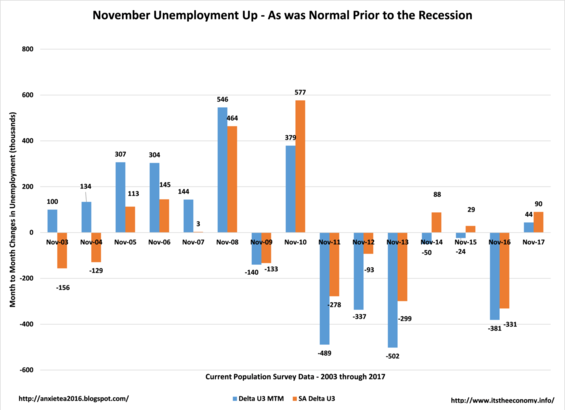