Two reports were released at 8:30 AM this Wednesday, November 15, 2017: The Consumer Price Index (CPI) Report and the Monthly and Annual Retail Trade Survey (MARTS) report. The inflation number was solid, and another column will dig into that data. The MARTS data was beyond solid. We are on pace for a record retail sales year.

We are on pace for the best retail sales year ever. Motor Vehicle and Auto parts leads the way. We are also seeing record levels of sales at Food and Drinking Establishments and Food and Beverage Stores. People are buying more at grocery stores. People are eating out at restaurants and bars. Gasoline stations saw sales greater than during October 2007, yet still considerably lower than what we saw during 2012. The "gasoline stimulus" is alive and well. So is the tax depressant.

We are on pace for the best retail sales year ever. So far, year to date, we have seen 4.690 trillion dollars in sales. Last year, as of the month of October, we were at 4.498 trillion dollars. This is a growth of 4.27%. Last October the annual growth rate was 3.0%. This makes a huge difference in the economy. The GDP is weighted by approximately 70% consumer spending on any given month. This could get us to 2.9% GDP for the entire year. We are not in a Retail Ice Age. We are shifting from stores to non-store retail. There will be some things that "cannot" be bought on-line.

There were month to month declines and October to October gains. We saw smaller than usual month to month declines in the Motor Vehicle and Parts sector, the Home furnishings sector, and the Building Material and Garden Equipment sector than we normal see. We saw larger than usual upticks elsewhere. Even Electronics saw an uptick from the October 2016 level. Sporting Goods and Hobby sales are down month to month, October versus October, and this year compared to last year.

Normally we see growth accelerate into the end of the year. If annual retail growth exceeds 4.5% then the GDP should rise by over 3% for the entire year. There is no Retail Ice Age. We are changing where we shop, and how we shop. We may see retailers hire more workers to help improve the "off-line" experience. This was a solid report with solid revisions. Cheers! Eat Drink and be Merry during the rest of the year. 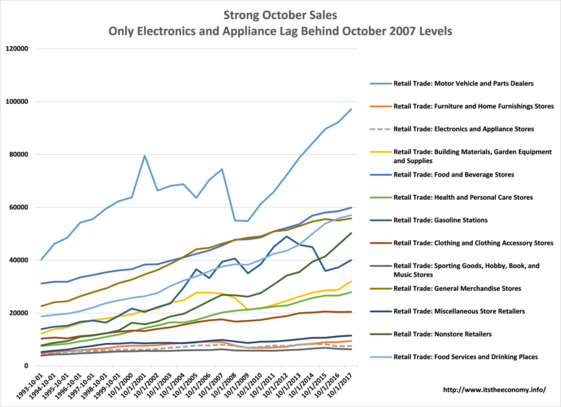 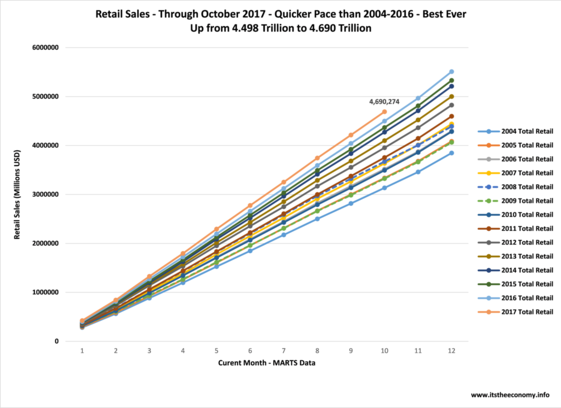