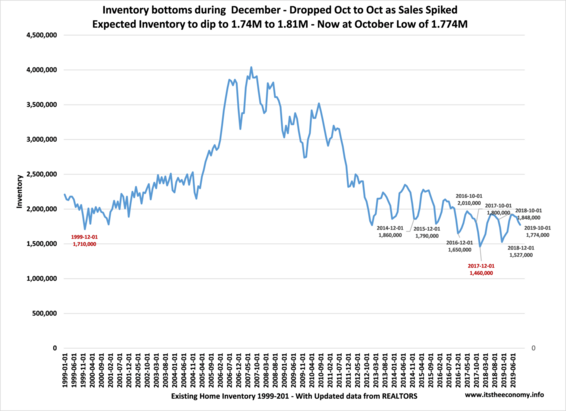 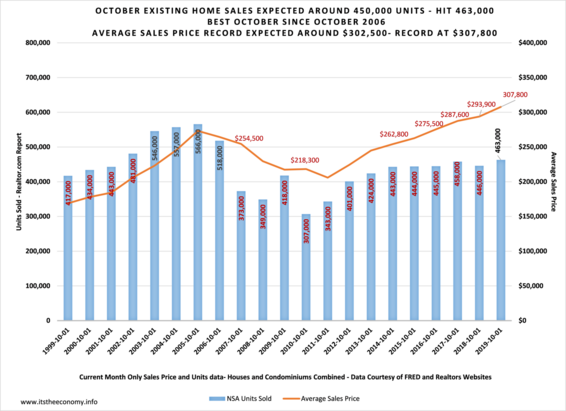 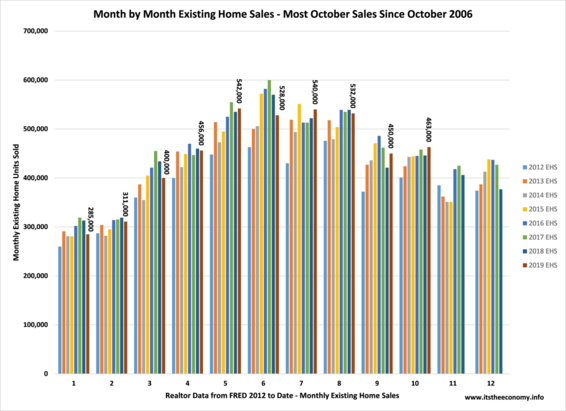 This column projected strong existing home sales data, a record October Average Sales Price, and declining October Inventory in "Oct. Real Estate Expansion Should Continue."  We "normally" sell roughly 450,000 units during October. Inventory normally is expected to grow Year to year and possibly decline month to month during October. These are mutually exclusive this year. Units sold could have increased or declined month to month and October to October. Inventory impacts sales. Current year sales are expanding. Supply and demand dictates rising prices. It was thought that we could see a spike of 3% to 9% in average sales price over the October 2018 level. The overlap between month to month and October to October expectations are in the range of $302,000 to $308,000 for the average, mean, sales price.

Three of the last four months with same month  year over year increases in existing home sales. Normally we have peak sales during June. This June the existing home sales was underwhelming. We have seen same month declines frequently since 2016. This is a sign that consumer confidence is rising. Some of this could be record levels of full-time jobs. Some of this could be emergence from the prohibition period for mortgages for those who have gone through bankruptcy or foreclosure.

Inventory dropped less than expected.  The inventory level normally declines during the Fall and Winter, hitting the annual low during the month of December. It was expected that inventory would fall to between 1.74 million and 1.81M units. The inventory fell to 1.774 million units. Inventory has been the name of the game since December 2015. We have seen some improvement this year. It has been improving or declining slightly from last year's same month level depending upon the month of the year.

This "Housing Recession" is waning. The Great Recession was a Housing Recession followed by a jobs recession. The Jobs Recession was followed by a Retail Sales Recession. We recovered from the Retail Sales Recession first, followed by the Jobs Recession. The Current Population Survey (CPS) Jobs number did not remain above the July 2007 level of Non-Seasonally adjusted (NSA) full-time (FT) jobs until February of 2017. We saw a mini-recession during 2010-2011 and another during 2014. The current year (CY) data and the rolling year (RY) data on growth have been declining since 2015, roughly when the inventory started to fade. The CY data is growing faster than the RY data. This indicates year over year growth as a possibility this year. It will be close.

If you watch one news channel you may not have heard that this was a strong report. The mortgage rates were noted. The Existing Home Sales report must have been reported while I stepped out of the office for a scant moment. This data was strong. It was stronger than the "experts" expected. It was very much in-line with what this column projected. We saw our best October for units sold since 2006. This was a possibility. The Average Sales Price Record for October was Set. This was anticipated. Inventory fell. This was understood as a "given." Inventory fell less than it could have fallen.

All real estate is local. Sales prices change by community, neighborhood, age and style of the home or condominium, condition, and school district.  Contact a Realtor to see what your home is worth and what is available.