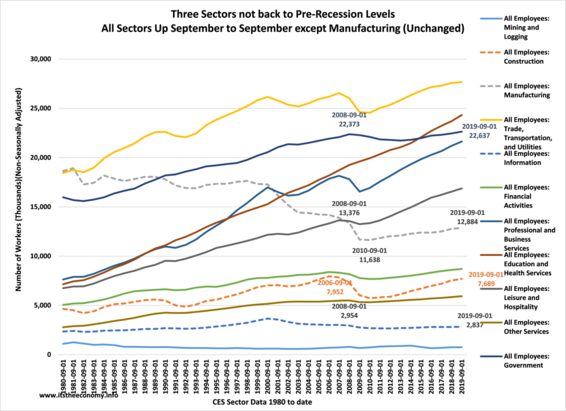 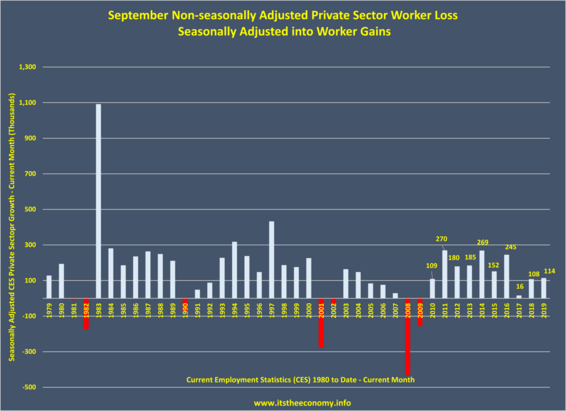 Seasonally Adjusted Manufacturing Jobs Fell - This was a concern to some.

September is one of the months for which seasonally adjusted data was "created."

We are still positive for non-seasonally adjusted workers compared to last September. We are still climbing the Workers Mountain. This column, and its sister site "Reclaiming Common Sense" discovered that here was a Jobs Iceberg under former President Obama.  The article "2-10 Rate Inversion is not the best indicator of a recession" identified the Jobs Recession Indicator was a better indicator of potential recessions.  The same can be said about the private sector worker data. We had 11.371 million fewer private sector jobs during January 2010 as compared with July 2007, the peak CPS jobs month. The annual peaks are peaking higher than the trend line would predict. The January lows are not dropping as low as the other trend line would indicate. We are not having a Jobs Recession nor a Worker Recession.

Hourly Wages were at all-time record highs for 9 out of 10 sectors this month. These were not just September records, they were all-time records for hourly wages.  The Non-seasonally adjusted average hourly rate improved from 1.55% to 6.08% depending upon sector. The data has to be properly weighted with the number of workers working at those average hourly wage.

Hours worked increased by 1.36%. The hours worked dropped September to September for Manufacturing, Trade, transportation and Utilities (TTU,) Financial Services (FIRE,) Leisure and Hospitality (LAH,) and Other Services (OS.) It is important to note that Mining and Logging (M/L,) Construction and Manufacturing are still working in excess of 40 hours a week, on average. It is also important to note that hours worked, already at part-time levels, fell September to September even though wages rose by nearly 5%.

When hours worked and hourly wages increase Income Increases at a higher rate than either of them alone. Total income increased by 2.54% to 6.63%  depending upon sector. There were seven sectors that saw hours remain unchanged from last September or decrease where total wages rose. The growth rate of total wages was great than the increase in workers for each sector. This is real growth.

This report was a good report. We had September to September improvement in hours worked, for most, hourly wages "for all," and growth in all but one sector. Construction, Manufacturing, and IT still have not returned to their September 2007 level. All three sectors have been on an upward climb, including IT.

How is President Trump doing compared to his predecessors? That will be addressed in "Five Presidents at 32 Months." 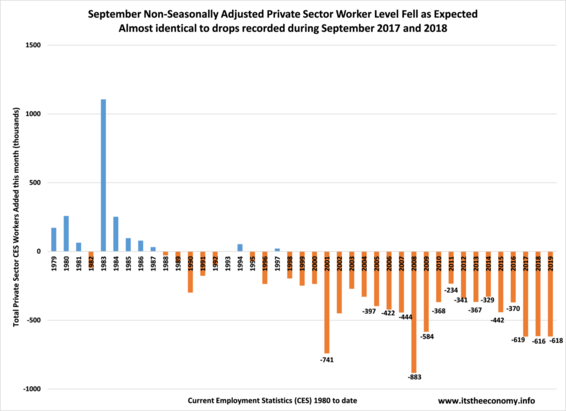 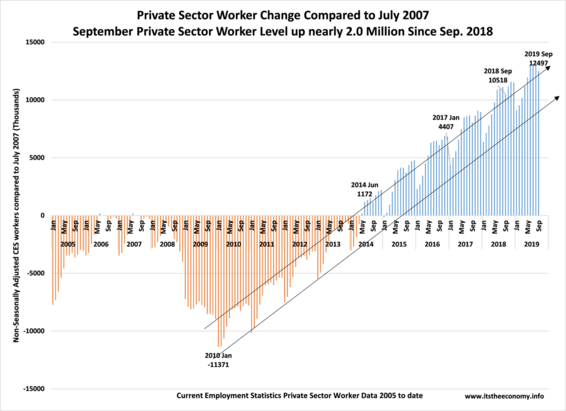