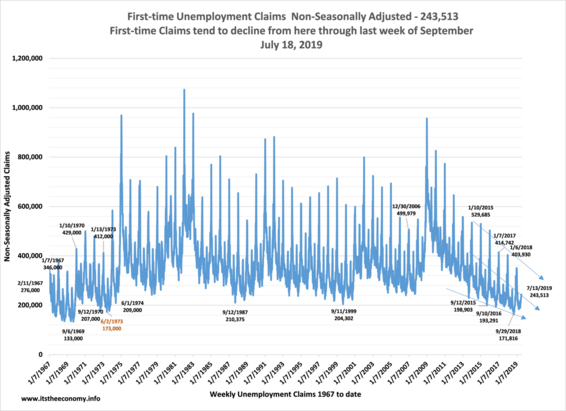 The weekly unemployment claims reports received considerable attention as the seasonally adjusted (SA) first-time unemployment (FTU) claims fell from 400,000 to 300,000 claims. They received more attention as the :Consecutive Weeks "Streak" hit fifty weeks and then 75 weeks. This was a FACT (False Assertion Considered to be True.) This streak has been ongoing since March 7, 2015. The Continuing C;aims (SA CC) Streak has been ignored. This streak really has been ongoing since April 1, 2017 (No April Fools here.) It doesn't appear that anyone else is covering the historically low Insured Unemployment Rate (IUR) non-seasonally adjusted (NSA) What was recorded (NSA) and what was reported (SA) this week?

The Non-seasonally adjusted first-time claim jumped a little - as is normally during the second week of July. The NSA FTU came in at 243,513, which  is comparable to what was recorded the second week of July 1968. Some in the media may have been concerned that this is 11,000 NSA FTU claims more than last year. The thing to remember is that we have 2.2 million more covered insured, and that the covered insured number was revised higher this week.  The overall trend is downward. The seasonally adjusted FTU was reported at 216,000. The SA FTU could have been reported under 190,000.

The Non-seasonally adjusted Continuing Claims data was recorded at 1.699 million claims. The NSA CC value is 73,000 claims fewer his year, for the first week of July, than it was last year during the same week of the year. The continuing claims data trails the FTU claims by one week. Once again, this is a generational low for continuing claims. The last time the NSA CC was this level was the first week of July 1973. The SA CC was reported at 1.685 million claims and could have been reported slightly higher or slightly lower than it was reported. Seasonal factors matter.

The Insured unemployment rate ticked higher, as is normal for this time of year. The insured unemployment rate (IUR) is the percentage of the covered insured who are receiving benefits. This year the NSA IUR was recorded at 1.18% compared to 1.25% last year. This is significant because last year the all-time low was recorded at 0.95%. Could we drop down to 0.88%? We had never recorded an IUR of 1.00% before 2018.

We have to watch the values for the continuing claims and IUR next week. The weekly claims data is a different data set from the Current Population Survey (CPS) jobs and unemployment data. That said, if the NSA CC value drops mid-June to Mid-July it may indicate a drop in the NSA U-3 unemployment level. The NSA JOLTS Job Opening and Labor Turnover Survey data set a new record for the month of May. This is yeat another data set that is misunderstood. The JOLTS data is comparable to, not identical to, the Current Employment Statistics (CES) worker and wages data. The CES data is not related to the CPS data other than they are released in the same report on the same day of the month, the Employment Situation Report, or Jobs Report. The JOLTS data lags one month and one week behind the Jobs Report. This month we received the May JOTS report and the June Jobs report. 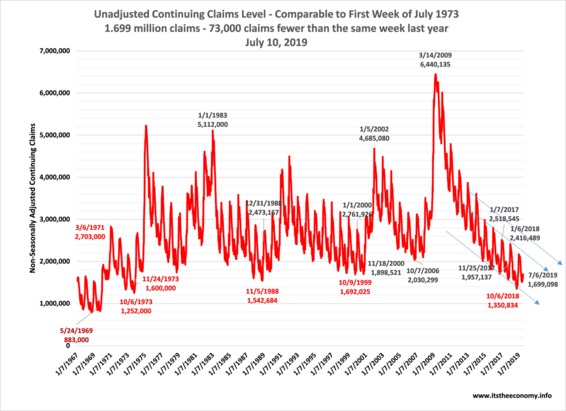 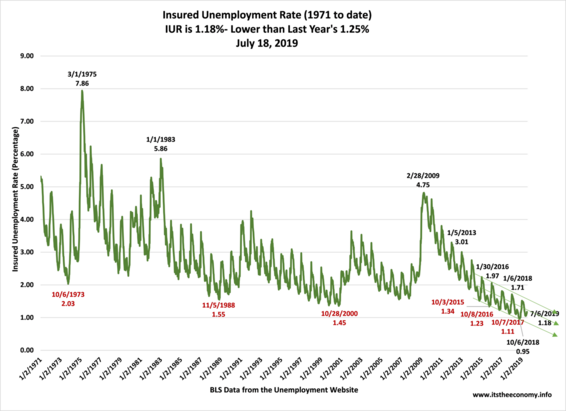