Is a 5.75 Trillion Dollar Economy within Reach? This column has written regarding the possibility of a $6 trillion dollar economy. We have seen year after year of increasing retail sales growth since the recession ended. Right now, after eleven months, we have seen sales exceed the end of year sales for 2013. We are at virtually the identical level we saw after 12 months during 2014. We are going to exceed the total sales we had during 2016, the question is by how much?

Pay attention to the reports and the data in the reports. The data is great. The revisions for the MARTS data has been great. Instead of talking about salacious senators and all the negatives in the world, focus on the solid economic data. What Retail Ice Age? 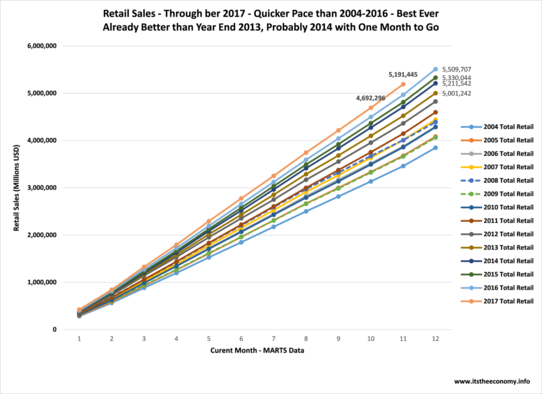 November Sales were up by 6.35% over the November 2016 Level. The largest growth was seen in the Gasoline Stations, the BMGE Sector, and Non-store retail. These are the same leaders in growth for the first eleven month of the year versus the same period last year. The largest real gain was seen in the Automobile and automobile parts segment. The data for the current year shows weakness in the Electronics and Appliance Sector, the Sporting Goods, Hobby, Book and Music sector, and the Health and Personal Care Sector. last month we were on pace for a record retail year. This month the 12 month rolling year growth rate edged higher. This means that we are still on track for a record retail year.

We were seeing Deflation during 2015 and that shows in the retail sales rolling year data.  Total retail sales were growing at 0.93% during January of 2016. We have seen steady improvement to the growth rate since that time. The 4.51% annual growth rate is the second highest rate of the year, second only to January 2017. January is a huge retail month as people return items received at Christmas, exchange and add to those purchases, and use gift cards that were received in their Christmas Cards or in the stockings by the fireplace. 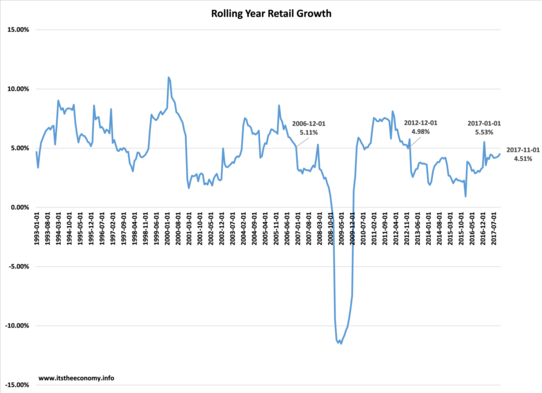 If you were watching the news this morning you wouldn't know that we saw some seriously surging November Retail Sales data recorded this past month, No matter how you look at the data, other than the perennially lagging Electronics and Appliance Sales data, there were huge November to November gains. Only two sectors remain below where they were during 2007.

Only Electronics and Appliances and Gasoline Station Sales are lower than they were during November 2007. It has been a common theme for this column that we have seen an incomplete recovery. We saw the "Jobs Iceberg" where millions of full-time jobs were lost while part-time jobs were being added. When President Obama left office there were fewer full-time jobs and more part-time jobs than at the peak of the pre-recession jobs market during July 2007. Men have struggled to recover full-time jobs while women have added millions of full-time and part-time jobs. The retail data has seen problems with the electronics and appliance sector for years. The "gasoline stimulus" due to low prices at the pump was thought to be a good thing. Furniture sales were struggling. Even the Building Material, Garden Equipment and Supplies (BMGE) sector was a bit sluggish 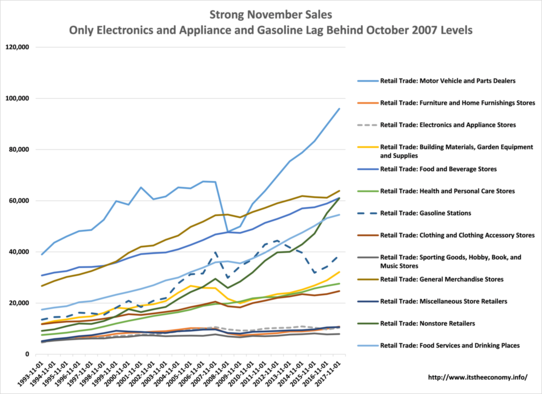