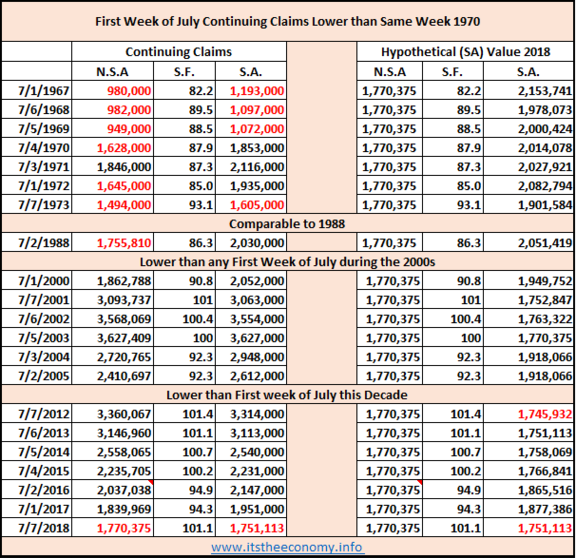 The weekly unemployment claims data used to be headline news at the bottom of the hour  most Thursdays during a stretch from 2008 through 2015. The "magic number" was 300,000 seasonally adjusted (SA) first-time unemployment (FTU) claims.  The non-seasonally adjusted (NSA) FTU claims peaked during January 2009 and tend to spike the first week of January and the first or second week of July. The NSA FTU claims tend to bottom out the final week of September. The data for the continuing claims level trails the first-time unemployment claims data by one week. This means that we should see some sort of spike the week in continuing claims.

The Obama administration used to make a big deal over the seasonally adjusted first-time unemployment claims streak. This was an economic urban legend created through manipulation of the seasonal factors. It never really got going, there were many reboots, and the streak almost always ended around Thanksgiving. We have seen the NSA FTU drop below 200,000 claims this year. You would not know this unless you read this column and the articles written on the subject. What happened this week? We are experiencing TDS: Trump De-Unemployment Syndrome. #TooMuchWinning

The Non-seasonally Adjusted First-time Claims Recorded a Drop. The NSA FTU Claims was 264,869 last week and was 231,347 Claims this week. The authors of the report noted that this was the lowest SA FTU claim level since December of 1969. The SA FTU level was reported at 207,000. This is down from 215,000. This is the lowest it has been during the second week of July since July 12, 1969.The SA FTU value could have been reported at 204,000 if we used the seasonal factor from 1969 then we would have seen a level of 204,000 SA FTU claims reported. It could have been reported under 200,000 if the seasonal factor from 1967 was used. This is seriously good. The pitchfork graph is projecting for a NSA FTU value of under 175,000 this Fall.

The Continuing Claims Number bumped up, not as high as it could have jumped. Somehow, even though the NSA FTU value only bumped up 33,000 claims between June 30th and July 7th, the continuing claims value jumped by 134,000 claims between the same two dates. The NSA CC value jumped from 1.636 million to 1.770 million claims. This is the lowest the NSA CC value has been during the first week of July since July 1988. This level is lower than it was during July 3, 1971.

We need to watch next week's continuing claims level. The continuing claims level should drop next week. This is the value that will be collected closest to the Employment Situation Report data collection date. This column has referenced that the Weekly claims data measures something totally different than the Current Population Unemployment Claims data measures which measures something different from the JOLTS Jobs openings data.  Different surveys, different margins of error. The unemployment level could bump higher as more people look for work and say that they cannot find work to the survey takers. Could we see a SA FTU value under 200,000 this Fall? Yes. This assumes that they do not change the seasonal factors before October. Will Continuing Claims drop below 1.5 million claim this Fall? Probably. Will it drop below 1.25 million? Doubtful. We just have too many workers. The data still has relevance. 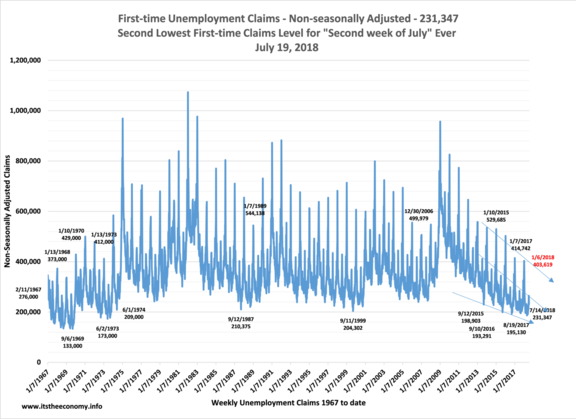 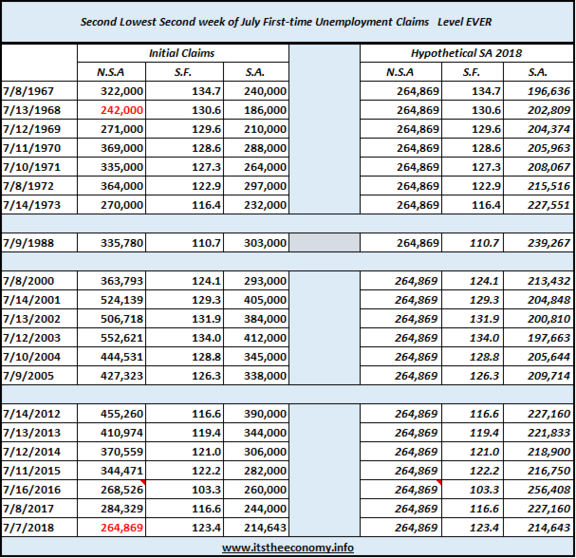 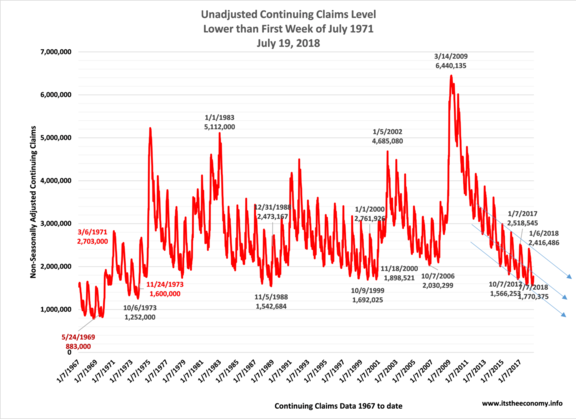