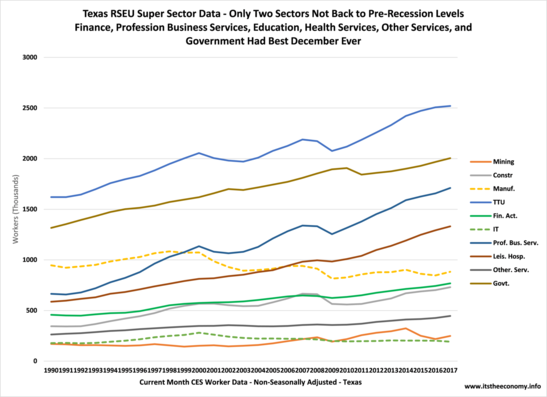 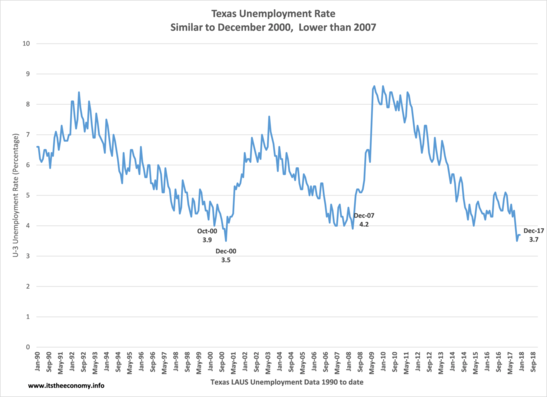 Texas suffered substantial damage this past hurricane season. It was thought that the hurricane damage to Texas and Florida would negatively impact the National GDP and that the 1-2 punch could have stalled or ended the solid economic growth experienced during 2017. The weekly unemployment claims data did spike after the landfall of Hurricane Harvey. This column has written a few articles regarding this topic.

We saw the best December data for Seven Sectors. Construction, Trade, Transportation, and Utilities, Financial Services, Professional Business Services, Education and Health Services, Other Services, and the Government Sector had their best December Data ever. The manufacturing sector has recovered from the recession. It has rebounded from the 2009 low, it was lower than December 2007, and even a bit lower that December 2014. Mining and Logging saw surges during 2011, 2012. 2013, and 2014,. Those gains retreated during 2015 and 2016. The growth during 2017  rebounded to levels comparable to December 2011 and December 2015. Information and Technology saw peak employment in Texas during 2000.

There were significant revisions to the national Current Employment Statistics data during January. This will probably be reflected next month when the State data for January is released. The good news is that the Texas Economy has had a Texas sized recovery from the hurricane. There is still room for improvement in Mining and Logging and Information Technology, as well as Manufacturing.