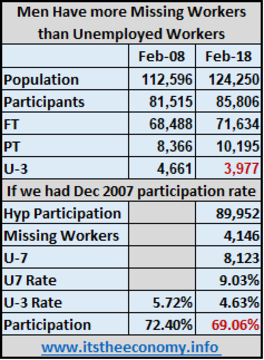 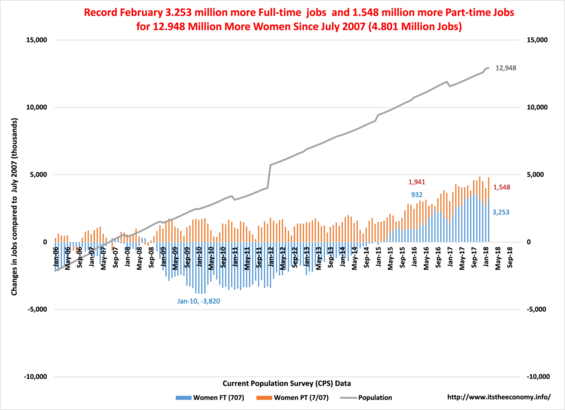 This column writes many series of article regarding the jobs report data. One of the other series is the "War on (Wo)Men" series. There was a "War on Women" issue that was created during the 2012 Presidential Election. That topic reared its ugly head during the 2016 election, too. The real war was a war on the male worker. Men lost over 10 million full-time jobs from the pre-recession peak of July 2007 to the depth of the recession during January 2010. Women lost nearly 4 million full-time jobs during the same period of time. This created the "Jobs Iceberg" where there were fewer full-time jobs at the end of the Obama administration during the January 2017 Jobs report period than during the Bush July 2007 Jobs Report.  The women have been winning the Recovery. Where are we this month?

Men saw a surge in Full-time Jobs - Still Fewer than July 2007. Men added 363,000 NSA FT jobs during February. They also added 420,000 part-time jobs. These numbers do not match the headline numbers that you may have heard because of the difference between the SA CES data and the NSA CPS data. One measures worker while the other measures jobs. Men also saw their unemployment level drop by 102,000 workers. Even after adding nearly 400,000 NSA FT CPS jobs they is still a deficit of 71,000 FT Jobs compared to July 2007.  There have been 2.359 million jobs created for 12 million more male workers. This will bring the workforce participation rate down.  This drop of 3.34% means that the official U-3 unemployment rate is not truly comparable to prior unemployment rates. If we look back a decade to February 2008 that difference means that instead of a official unemployment rate of 4.63% this past month that the "effective unemployment rate" is 9.03%

Women saw a surge in full-time jobs and part-time jobs, too. Women were the first to fully recover all the full-time jobs that they lost during the recession. Even since the Summer of 2015 more women have found full-time jobs than men. Women have added 3.253 million jobs since July 2007 and another 1.548 million part-time jobs. This means that they have added almost 5 million jobs. This is still significantly less than the 12 million women who have entered the workforce since July 2007. Their workforce participation rate has also declined. They too have an artificially low official U-3 Unemployment rate. Officially their unemployment rate is 4.11%. If they had the same participation rate that they had a decade ago they would have either many more jobs or an unemployment rate of 7.37%.

There is a considerable amount of good news in this report. Men have added almost 1.7 million full-time jobs over the past year. Women have added over 2.3 million full-time jobs since February 2017. This is still an incomplete recovery. We need to keep getting men back to work. We need  at least 2.6 million more jobs for women and at least another 4.2 million jobs for men. If we continue to see improvement in the Manufacturing sector, the Construction sector, and the Mining/Logging sector then we may see those men rejoin the workforce. We would need to see a million manufacturing jobs and 200,000 construction jobs to return to the pre-recession levels. We are almost back to the pre-recession level for mining, needing just another 69,000 workers to break even. We should see a full recovery in construction and mining/logging this Summer. A Manufacturing recovery will take some time. 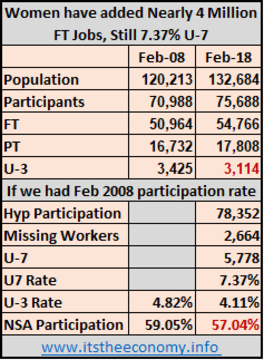 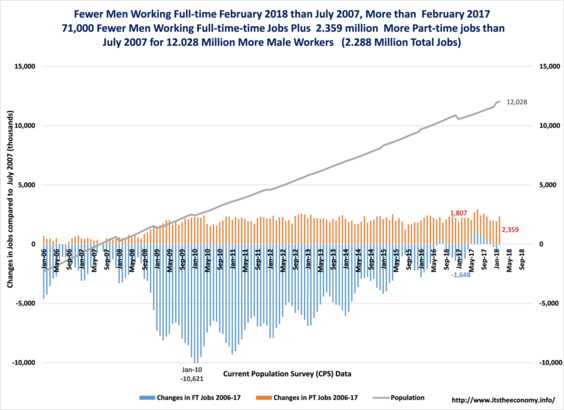