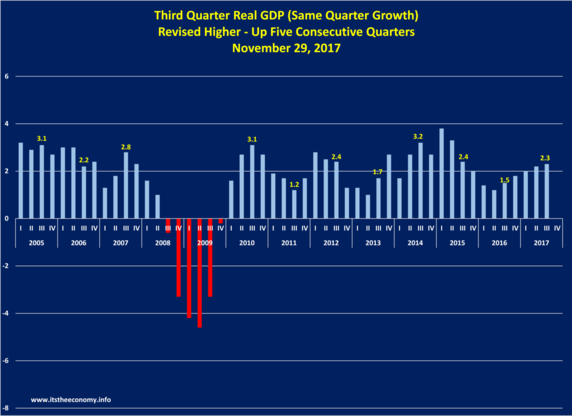 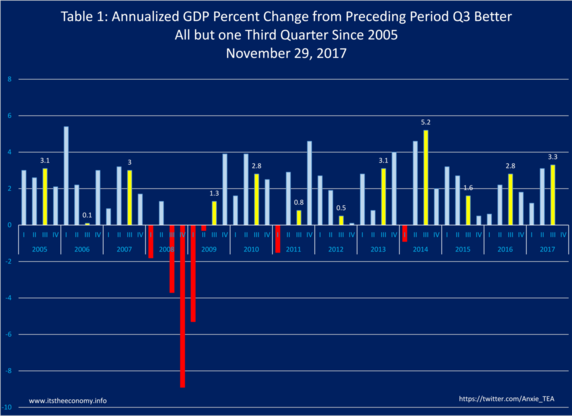 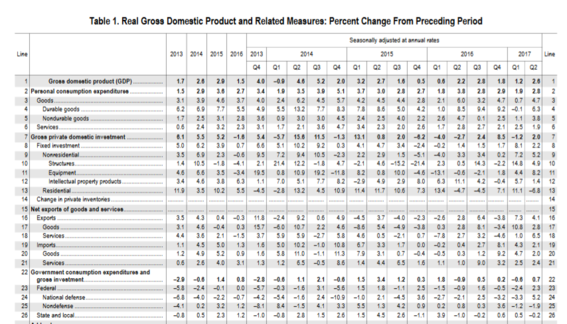 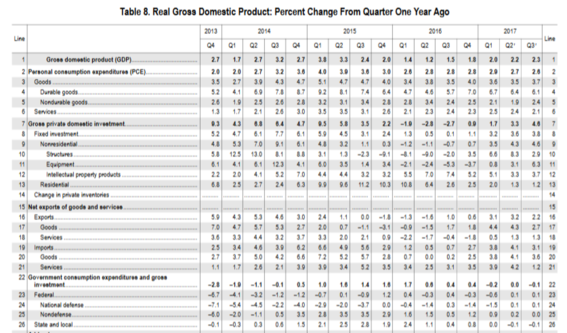 The Gross Domestic Product (GDP) measures the growth in the economy. An economy with 3% annual growth is considered healthy. The best end of the year Real GDP growth we received since 2007 was 2.9%. The past two quarters we have seen over three percent growth each quarter. Today's GDP report is the first revision to the third quarter GDP. The Advance number was 3.0% for the Second Quarter Annualized GDP. This headline number represents where the economy is heading if it continues to grow at the same rate as it did last quarter for the next three quarters. The Real GDP number was reported  during the past twelve months. The Annualized GDP is greater than the Real GDP so the economy is growing.just over 2% last month. This is where we have been. WE were heading into a slowdown from the First Quarter of 2015 through the second quarter of 2016.

The main components of the GDP to monitor are the Personal Consumption Expenditures, Gross Private Domestic Investments, Imports/Exports, and Government Expenditures. Personal Consumption Expenditures make up the majority of the GDP number and we are on track for our best retail year ever. Gross Private Domestic Investments include construction investments. We have a near record level of units under construction for residential units. The Government Spending has been a negative influence on the GDP due to the Sequester of 2011.  The most influential part of the GDP composite may be the Import/Export component. The world economy is growing. Someone, somewhere may be buying US made goods.

The Annualized GDP was revised higher from 3.0% to 3.3%. The Table 1 data shows strength in the Personal Consumption Expenditures data was up 2.2%, with a spike in Durable Goods. The GPDI data was up 7.3% - with Fixed Investment showing strength, especially Equipment sales. Exports are up with over 10% growth in exported goods.

Real GDP was revised higher to 2.3%. This is the ultimate lagging indicator, looking back at the last twelve months. We were growing at 1.5% during the third quarter of 2016. There was a sizable bump during the fourth quarter. Does this mean that we could be at a Real GDP rate of 3.1% by this time next year? Could it be even higher? The Table 8 data reveals that personal consumption expenditures growth of 2.6%  exceeded the GDP value, as did the GPDI value of 4.6%. Non-residential Structure were up. Non-residential equipment was up. Exports were up 4.1%. The only down component was government spending.

What is up with the contributions to the GDP? PCE only added 1.6% of the 3.3% for the Table 1 growth. GPDI added 1.2%. Exports added 0.43%. Is this a good thing? Normally retail sales make up the majority of the GDP with up to 70% of the weighting. We are seeing investments surge. This is good. This is great. The table 2 data from the preliminary report raises more questions than answers.

The takeaway from this report is that slow and steady growth has been happening during the past twelve months. The economy hit the accelerator during the fourth quarter of last year. The data that was being reported from Black Friday and Cyber Monday indicate that the economy is roaring to life. We will receive another Jobs Report, another revision to the third quarter MARTS data for retail sales, and another revision to the construction data, prior to the final revision of the GDP. This is good news that needs to be broadcast everywhere.