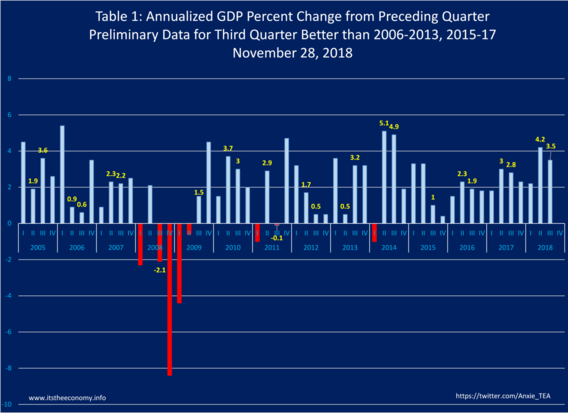 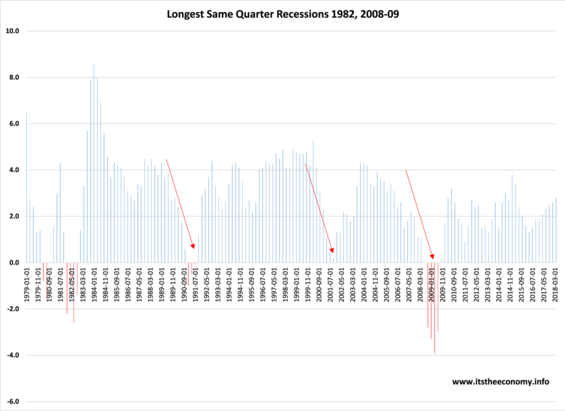 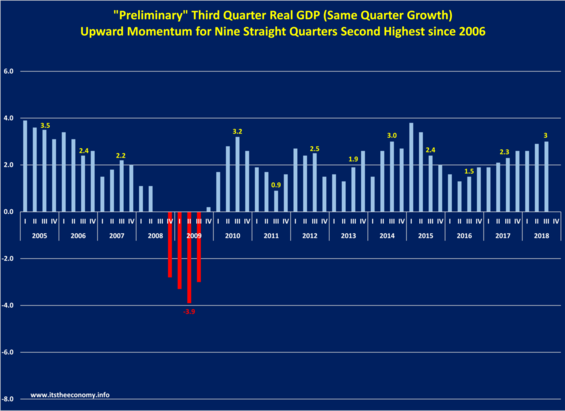 The first revision to the Third Quarter GDP data was eagerly anticipated for some in the media. Last month we received the advance third quarter GDP. We have had 36 consecutive months of same quarter GDP growth. This is good news. Disposable Personal Income is up 4.1% from last quarter and up 2.9% from the same quarter last year. This is good news because inflation is currently 2.28%. Personal Consumption Expenditures are up 4.0% quarter to quarter and 3.0% from third quarter of last year. Gross private domestic Investments are up 12.0% quarter to quarter and 6.3% from the third quarter of last year. The article "Third Quarter GDP - Growth in Private Domestic Investments" goes into the details.

"Chicken Little Economists and the Media Meltdown over the "looming" recession. It is important to understand that the headline number is the "annualized" GDP value data, seasonally adjusted, that indicates how the economy would  grow if we grew for one year at the same rate that we grew from second quarter to third quarter. A second metric is the same quarter GDP growth. This data "smooths out" the peaks and valleys of quarterly growth and tells us how we have done over the past four quarters. The closest that we came to a full year of 3.0% growth since 2005, was 2014 when it hit 2.7%. This same quarter GDP has been climbing since the second quarter of 2016. A recession is defined, generally, as six months of declining gross domestic product,  often as a result of declining retail sales, elevated unemployment, and stagnant wages. The article "MSM MAGA Recession Mania Misplaced" detailed how we are on pace for our best retail sales year ever, we have historically high levels of full-time jobs, historically low levels of continuing claims unemployment (adjusted for population growth,) and new construction expansion. There is no "looming recession."

How long can the current growth last? If we use this metric the longest period of GDP growth was between 1991Q4 and 2008Q3. The recessions that we have seen since former President Reagan took office has "all" happened after a prolonged period of Same quarter growth exceeding 4.0%. We exceeded 4.0% same quarter growth between the fourth quarter of 1996 through the fourth quarter of 1997 and from the fourth quarter of 2003 through the second quarter of 2004. We only had two quarters of over 4% growth during the second and third quarters of 2014 when we had growth of 5.1% and 4.9%. We have experienced longer periods of growth than the one in which we are experiencing at this time.

But the Third Quarter growth was still slower than the second  quarter growth. This is "normal." There are some Veruca Salt commentators who what "more." They want the goose that lays the golden egg (Willy Wonka Reference.) If you look at the "Annualized GDP histogram" you will see that we have had a lower third quarter after a higher second quarter during  2006, 2007, 2008, 2010, 2011, 2012, 2014, 2015, 2016, and 2017. Guess what? The fourth quarter GDP could be seasonally adjusted lower than the third quarter. This, too, is normal.

What was reported in the Same Quarter Growth data? The Same quarter GDP remained steady at 3.0% as GPDI, Imports and Exports, and GCE were revised lower and PCE was revised higher from their advance GDP values.  We have seen same quarter GDP growth for 36 consecutive months.

What Looming Recession? The mainstream Media has been trying to "will" a recession into being. They hate President Trump. This column produced the article "MSM Media Recession Mania Misplaced" that explained that the data is showing expansion, not slowing. Normally we have GDP growth, same quarter, over 4% before we head into a recession. Normally we have at least 6 declining quarters of same GDP growth before we fall into a recession. We have not peaked at 4% and we have not seen a quarterly decline since 2016. This means that we are at least 2 years away from a recession, unless a "Black Swan" event happens. Black Swans are unforeseen circumstances.

This data was "just" data revisions. The upward revisions and downward revisions to various components meant that we were unchanged. Fourth quarter GDP could be higher than the third quarter. We should not see massive revisions next year as we underwent a huge revisions of all the data back to 1929. The fourth quarter data should be better than fourth quarter of 2017, this means that the Same Quarter GDP will be over 3.0%, and this means that we should end the year with the first 3.0% print for the entire year since before the Great Recession.