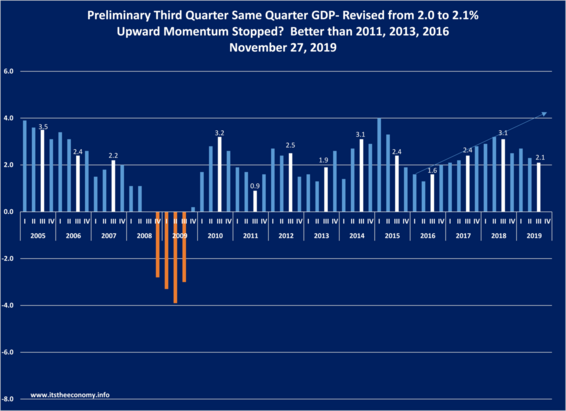 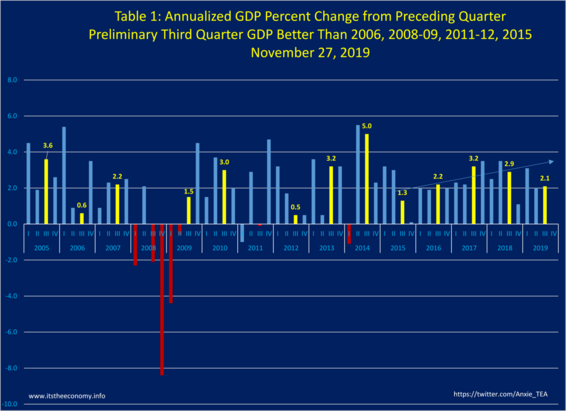 The Gross Domestic Product (GDP) is a measure of economic growth. There are three measures of GDP: Annualized (Quarter to Quarter) growth, Same Quarter GDP, and Annual GDP. The Annual GDP will be released after the first of the year, at the end of January. Each form of GDP has an "Advance Value, a Preliminary Value, and a "Final" value. These final values are revised with the release of the Advance Q2 Report. Last year the data was revised to 1929. This year the July revisions revised data back to 2014. This month only the 2019Q3 data was revised.

The Annualized GDP was revised from 1.9% to 2.1%. The media was lamenting the under 2.0% reading that was released last month. Doomsayers were pointing to a contraction in Gross Private Domestic Investments (GDPI.) What was reported this month?

The Same Quarter GDP was revised from 2.0% to 2.1%. There had been ten consecutive quarters of growth until the annual revisions. Growth during 2018Q4 and 2019Q1 were revised lower from their "final" values. We have now had four straight quarters of declining same quarter growth. We are still growing, just slower than first reported.

We still have one more revision to the 2019Q3 data before we receive the 2019Q4 advance data. We have a lower starting point from which to jump during the fourth quarter. This quarter's GDP was probably revised higher as the New Construction data was revised upward and the Retail sales data has been revised upward from their values that would have been reported since the release of the Advance GDP report. The October New Home Sales and New Home Construction data should boost Q4 GDP. The Record Retail Sales during October should also boost GDP. One quarter at a time.