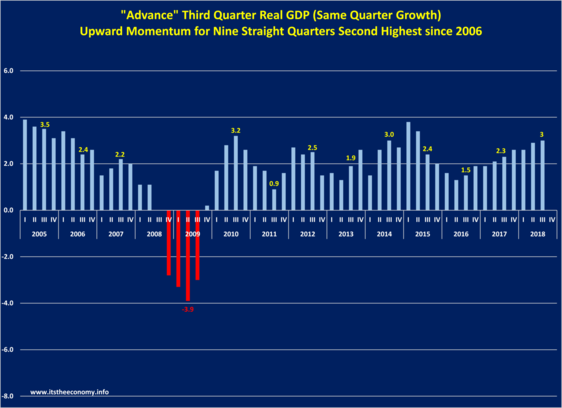 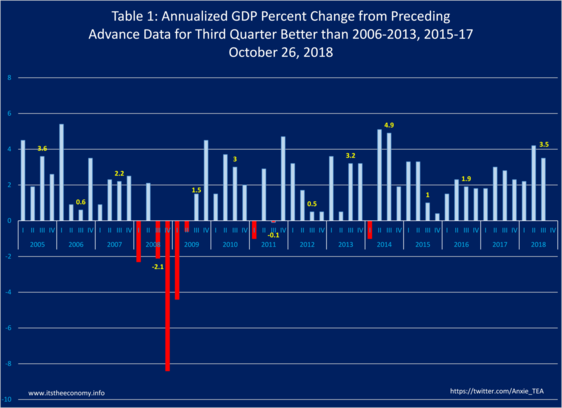 The advance third quarter Gross Domestic Product (GDP) report was released today. There are four components to watch in the quarterly report: Personal Consumption Expenditures (PCE,) Gross Private Domestic Investments (GPDI,) Import/Exports, and Government Consumption Expenditures. The headline number is the annualized GDP. This is the hypothetical growth rate if we grew for four consecutive quarters at the rate of growth for this quarter. A second measure of GDP is the same quarter growth rate. It is important to also keep track of the revisions to the data. This year the GDP data was revised back to 1929, reducing the quarter to quarter growth rates for President Trump to under 3% for the third and fourth quarter of 2017 and the first quarter of 2018. What was recorded and what was reported in the Third Quarter Advance GDP Report? (BEA 18-56)

This data was strong. Quarter to Quarter growth was reported over 3% during 2017Q2 through 2017Q4 prior to the revisions to the data from 1929 through the first quarter of 2018. We are seeing strong growth in Retail Sales that is going under appreciated. We are on track for our first $6 trillion retail sales year, according to the data in the September MARTS retail report. Non-seasonally adjusted sales were up 5.54% for January through September. We are on track for our best residential new construction sales year since 2008. We have fewer than 1% of the insured workers receiving continuing unemployment claims. This happened this year for the first time ever since the program's inception during 1967. It is also important to note that disposable personal income rose 4.1% from third quarter of last year and 2.9% from last quarter. More money to spend means a stronger economy.

A recession is not imminent. If you just look at the same quarter graph, you will see that the economy was sliding from 2005 through 2007 before it "dropped off the cliff."  Things are looking good for an end of the year growth rate of 3% or better for the first time in over a decade.