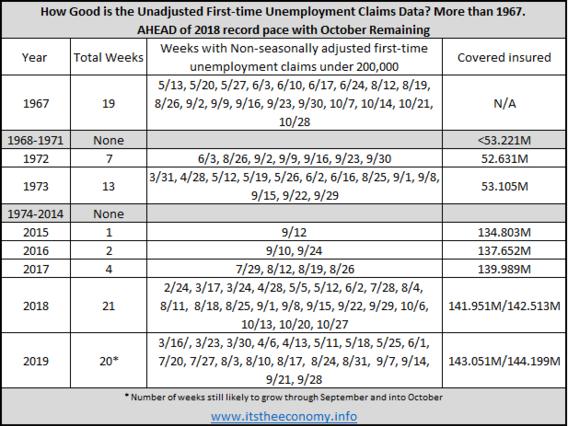 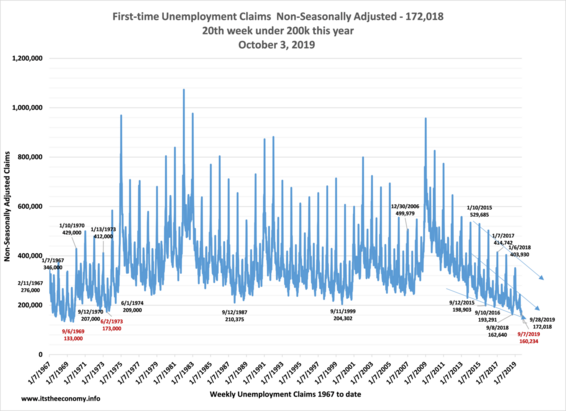 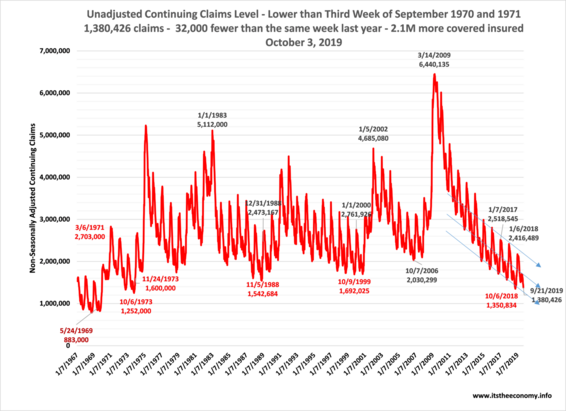 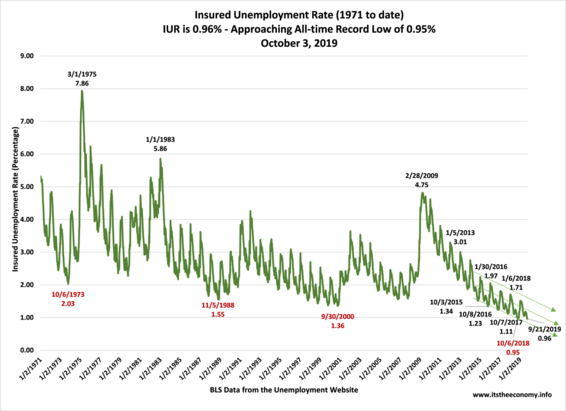 It used to be good when we had a seasonally adjusted (SA) FTU under 300,000 claims. Now they are talking about the number of week under 250,000 seasonally adjusted (SA) First-time Unemployment (FTU) claims. Another component to recognize is the Continuing Claims (CC) level. It was thought that 2 million SA CC was considered good. We have been under 1.5 million Non-seasonally adjusted (NSA) CC and have been pointing to a level under 1.35 million claims by the first week of October. The "most ignored" data point is the Insured Unemployment Rate, which was 1.01% NSA last week.  What happened this week?

The headline seasonally adjusted (SA) FTU number was reported up 4,000 claims to  219,000. Yes, the NSA FTU fell by 3,000 claims and the SA FTU rose by 4,000 claims.  The seasonally adjusted first-time unemployment claims streak is still intact. The week that we almost exceeded 300,000 was September 2, 2017. That was Harvey and Irma related. It was originally recorded "well under" 300,000 at 250,226 at reported at 298,000. Two weeks later the "final" NSA FTU was 250,621 and 298,000 SA FTU. The NSA FTU still stands at 250,621 while the SA FTU was elevated to 300,000 exactly. This streak dates back to March 7, 2015. The problem is that this was a manufactured streak. It was manufactured using skewed seasonal factors as was explained in the four-part series "The Seasonally Adjusted First-time Claims Streak Didn't Start when they Said it Did." There was a November 25, 2016 follow-up article "Unemployment Claims Streak Ends, Again." The seasonally adjusted data is really under 300,000 claims right now. It is being ignored.

The NSA Continuing Claims (CC) level dropped to 1.380 million claims.  Last year we hit our annual low of 1.350 million during the first week of October. This is normally the week of the year when the annual record is set. The lowest that it had been since the first week of November, 1988 was 1.542 million.We are 32,000 claims lower this week than we were the same week of September last year.

The SA CC level was reported down to 1.651 million claims.  The SA CC value could have been reported at 1.610 million. It was comparable to the level recorded during the week of September 15, 1973 when we had 1.297 million continuing claims. Back then we had 60.8 million covered insured compared to this week's 144.2 million. This means that we only have 83,000 more claims for 84 million more covered insured.

The Insured Unemployment Rate was recorded at 0.96%. This is only slightly higher than the all-time low of 0.95% set just last year, October 6, 2018. We have three weeks to drop below 0.95%. Eventually this value will rise. It is possible that this value may even rise above the same level that was present the same week the year prior to its release.  The question is whether or not this January will be lower than last January? Could we drop below the  2% IUR rate this January?

How low can these values fall? It was during 2015 that there was a minor uptick in the NSA FTU level before the traditional low week of the year.  The following week the data continued its drop.  There will be variations from year to year based on how the calendar falls and what the hurricane season is like that year. We just have to watch the peaks and the troughs. Eventually the NSA FTU level and the NSA CC level may be higher than it was the prior year simply due to record levels of workers being covered by unemployment insurance benefits. We have had nineteen weeks with the NSA level under 200,000 only during 1967 and 2018, and now 2019. We have only had 20 weeks of sub-200,000 claims once, last year. The IUR will give us some insight if that increases then there may be a change afoot.

Tomorrow we receive the September Employment Situation Report. We should see the U-3 unemployment level drop to a remarkably low level. This has nothing to do with the continuing claims data. The Current population Survey data on jobs and unemployment is one survey. The Current Employment Statistics on Wages and Workers is another Survey. The weekly claims report is a third series. The JOLTS data that we will receive next week is for August. The Job Opening and Labor Turnover Survey (JOTS) data is a fourth survey. They all have different sample sizes, different margins of error, and measure different things. Through in the seasonally adjusted data and commentators might as well compare their studio temperatures in Tempe,Arizona,  Tampa, Florida, Tomah, Wisconsin, and Toronto, Canada during the beginning of February.