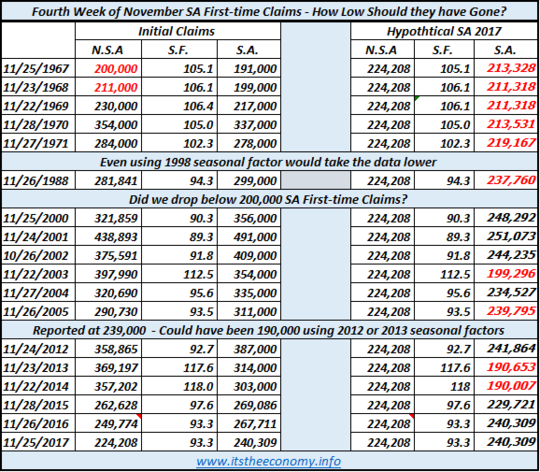 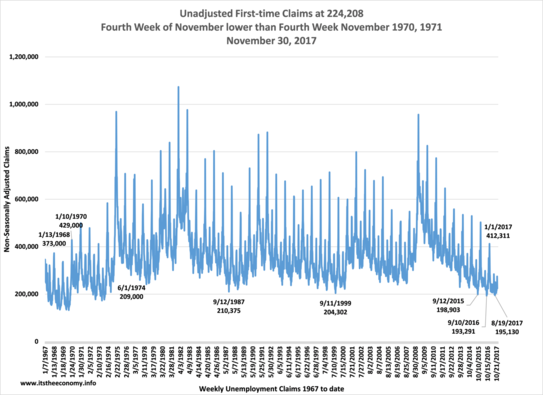 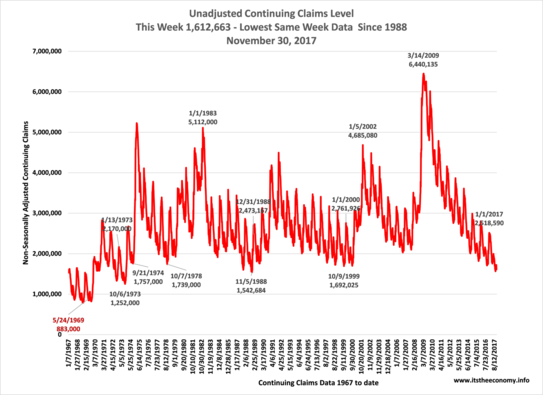 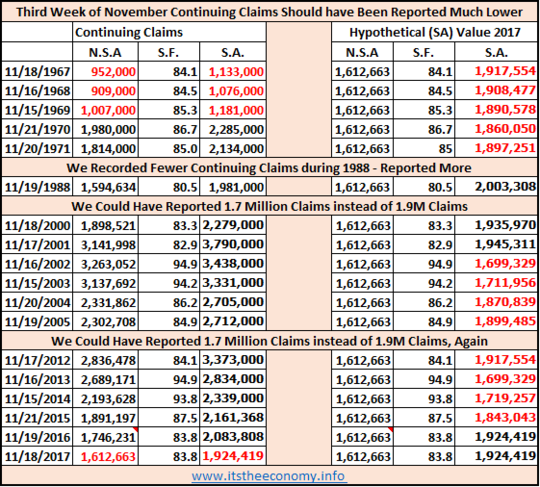 Last week the weekly unemployment claims report was released on Wednesday due to the Thanksgiving Holiday. The numbers were ignored because they are so good. The non-seasonally adjusted (NSA) First-time Claims number came in at 275,000 NSA claims and was reported at 240,000 seasonally adjusted (SA) claims. The Continuing Claims (CC) data was recorded at 1.714 million NSA CC and reported at 1.885 million SA CC. The media likes to report that the SA FTU number has been under 300,000 claims for years. This FACT (False Assertion Considered to be True) has been debunked numerous times on this website and its parallel site "Reclaiming Common Sense." Links to those articles can be found in last week's "Weekly Unemployment Claims: Thankfully Low." When seasonally adjusted data from different seasons, and different years, with different seasonal factors, and different numbers of "covered insured" are compared FACTs are created. It is like comparing an apple to a pomegranate. Both are red. Both have seeds inside. Both have some juice. You may want to east a caramel covered apple. You would not want to eat a caramel covered pomegranate.

The Seasonally Adjusted First-time Claims Level Should Have Been Reported Below 200,000 Claims - Forget the 300,000 threshold. If it was "good" to be under 300,000 SA FTU claims it must be "scream it from the mountaintops" good to be under 200,000 SA FTU - if we used the seasonal factors from 2013 and 2014. It was shocking to see what happened to the hypothetical SA FTU numbers when I inserted this week's data. Shocking. Jaw dropping. So far, nothing in the news. This is a serious Apples to pomegranates comparison.

The Continuing Claims Data dropped 6.44%. Last week's data for the second week of November increased from 1.713 million to 1.723 million NSA CC. This should mean that the official U-3 number will increase from the level recorded during October. It should increase. Should. Maybe. The two surveys measure different things. The U-3 number records the number of people out of work looking for work. The continuing claims data measures the number of people who have recently lost a job with unemployment benefits who have been unable to find work. There may be people who have found work who were not receiving benefits because they were one of the long-term unemployed workers.

Continuing Claims Were recorded near a 29 year low, and lower than the same week of November 1970 and 1971. This column has written seriously countless numbers of articles regarding the situation that we have close to 90 million more workers now than we had during the 1960s and 1970s. This is a serious Apples to pomegranates comparison, again. Will this number fall below 1.5 million by the end of December? Will it continue to stay at these extremely low levels as season help is brought on-line for the Christmas Season? These people will not likely receive unemployment benefits.