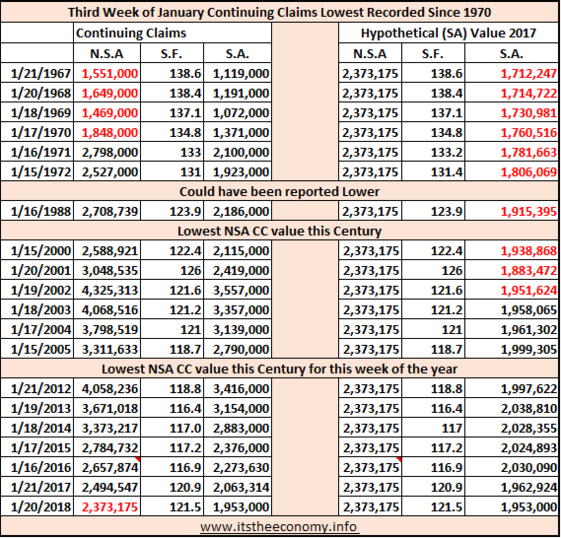 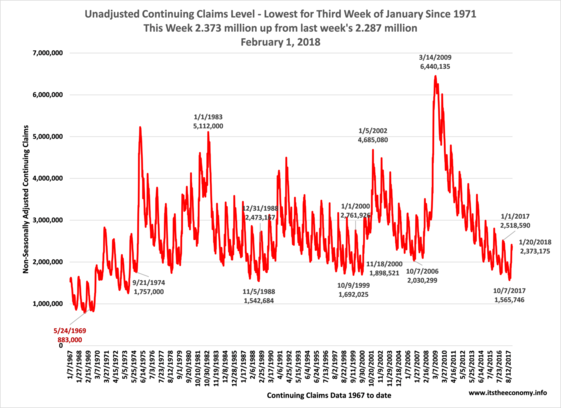 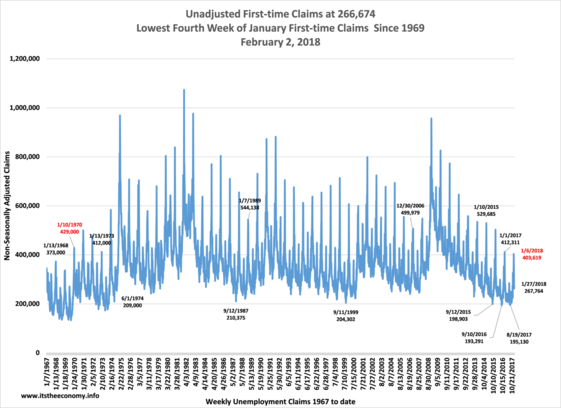 How Low Can Unemployment Claims Go?

The weekly unemployment claims report hardly receives a mention in the media these days. The headline number is the seasonally adjusted (SA) First-time Unemployment (FTU)  claims data. This number has been considered to show strength when it is under 300,000 claims a week. The second number that is of importance is the SA Continuing Claims(CC) data. These are the people who are unemployed and still receiving benefits. This week we received the first-time claims data for the fourth week of January and the continuing claims data for the third week of January. The seasonal factors that are used to convert the non-seasonally adjusted (NSA) data to the SA data change by category, week, month, season, and year. When data from different seasons are compared, or when seasonally adjusted data with different seasonal factors are compared, FACTs (False Assertions Considered to be True) are created. One of those FACTs is former President Obama's "Under 300,000 First-time Claims Streak." It was easier to massage the data than change the message.  Last week we received the lowest ever non-seasonally adjusted first-time claims data for the third week of January. Ever, So what happened this week? Normally we see first-time claims drop from January through September with occasional upticks in the non-seasonally adjusted data. This week is one of the weeks where we should have seen a down-tick of 15-25% in the First-time claims and a slightly lower (1%-2%) continuing claims data that this past week. Could we see another 6% drop as we did last year?

First-time Claims edged slightly higher to 267,764. The NSA FTU edged slightly higher, in part, because the data from the past two weeks were revised lower. The Seasonally Adjusted value for January 13th was revised down to 216,000. Is a number under 200,000 within sight? It is difficult to say because the Department of Labor does not publish the future seasonal factors.

Lowest unadjusted continuing claims for this week of January since 1971. Continuing Claims edged slightly higher from 1.940 Million to 1.953 million unadjusted claims.  The changes that happen can be impacted by how many week s there are in a month. This month we only have four reporting weeks. Some years there are five reporting periods during January. We saw the lowest NSA CC value and the Lowest SA CC value for the third week of January since 1971.

Continuing Claims could have been reported at 1.782 Million instead of 1.953 million claims.  The first-time claims feed into the continuing claims data. The continuing claims data lags the first-time claims data by one week. There are 2 million fewer people receiving continuing unemployment claims than the same week of January 2002. There are over 4 million fewer people receiving claims benefits than at the depth of the recession when 6.440 million people were collecting unemployment benefits. This is seriously good news. We could be reporting continuing claims at under 1.8 million. We could be reporting continuing claims at 1.712 million claims. If we are going t compare data to seasonal data - let's compare them to seasonal data from the same year. Remember that the lowest level of "covered insured" was 53 million workers during January 1971. We have over 140 million "covered insured" right now. We  have 425,000 fewer continuing claims than we had during 1971 and we have 87 million more potential claimants.

This report is the Rodney Dangerfield of Economic data - It gets no respect. The weekly claims data used to be bottom of the hour headline news. If we are lucky it gets a in column mention below the fold in the daily paper. Does anybody read the paper? Most readers are reading articles posted in their Twitter feeds or Facebook feeds. This data tells us which way the economy may be heading. Yesterday's ADP report revealed that there were upward revisions to their data for November and December. The annual growth rate for January 2018 was up from the annual rate during December 2017 and up from where it was during January of 2017. If the Employment situation report reveals a similar trend the Seasonally Adjusted Private Sector Worker number then tomorrow's headline "jobs" number should be north of 266,000 "jobs." It all depends on if there are similar upward revisions to the Current Employment Statistics data then the number could come in lower than 266,000. If 20,000 jobs are added to December's data that borrows 20,000 "jobs" from January.

The unemployment level, U-3 non-seasonally adjusted, should be the lowest during the past 20 or more years. It will increase from the December level. It is called January. Watch the unemployment number. Unemployed workers are participants. The Participation rate could improve if "enough" workers count themselves as unemployed. Tomorrow's participation rate, seasonally adjusted and non-seasonally adjusted, should be better than it was during January 2017. The January Participation rate last year would have been reported lower had they not downwardly revised the workforce population. Watch the revisions to the workforce population tomorrow.  This was a solid report. Talk about it. 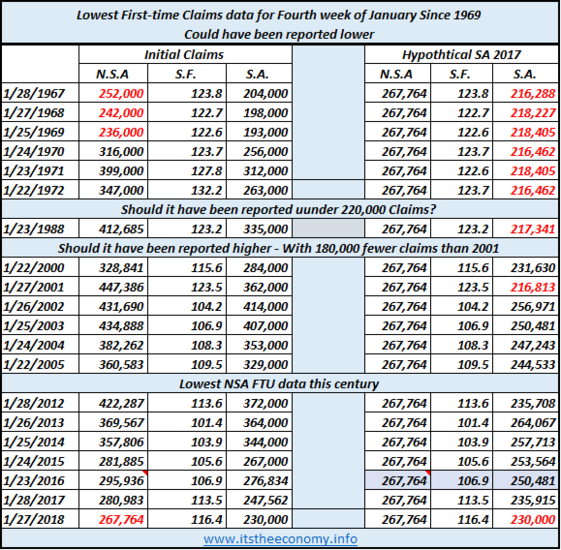