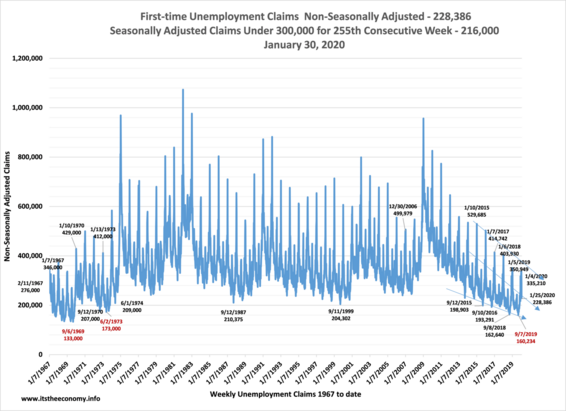 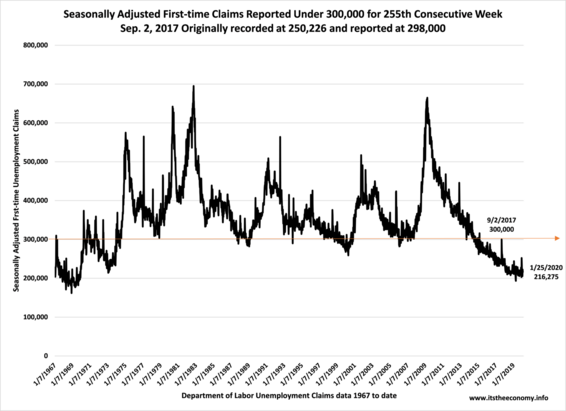 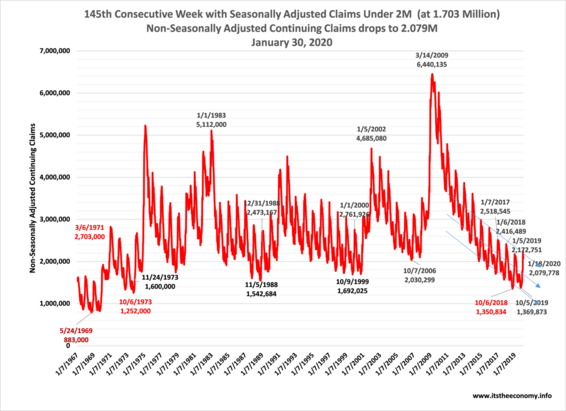 The weekly unemployment claims report used to be headline news at the bottom of the eight o'clock hour during the Obama Administration. Would the seasonally adjusted (SA) first-time claims (FTU) level drop below 500,000 or 400,000 or 300,000? They stopped mentioning the "streak" after the 2016 Presidential Election. They rarely acknowledge the continuing claims data. They have "never" commented on the Insured Unemployment Rate (IUR.) What was recorded this week? Nothing was reported because we had the GDP data released at the same moment, and we have Coronavirus in China. Here is the report. What does it mean?

Non-Seasonally Adjusted First-time Claims dropped to 228,088. This is the lowest that he Fourth Week of January NSA FTU claims has ver been, dating back to 1967. The first-time unemployment rate (FUR) was just 0.16%. This is the lowest issuance rate ever for the fourth week of January. last week's NSA FTU was revised higher from 267,582 to 282,088.

Seasonally Adjusted First-time Claims Streak hits 255th consecutive week. The SA FTU was reported at just 216,000. This is the lowest SA FTU for the fourth week of January since January 25, 1969. Same date. Fifty years later. The ata for September 2, 2017 was originally reported at 250,226 NSA FTU and 298,000 SA FTU. There was a massive revision tot he SA FTU data last year. The NSA FTU data for that date was not revised. The SA FTU was revised from 298,000 to 300,000. Did someone do that so that the SA FTU streak did not have to be referenced?

The Non-Seasonally Adjusted Continuing Claims (CC) value dropped to 2.079 million claims. This is important for a multiple number of reasons. The lowest that the NSA CC was from  October 7, 2006 to October 11, 2014 was 2.006 million. These are the people who have been collecting benefits for two or more weeks who are actively looking for work. Secondly, this is the lowest that the non-seasonally adjusted continuing clams level has been this low since January 15, 1970. Third, this is the lowest Insured unemployment rate for this week of January ever at just 1.43% non-seasonally adjusted.

The seasonally adjusted continuing claims level is under the 2.0 million mark for the 145th consecutive week. This is the lowest SA CC value since January 20, 1973 when it was 1.607 million. If we used the seasonal factors from the third week of January during the 1960s then the SA CC could have been reported at 1.501 million.

Will anybody mention that we are near historic lows for continuing claims this October when we have a record level of covered insured? Probably not. Couls we have another year with 20 or more weeks of non-seasonally adjusted first time claims being recorded under 200,000 claims, as we did during 2018 and 2019? Possibly. We have so many covered insured right now that this may be challenging.  Spread the new far and wide.