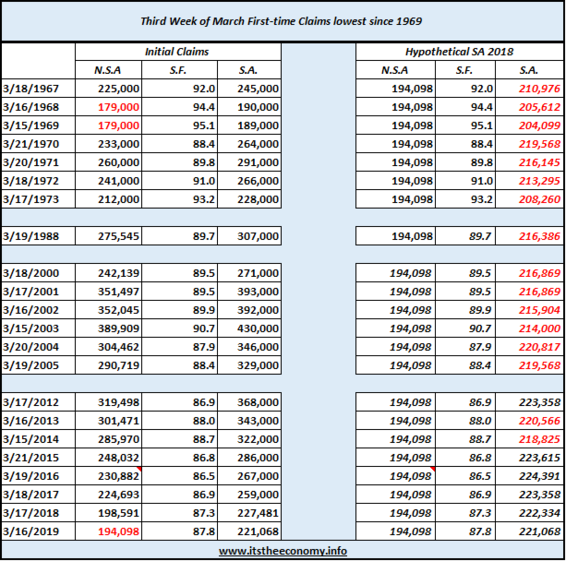 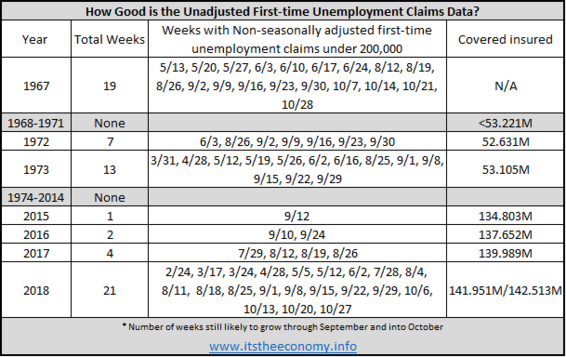 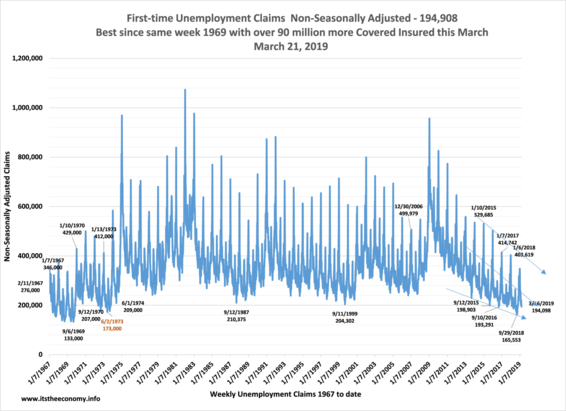 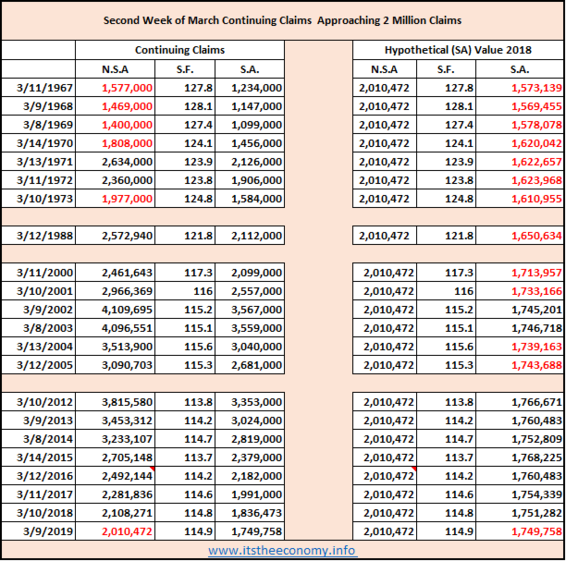 Supposedly the Economy is Slowing

You wouldn't know it by the Unemployment Claims Data

The mainstream media is proclaiming that the economy is slowing. Some in the media are pointing to a "weak" December Retail Report. It was our best December and our best retail sales year ever. Some point to a weak February Jobs Report. The non-seasonally adjusted CES worker data was better than February 2014, 2015, and 2016 and reported worse than all three. The Mainstream Media MAGA Recession is Misplaced. The first place that we could see weakness is in the weekly claims data. What was recorded and what was reported this week?

Non-Seasonally Adjusted First Time Claims Recorded at 194,098. The Fist-time Unemployment (FTU) claims chart shows that there is a peak in claims during the beginning of January, a second min-peak during July, and a "bottom" that normally happens during the final week of September. This is one of the earliest weeks of the year where the NSA FTU claims were recorded under 200,000. Last year we had the earliest week with an NSA FTU value under 200,000 claims when it happened February24, 2018.

First-time Claims were reported at 221,000 claims. This, too, is a low for this week of the year. The last time the SA FTU was this low was March 15, 1969.  If we used the same seasonal factor this week as we did during 1969 then the SA FTU would have been reported at 204,000 claims. The SA FTU streak supposedly started March 7, 2015. This FACT (False Assertion Considered to be True) is one of the economic urban legends that was perpetuated by the former Obama Administration.  When we hit 199,000 SA FTU claims during the week of January 19, 2019 there was nary a word in the mainstream media.

Continuing Claims data recorded a drop of 3.74% to 2.010 million claims. The thought was that we could see a drop of 2% to 4% this week.There were 98,000 fewer continuing claims this week compared to the same week last year. We have 2 million more covered insured this year compared to last year.

The Seasonally Adjusted Continuing Claims Streak is Approaching 100 consecutive weeks. Seasonally adjusted (SA) continuing claims (CC) were reported at 1.749 million claims. The SA CC value has been under 2 million since April 22, 2017. Next month it will be two full years under 2 million SA CC. So far, there has been very little mentioned in the MSM.

The Insured unemployment rate  dropped to 1.41%.  We have moved from the often covered, to the rarely covered, to the "why isn't this covered?" The first-time claims data used to be covered at 8:30 AM eastern Time, on the day that it was released. It is sometimes mentioned in the chyron, or crawler, at the bottom of the television screen. The continuing claims data gives an idea of the difficultty of finding a job.  The insured unemployment rate (IUR) is the percentage of the covered insured, currently 143,051,794 workers, who are receiving continuing claims.

Normally an Insured Unemployment Rate (IUR) under 2.00% would be great, remarkable, news. We have been under 2.00% since January of 2016. We dropped below 1.5% during 2015 before rising at the beginning of 2016. This cycle of peaks and valleys has continued through this year.  Last year the lowest ever NSA IUR was recorded when it hit 0.95%. The trend is for the continuing claims level to continue declining until it drops below  the 1.35 million NSA CC value recorded last October.  Could it drop to 1.25 million claims?  If it drops this low then the IUR could be reported between 0.85% and 0.87%. It is likely that the covered insured number will be revised higher within the next 6 months.  The current 1.41% IUR is lower than it was during October of 2000, the low point of that year.

The weekly claims data  is the first indicator of any weakness in the economy. We receive the data five days after the data is collected. We receive this data every week of the year. The thing to remember is that the continuing claims data is different from the U-3 unemployment data that is obtained through the Current Population Survey (CPS) data that is a part of the monthly jobs report. This data is collected once a month around the 12th of the month.  The CPS data measures full-time jobs, part-time jobs, unemployed workers, and includes in the workforce population estimate. This is different from the Current Employment Statistics (CES) worker and wage data. The CES data is comparable to, not identical to, the JOLTS (Job Opening and Labor Turnover Survey) data regarding job openings, hiring, quits, and separations data.

What does this all mean? We have fewer continuing claims this yer than we had last year at the same point during the month of March. We could see a drop in the U-3 unemployment data. We could also see an increase in the U-3 number as more "non-participants" re-enter the workforce and start looking for jobs. The U-3 data measures unemployed workers, workers looking for jobs, while the continuing claims data measures the number of workers who had jobs, lost jobs, and want another job. We know from the January JOLTS data that there are job openings in four sectors where three of the four sectors are the lowest paying sectors with the most job openings, the most quits, the most separations, and the most hiring.

The economy is still Growing in the United States. We know that he number of workers, non-seasonally adjusted, grew at an annual rate of 1.93% (NSA) during February. We know that the NSA Wage growth was at 3.44%. This means that our earning power, wages time workers, grew at 5.11%. We are not spending all that we earn, it just seems that way. As long as the number of workers grow from the level recorded the same month during the prior year, and wages do the same, our earning power will grow and our economy will grow. f our economy continues to grow then employers will be encouraged to pay more for workers then wages will rise and more workers may be lured back into the workforce. If we spend more in the retail environment then those employers will hire more workers. We are in a Virtuous cycle.non-farm payroll workers or 25,000 SA CES private sector workers?

This is a piece of good news that needs to be reported elsewhere. The media focuses on the seasonally adjusted data because it is the easiest to understand. Would you have believed that we added 1.2 million non-seasonally adjusted jobs during February had that been the headline? Why did the mainstream  believe that we only added 20,000 SA CES non-farm payroll workers or 225,000 private sector workers during February?  Why did the mainstream media believe that retail sales dropped from November to December? If it doesn't seem right to you, do as I do, dig into the data. 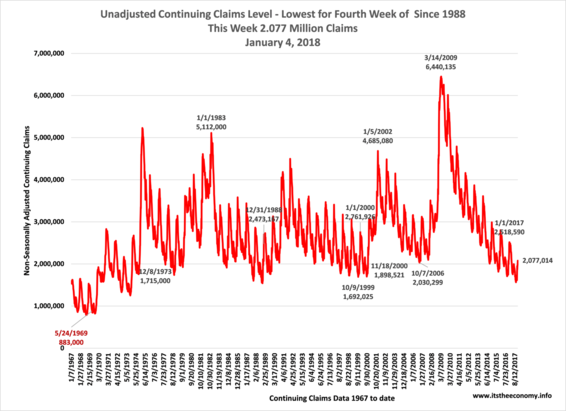