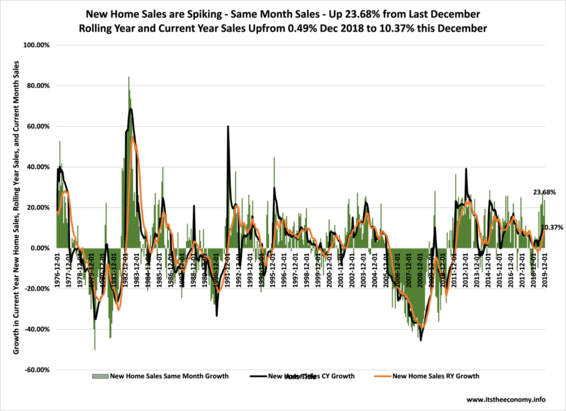 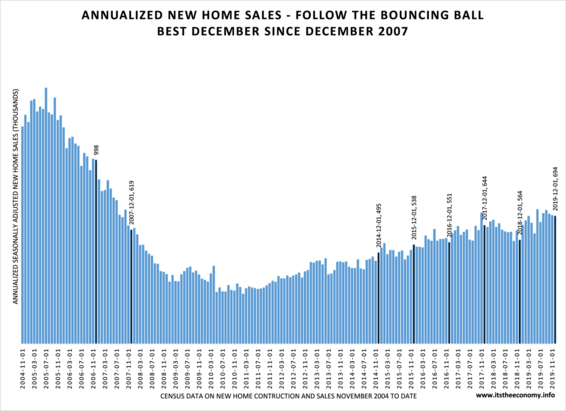 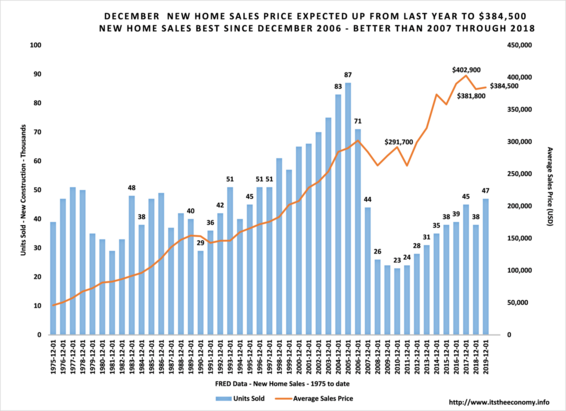 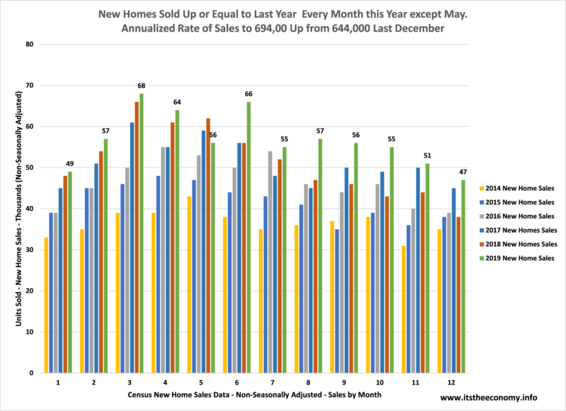 The December New Construction data caught some people off-guard last week with Starts and Completions Surging. The article "New Construction Ends the Year Spiking" detailed how strong the Starts data was on a monthly basis, how starts exceed the 2018 level after a Schumer Shutdown slow start, and how completions continued their torrid pace. The real estate forecast article projected some of this and strong New Home Sales data.  It was thought that we could see 45,000 to 55,000 new homes sold during December, better than December 2007 through 2018, and that a record average sales price for the month of December could be set, coming in around $403,000 to $405,000. What was recorded and what was reported?

The Seasonally Adjusted Annualized sales were reported at 636,000. Last December the Annualized rate of sales was reported at 621,000 and have been revised to 564,000, This means that the SAAS is up 23%. This also means that the data last year was really off the mark. We were in the shutdown. If you look at the SAAS data you will see that this is the higher st level since December 2006 when we were over 998,000 units. It is higher than December 2007 when we had 617,000 units.

We beat last year's monthly sale level for the eleventh month this year. Month to month variation is fairly consistent. We normally have a new construction peak during March, April, or May. The month by month data tells a good part of the story.  We had almost as many sales this month as we did during January. There was a remarkable spike from December to January between 2018 and 2019. If we spike as we did last January, this January, then we could see a number close to 60,000 units for January.

Inventory rose from last month's level and fell from last December's level. We have 331,000 units in inventory, up from 325,000 last month and down from 348,000 units last December. The inventory level has not been growing as much as the under construction data would indicate because the sales are up so dramatically over last year's levels.

This data was remarkable. It got lost in the discussions of John Bolton, Impeachment, Coronovirus, and a stock market correction day. New home sales should bolster retail sales as people purchase new furniture and furnishings for their new homes, They may purchase Building Materials and Garden Equipment. They may even buy new electronics and appliances for their new homes. All of this is good for retail sales. All of this is good for future employment opportunities.

All of the data is pointing toward continuing improvement in the economy. Sales tend to dip from November to December, non-seasonally adjusted. This means that the SAAS also tends to dip a little from March through December and rise from December through March. Last year we eclipsed the 700,000 units level during June, August, September and October. This was achieved once during 2017 when we hit 711,000 units during November.  You have to look back to November 2007 to report a number over 700,000 for the SAAS when it was 778,000 units. Our peak was 729,000 during June. Will we break through 800,000 units SAAS this year? Time will tell. Will the significance be reported? Time will tell.