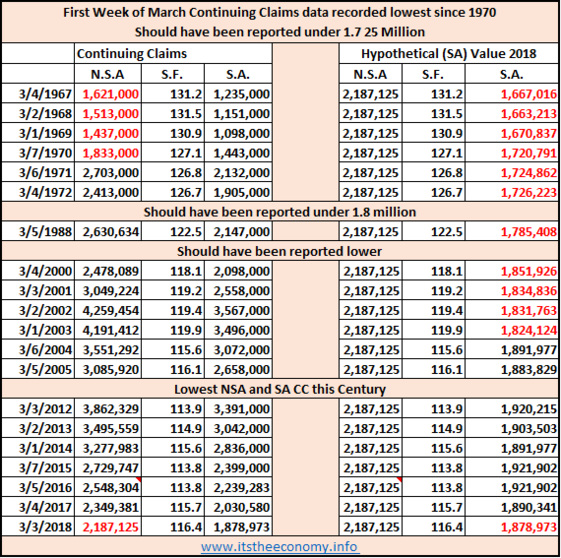 Last week we saw a slight uptick in the non-seasonally adjusted (NSA) first-time unemployment (FTU) claims data, as well as a slight uptick in the seasonally adjusted (SA) FTU claims data. This was anticipated. There are normal cycles for the unemployment claims data. Last week we received information that the both the NSA Continuing Claims (CC) and the SA CC data declined.Last week this column published an article on the data titled "Remarkable First-time Unemployment Claims Data" that detailed how we had seen NSA FTU claims record lows for the first, second, third, and fourth weeks of February. We saw the lowest ever NSA FTU claims data for the first week of February,  the data for the second week of February was the lowest for that week of the month, etc.  We are in uncharted territory. We have gotten to this point in time due to many factors. Workforce participation plumetted under President Obama. WE saw an explosion of part-time jobs under President Obama. Part-time workers do no receive unemployment benefits. We have seen record levels of Multiple Job Holders. When these workers lose one of their jobs they still have another job. There is no Lesser Employment Insurance program, other than having a back-up job.  It was projected that this  week we could see a 5-9% drop in the  NSA FTU claims data and a 2-4% drop in the NSA CC data.  What happened?

Non-seasonally adjusted First-time Unemployment Claims dropped 9.27%. The data that was published this morning showed that last week's NSA FTU value was revised slightly lower from 226,40 claims to 22,513 claims. This week the NSA FTU value dropped to 204,591. This may not seem like much of a drop, roughly 11,000 claims, except the lower the NSA FTU number gets the harder it is to reduce the level. Remember that we have 141 million covered insured, right now, compared to the 53 million during 1971.

The Headline Number Could have been reported at 200,000 claims. If we are going to compare the SA FTU data with prior data then we need to compare the data using the same seasonal factors, or at least the SA FTU of the same week of the year.  The Obama Administration was promoting a "Under 300,000 SA FTU Claims Streak." This is one of the many economic urban legends.  The streak did not begin when they said it did, and it ended multiple times.  When they said that it the data for the current week was the lowest since _____ it was a FACT (False Assertion Considered to be True.) They would compare seasonally adjusted data from January with seasonally adjusted data from July.  This is like comparing snow with rain.The NSA and the SA data from the second week of March 1971 were both lower than the data for the second week of March this year. That is the only data for this week of the year during the past 51 years that were better than this week's data.

Non-seasonally Adjusted Continuing Unemployment Claims dropped  2.04%. The data from last week was revised slightly higher, from 2,227,076 to 2,232,576 claims. This week that data was recorded at 2,187,125. How low can this value drop? Last year we hit 1.54 million during the first week of October. This was comparable to the best data since November 5, 1988 and lower than September 21, 1974. Peak NSA CC claims this year was 2.416 million, down from 2.518 million during the first week of January. Could we see a drop to 1.45 Million or lower this October?  We will need to watch this value next week. The data collected next week will be the value closest to the collection date for the March jobs report.  A level of 1.4 Million as a low this year would follow the trend line created from the past four lows. Could January come in at 2.2 million to 2.3 million? The last four peaks point in that direction.

The seasonally adjusted continuing claims data could have been reported under 1.7 million claims.  We have seen lower NSA CC data for this week of the year during March 1967, 1968, 1969 and 1970. Again, roughly 90 million fewer claimants during those years than this year. The trend is our friend. The February Jobs report was exceptionally strong.Does this matter to most people? It should. It "talks" about the ease or difficulty of finding a job.

The weekly unemployment claims data gives us the most up to date economic data that we receive on a regular basis.Fewer people are filing for unemployment, either because they are finding jobs before they leave their current job, or people are trading part-time jobs for full-time jobs, or people are trading multiple jobs for one job. Multiple Jobs workers were reported higher in the February jobs report. More information on this situation will follow this article. More multiple job holders mean more people who will not be claiming unemployment benefits when they drop one of their multiple jobs. The weekly claims data also gives a sense of the direction for the U-3 unemployment claims. This was a seriously good weekly claims report. It was remarkable. It was "unbelievably good." It was unloved. 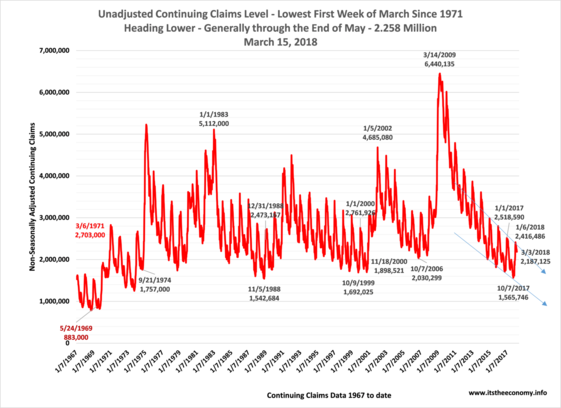 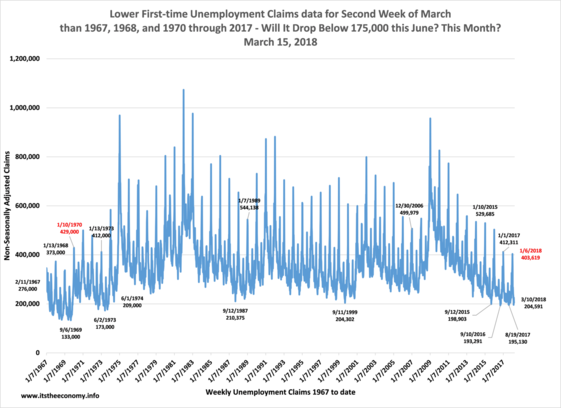 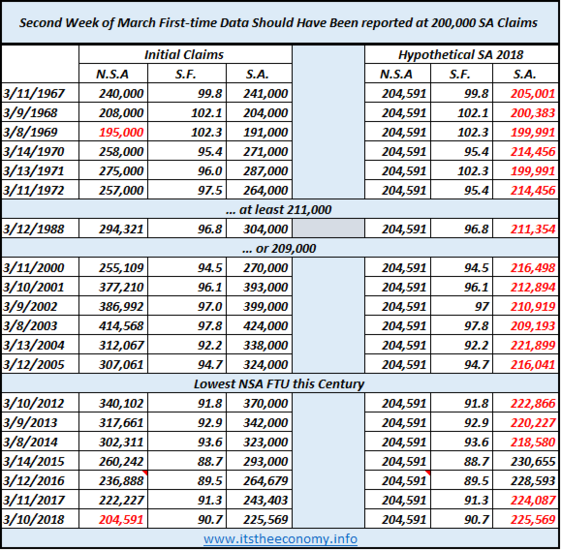