The July Jobs Report was either a disappointment or a Goldilocks report.

The July Jobs Report Forecast article projected to see growth in all sectors except Government and Education and Health Services. This was recorded. The revisions to the May and June data trimmed the Non-farm Payroll number and the Private Sector data. We saw unemployment drop, full-time jobs jump, and multiple job workers jump, as well. This was reported in the "July Jobs Report: Better than July 2017" article. What was reported was that the Wage data did not show as much strength as expected. They are reporting on the data in the report, the seasonally adjusted wage data. The average wage needs to be measured by worker growth and weekly wage growth. We have to examine the sector data.

Average Weekly Wages were up for all Sectors as compared with July 2017. There were some revisions to the June data that lost their month to month gains that were recorded last month. Total weekly wages are up almost 5%. This bodes well for the Monthly Retail Sales Report. Only IT saw a decline in year to year workers.

We have seen a pattern of high job opening and high quit rates for the lowest paid sectors. We will probably see a similar situation when the June JOLTS data is released. Wages were up more for Leisure and Hospitality than the overall average. Maybe there will be better retention. We will find out next month when the July JOLTS Job Openings report is released 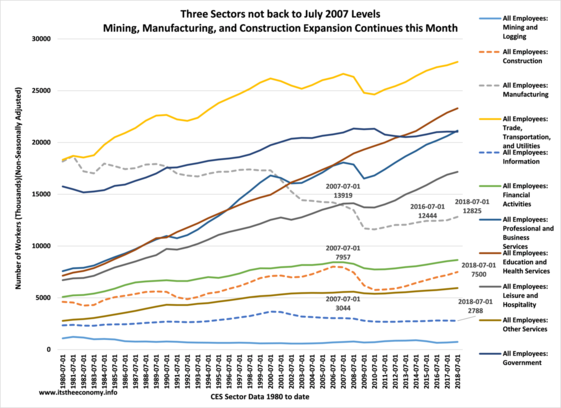