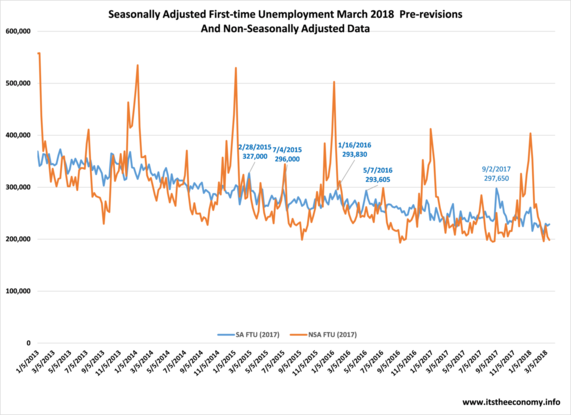 How Will the Unemployment Data be Massaged and Messaged?

The Weekly Unemployment claims data used to be headline news at the bottom of the hour when the reports were released on Thursday Mornings at 8:30 Am. They still release the data on Thursday - they are no longer actively promoted. There are two main numbers that are recorded, the non-seasonally adjusted (NSA) first-time unemployment claims (FTU) data and the NSA Continuing claims (CC) data. What is reported is the seasonally adjusted (SA) FTU and CC data. The seasonal factors used to convert the NSA dat to the SA data change week to week, month to month, and year to year. When seasonally adjusted data is compared with seasonally adjusted data from different seasons, years, or decades, false assertions considered to be true (FACTs) are created. The under 300,000 SA FTU claims streak is one such FACT and has been covered a number of times, most recently in the "Economic Urban Legends" article. Last week it was announced that there were going to be revisions to the SA and NSA data from 2013 through 2017.

The last time that the SA FTU value was over 300,000 was February 28, 2015. It has been over 1100 days or over 160 weeks since the streak began. The problem is that the seasonal factors were manipulated to maintain the streak. You can see that Hurricane Harvey almost ended the streak this past September.  You can also see that we are approaching the lowest level of first-time claims since January 2013, a bottom that is not normally reached until the final week of September.

How will the data be massaged? How Will the data be messaged? It will be very interesting if the record low data for the four weeks of February 2018are revised higher at some point in time. Will some of the data from 2015 or 2016, where the NSA FTU data generated a SA value that just fell short of 300,000 will accidentally be revised higher and end the streak?

The unemployment claims data often has an advance value, a preliminary value, and a final value, as do most data sets. The problem is that the data is revised after the final revisions are posted. We saw similar revisions to the NSA and SA CES data with the release of the January Jobs Report this February. If people are not paying attention to the data revisions then the message can be perpetuated whether it is FACTual or not. 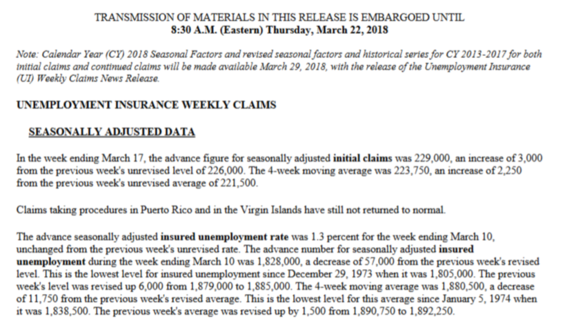