The weekly unemployment claims report used to garner bottom of the hour headline status as the seasonally adjusted claims level dropped from 500,000 to 400,000 to 300,000. The discussion shifted to the number of consecutive weeks under 300,000 SA FTU. Fifty. Sixty. Seventy. Eighty. Ninety. Presidential election. Crickets.

The First-time Unemployment Rate was just 0.15%. This is the same as it was last year during the final week of November. It is tied for the lowest with what it has ever been during this week of the year.

The headline seasonally adjusted first-time claims data was reported at 203,000 claims.  This would have been quite a story if it had dropped below 200,000 claims. This was within expectations. This was the lowest SA FTU for this week of November since November 29, 1969.

Continuing Claims recorded a drop from 1.545M to 1.503M claims. Continuing claims tend to rise from the first week of October through the first week of January. This is the fewest continuing claims during the fourth week of November since November 22, 1969. We are even lower this year than last year during the fourth week of November. We have been trending a little higher than last year, using same week data, during the past few weeks. Part of this is due to have 2.1 million more covered insured this year than we had last year.

The Seasonally Adjusted Continuing Claims data was reported under 2 million for the 137th consecutive week.  Somehow the SA Continuing claims data rose from 1.642M to 1.693M claims.Crickets in the media because there are crickets in the report. The seasonally adjusted data could have been reported lower than it was. This streak started April 1, 2017.

The Insured Unemployment Rate (IUR) was recorded at 1.04%.  This is just significantly lower than the 1.17% during the same week of the year last year.  This data receives "no coverage" in the media. This will most likely be the first thing that indicates a change in the economy. Others will claim that rising first-time claims will indicate a change - the change is in the number of workers in the economy.

The best form of unemployment insurance is a second job. We are at the second highest level of multiple job holders (MJH) during the month of October. We normally hit "peak MJH" during November or December. The November Jobs Report is expected to report a spike in Multiple Job Holders (MJH) with probable record for total MJH and for dual PT job workers. Even if the MJH workers lose a Full-time Job, most likely a seasonal FT job, they still should have one job. We may see our smallest spike in first-time claims and continuing claims this January. It is an election year. Campaign staffs will be expanding. Advertising staffs will be expanding. Ignore the weekly claims data at your own peril. 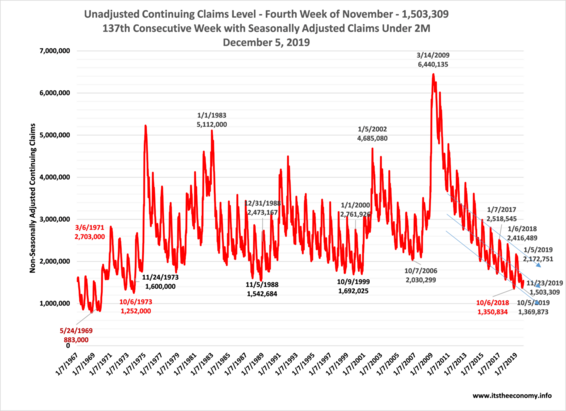 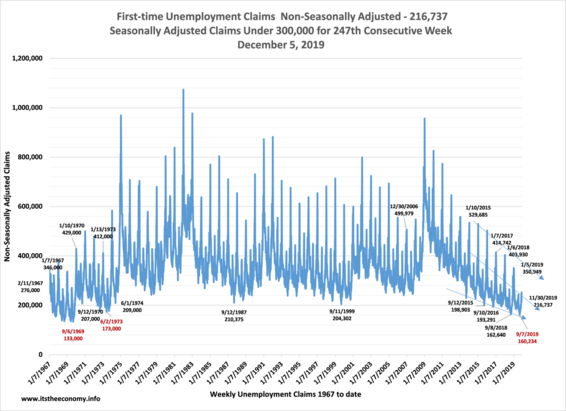 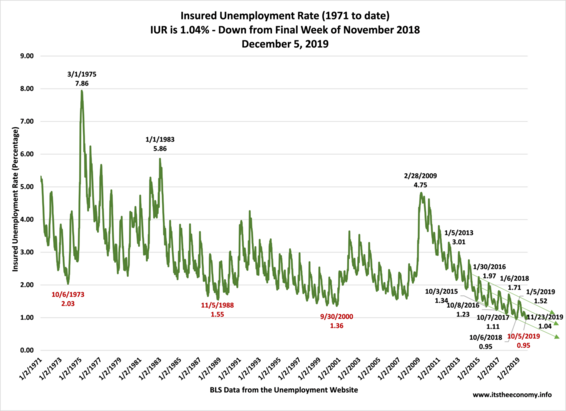