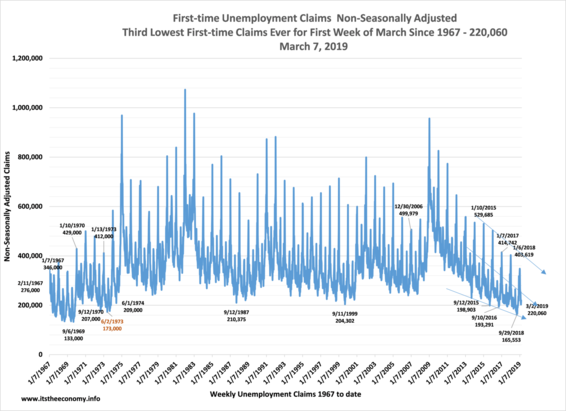 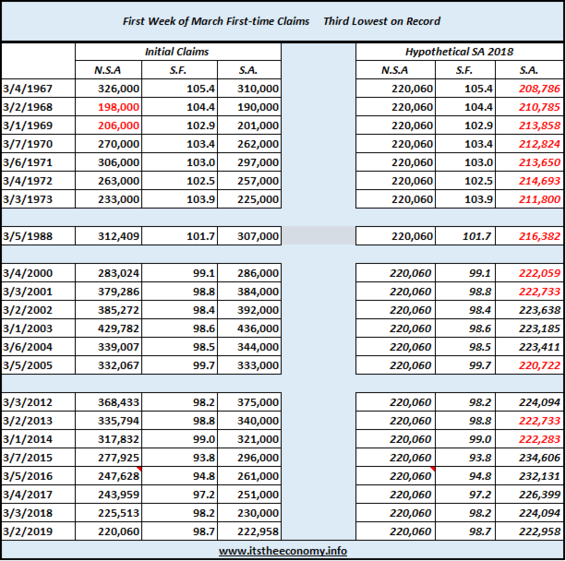 The Continuing Claims (CC) data paints a similar picture. The NSA CC value edged lower from 2,126,178 to 2,109,742 claims. The continuing claims data tends to drop by 3% to 11% during the final week of February. The day of the month matters. This year we saw the data drop 3.8%. We are getting to levels of continuing claims that we normally do not see during this time of year. This was the lowest recorded for the fourth week of February since February 1973.

The Insured Unemployment Rate (IUR) dropped to 1.47%. This IUR is the percentage of the "covered insured" workers who are receiving continuing claims. This is not to be confused with the official U-3 Unemployment rate. The unemployment rate is those people out of work looking for work. The IUR measure the workers who were employed who are looking for work. Big Difference. If you examine the data then you will find that the rate during the fourth week of February 2015 was 2.16, then during 2016 it was 1.91%, and 1.76% during 2017, and 1.58% during 2018. Will we drop below the record set last year of 0.95%?

Apples, Pears, Pomegranates. The number of unemployed workers comes from the Current Population Survey (CPS) data set. This is often compared with the JOLTS job opening data. That is a different data set that measures something entirely different. The JOLTS data is comparable to the Current Employment Statistics Data set, a third data set measuring comparable information with a different sample size and a different margin of error. The CES data is the worker data. This data can be reported as the non-farm payroll data or the private sector worker data. The Private Sector data is comparable to the ADP data, the NFP data is not comparable because it includes government workers. It sounds good to compare job openings with unemployed workers. Why not just compare the Job Openings data with Continuing Claims data?

Sooner or later the media will start covering this data again. Until then, remember, it's the economy.