The weekly unemployment claims report used to garner headlines at the bottom of the 8:00 A.M. hour most Thursdays from 2008 through 2015. There were discussions of First-time Unemployment Claims streaks, then those talks became whispers before they became a deafening silence. The Obama Administration First-time Unemployment claims was a FACT, a False Assertion Considered to be True. It was and Economic Urban Legend. The truth is that we have had year over year declines in same week first-time claims data since January of 2009. There have been some variations depending on which months have five weeks of data and which months have four weeks of data. What has been ignored, as a result of most analysts, and most in the media, focusing on the seasonally adjusted (SA) data  is that we have had exceptionally, remarkably, amazing non-seasonally adjusted (NSA) data. We have had 17 weeks with the NSA First-time Unemployment (FTU) claims data under 200,000 claims, with a "2." The "Unemployment Claims Streak" was/is the number of weeks with SA FTU claims under 300,000, with a "3." It was projected that even though the NSA FTU claims should have risen 7% to 15% (176k-190k) that the SA FTU could have been reported between 189k and 204k.

Ignore Continuing Claims at your own risk. Another item that has been ignored is the Continuing Claims (CC) data. The FTU data feeds into the CC data. Normally we see a low for NSA FTU claims during the final week of September and a annual low for the NSA CC during the first week of October. A "good" value is when we are under 2.0 million NSA CC. WE dropped to 1.40 million NSA CC last week. The NSA CC was lower this week with 141.9 million covered insured, than it was at the end of September 1973, when the covered insured was only 60.8 million workers.  The continuing claims data was projected to fall up to 5%, from 1.33 million to 1.40 million NSA CC. The SA CC was anticipated to fall between 1.604 Million and 1.689M.

First Time Claims recorded a jump to 199,166.  This was slightly higher than projected. This bump is an annual trend. Normally the NSA FTU starts to climb after the final week of September.  We almost touched the bottom tine of the pitchfork last week. This is the 18th time this year that the NSA FTU was under 200,000. The only year with more weeks under 200,000 claims was 1967 when the program started when we had 90 million fewer covered insured.This was the fewest for this week of the year since 1969.

First-time claims could have been reported under 210,000. The SA FTU was reported at 214,000. The data could have also been been reported significantly higher. This is a seriously good SA FTU number for this time of year.

Continuing Claims recorded a drop to 1.376 million claims. This is 206,000 claims lower than where we were the same week of September last year, remembering that the CC data trails the FTU data by one week. The column has been speculating just how low the NSA CC value could fall by the first week of October. Will it drop below 1.3 million next week and challenge the level of October 6, 1973? There should be at least one more week of declining NSA CC data this year.

The Insured Unemployment Rate (IUR) dropped to 0.97%. The IUR had never been below 1% until this year. Officially it is still 1.0%. They round the data to the tenth of a percentage point and rounded up the data. It was not referenced in the report and the report had a graphic that showed the data higher than what was recorded or reported in the report data.

Hurricane Insurance for Employees. This news will be buried by coverage Hurricane Michael and yesterday's stock market drop. What needs to be remembered is that there is a special program for those in Federal Disaster Areas. There is an unemployment claims program for those who become unemployed due to a hurricane, the Disaster Unemployment Assistance Program. This is from their website. (emphasis added:)

Contact your friends in Florida and North Carolina. Contact your favorite media personalities. Retweet this article so that they start discussing this program. Nobody wants to see unemployment claims data spike artificially. Nobody should want to see people eligible for benefits not receiving them because they do not know that the benefits exist. 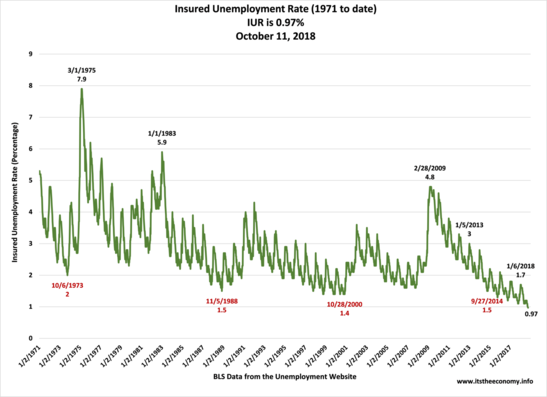 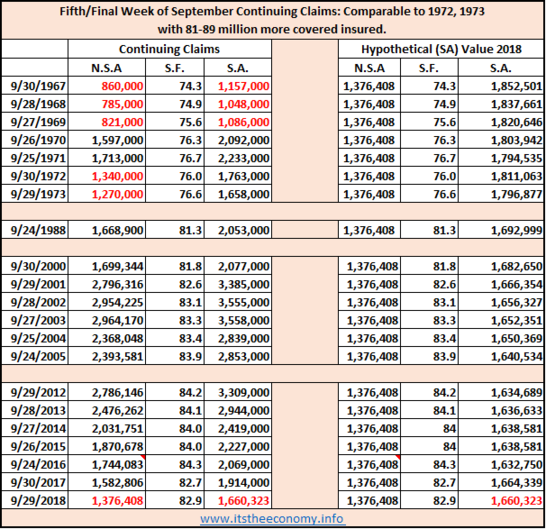 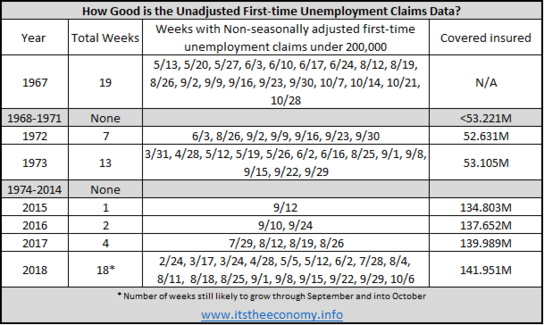 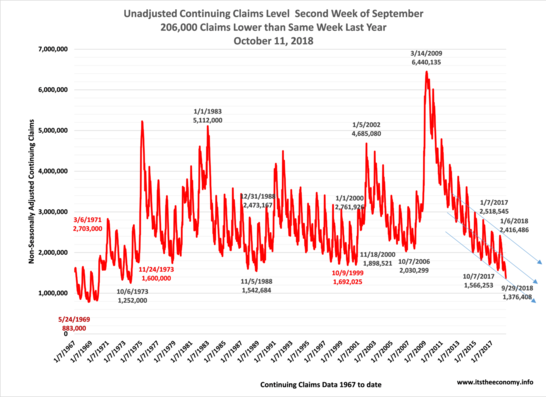 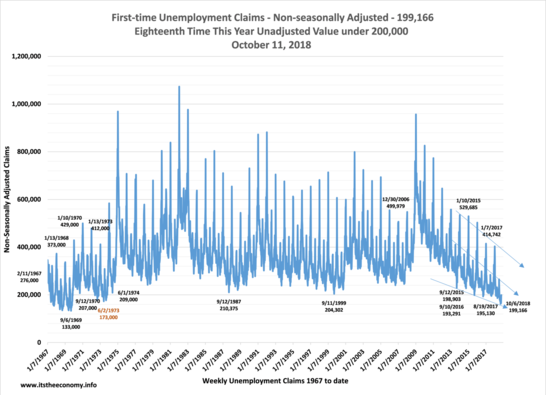 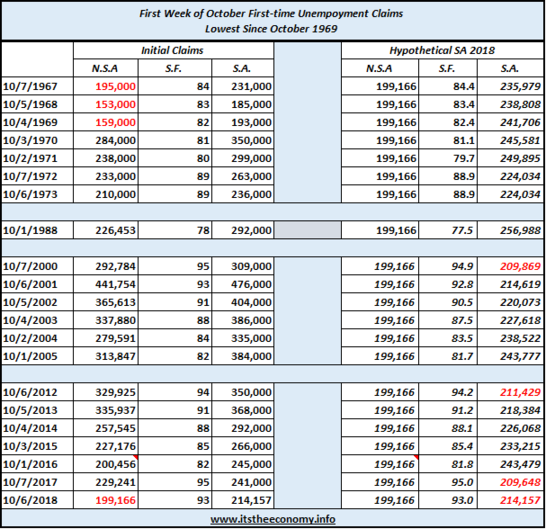