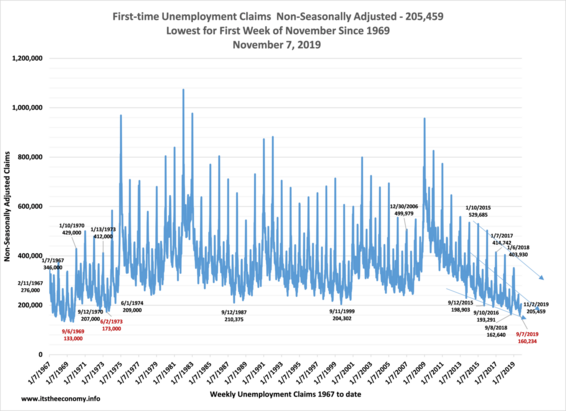 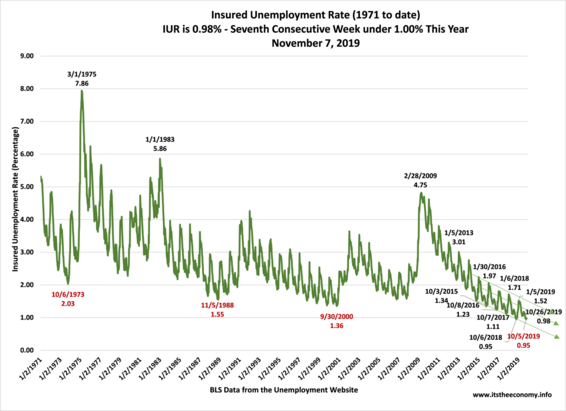 Last Week we had our 23rd Week of Fewer than 200,000 First-time Claims this Year

Last week we had our record setting 23rd week this year with fewer than 200,000 non-seasonally adjusted (NSA) first-time claims (FTU.) The media used to fawn all over the data, every Thursday at 8:30 AM Eastern when the seasonally adjusted (SA) FTU was under 300,000 claims. The SA FTU has been below 250,000 claims since October 7, 2017. Collective Yawns in the Media. We even had two weeks this year with the SA FTU under 200,000 claims. Then there are the Continuing Claims data and the Insured Unemployment Rate data. What was recorded and what was "reported" this week?

First-time Claims rose less than expected. Hit 205,459. NSA First-time claims normally rise from Mid-September through the first week of January. It was projected that the NSA FTU would rise 2% to 6% this week and be recorded between 207,000 and 216,000 NSA FTU Claims. This was better than projected. The number of weeks with NSA FTU under 200,000 appears to be stuck at 23 weeks this year. That was a record.

Seasonally Adjusted First-time Claims fell to 211,000 Claims. Up is down in this seasonally adjusted world. last week the NSA FTU was 198,719 (revised) and 219,000 SA FTU (revised.) If we used the seasonal factors from prior years the SA FTU could have been reported under 200,000 claims.

Continuing Claims edged very slightly higher to 1.420 million. Last week the NSA CC was 1.419 million claims. NSA CC levels tend to rise from mid-October through the second week of January. This is normal. There may be some in the media proclaiming that the end is near because we have 28,000 more continuing claims this October than we had during the fourth week of October last year. They are the same people that ignore the situation that we have 2.1 million more covered insured this year compared to last year.

The Insured Unemployment Rate (IUR) was recorded under 1.00% for the seventh consecutive week. This is a record. We had never had one week under 1.00% until 2018. The lowest we achieved during 2017 was 1.11%. Last week we had six weeks under 1.00%. This was not reported elsewhere. It probably is not being reported elsewhere today.

The best form of unemployment insurance is a second job. We are at the second highest level of multiple job holders (MJH) during the month of October. We normally hit "peak MJH" during November or December. Even if the MJH workers lose a Full-time Job, most likely a seasonal FT job, they still should have one job. We h=may see our smallest spike this January. It is an election year. Campaign staffs will be expanding. Advertising staffs will be expanding. Ignore the weekly claims data at your own peril. 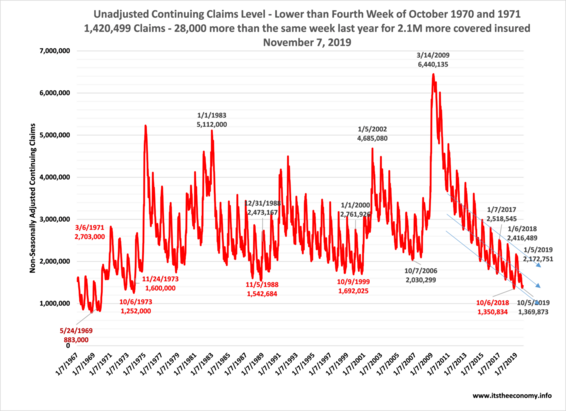