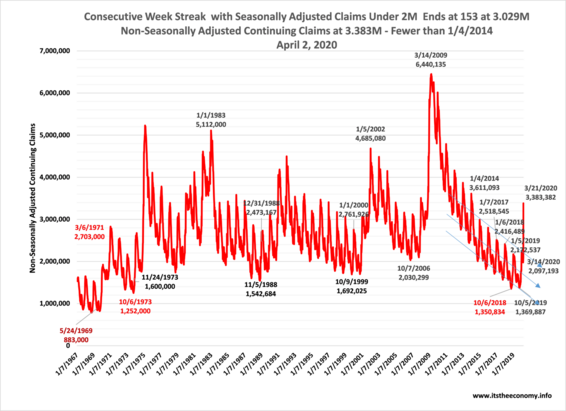 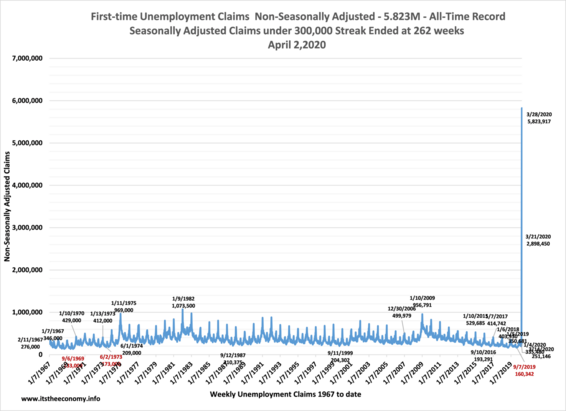 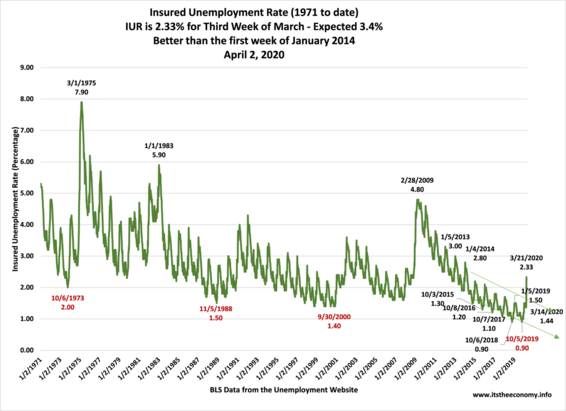 Weekly Claims Spiked More than Ever hitting 5.823 M this Week

We are in the Coronavirus Era (CE) of Economic data

The weekly unemployment claims data fell out of favor with the media under the Trump Administration. The benchmark of being under 300,000 claims, seasonally adjusted, was passe. Last year we had 23 weeks where the non-seasonally adjusted data was recorded under 200,000 claims. We also had a tie for the lowest ever Insured Unemployment Rate (the number of continuing claims divided by the number of covered insured) at just 0.95%. That all changed this year with the Governments around the country shutting down business and schools in an attempt to prevent he spread of the COVID-19, or Wuhan Flu, coronavirus from spreading. What happened this week,the fourth week of March for first-time unemployment (FTU) claims? What happened with regard to the continuing claims level for the third week of March?

We reported our worst week ever for first-time claims. The seasonally adjusted FTU was reported at 3.307 claims for last week. We spiked to 6.648 million SA FTU this week. The seasonal factors used to convert the NSA FTU data that is recorded to the SA FTU that is reported change week to week, month to month, and year to year. Did we have 8.8 million NSA FTU or 9.9 million SA FTU during the past two weeks? Yes.

What is the point of discussing all of the details of the report? The covered insured level was at its highest level ever, prior to the shutdown of the economy. We had the most people working. If we look at the IUR, it may be a week or two, or never, that we approach the level recorded during March of 1975 (7.90%.) I am old enough to have been alive during March of 1975. I am old enough to remember the gasoline lines and the even-odd fill-up dates. I do not remember it being that bad back then. This was a government created shutdown. There will be a government created re-start.

The first-time claims are truly historic. The continuing claims level is getting back to where we were during 2009. The IUR is not close to being the worst ever. Some in the media are hyping 40% unemployment and a 24% drop in GDP during second quarter. The first quarter just ended March 31st. The second quarter just started yesterday. Keep Calm. The Legacy Media is trying to send the world into a Depression. The data is going to be squirrelly CE. Soon we will be AD, after Disruption. If we survived 2013 and 2014, if we survived H1N1 during 2009-10, then we will survive this.