The The We Should Be Thankful for Low Unemployment Claims Levels, Plural

The "Mother of all FACTs" was the jobs creation streak. This column has written numerous articles regarding the "Jobs Streak." First of all, you have to be clear as to whether or not you are talking about the Non-farm payroll streak or the Private Sector Worker Streak.

The "Aunt of all FACTs" was the First-time Unemployment Claims Streak. The SA FTU streak is the sister of the mother of all streaks. Shortly after the White House started touting the "Jobs Streak" they decided to start promoting the consecutive weeks streak of SA FTU Claims under 300,000. This column, and its sister site,  wrote a number of articles regarding the manipulation of the FACTs with seasonal factors. The published seasonal factors would be revised after being published. If a similar treatment to the data is done with the seasonally adjusted data is done with the FTU claims data as was done in the articles regarding the seasonal factors and the Private Sector Worker data it is found that the SA FTU Streak "never" really started, it "ended" frequently, and when the wholesale revision of the data was done a year ago it ended during November of 2015 and November 2016.

Streaks are good. Streaks instill confidence in the economy. The problem is that seasonally adjusted data is intentionally misleading. We will see a drop in jobs and workers after the first of the year after the Christmas help is released. We may see an increase in the number of first-time claims, or we may not, as some of these jobs will be seasonal or part-time jobs which receive n unemployment claims benefits.  Enough of this nostalgia, what happened this week?

First-time Claims were recorded an uptick to 277,400 claims. This is not a shock. We tend to see a spike this month after the lows of October, as the articles regarding the end of the SA FTU streaks happening each of the past two Novembers detailed. The good news is that the under 300,000 streak is still alive.

First-time Claims could have been reported lower - at 233,000. While we have to go back to the 1960s to find a lower NSA FTU value, we only have to look back to the seasonal factors used during 2015 to report a lower SA FTU. The media should be jumping up and down touting a lower SA FTU number. I won't hold my breath. It may be years until they report on this data.

Continuing Claims were recorded at 1.713 Million Claims. If you want to talk raw data, without considering the seasonal factors, this is fewer claims than October 7, 1978. We have seen a huge decline in continuing claims since January 14 of 2009. This is up from last week's upwardly revised level of 1.621 million claims. You have to look back to the 1960s, when there were 80 million to 90 million fewer claimants, to find a weekly continuing claims level this low during this time of the year.

Last week this column wrote an article saying that you would be ignoring this data at your own risk.  The continuing claims level for the 11th of November is up from the level recorded during the week ending October 14th when it was 1.603 million. The continuing claims data measures the number of people receiving benefits. The U-3 unemployment number reflects those who say that they are unemployed and looking for work, whether or not they receive benefits. This indicates that we may see a spike in unemployed workers in the Jobs Report for November, non-seasonally adjusted. This happens on a regular basis. This may be seasonally adjusted out into a drop in unemployment because we are at historic lows for this time of year.  The FACTs say one thing. The data says another thing. 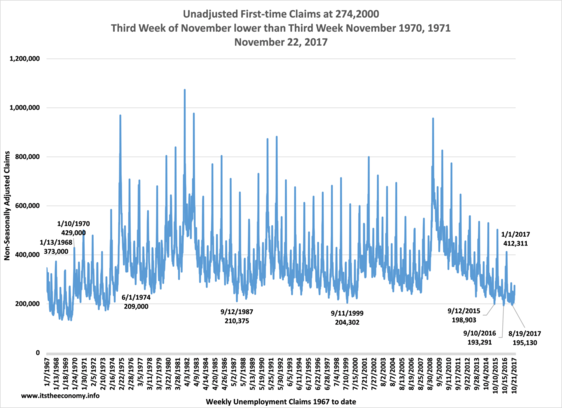 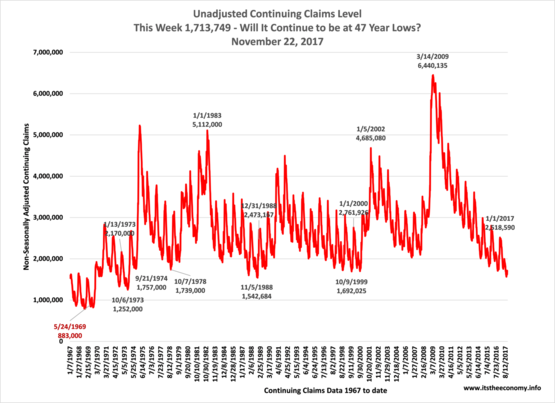 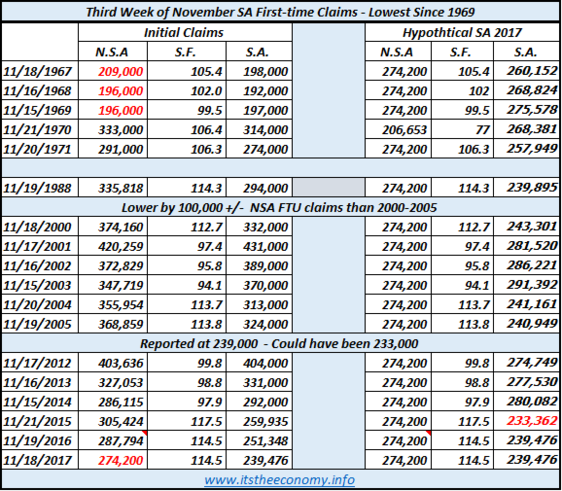 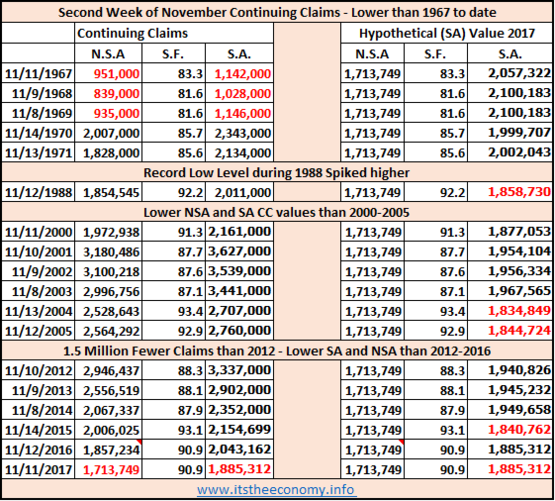