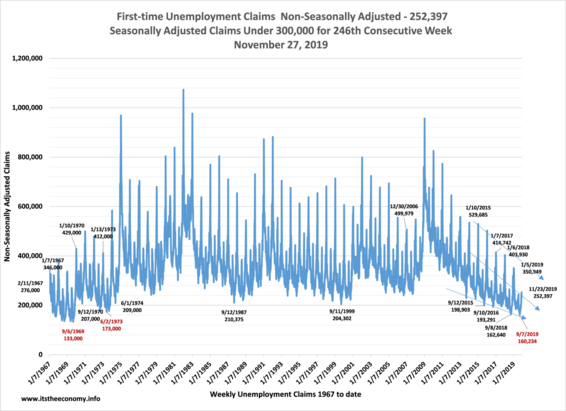 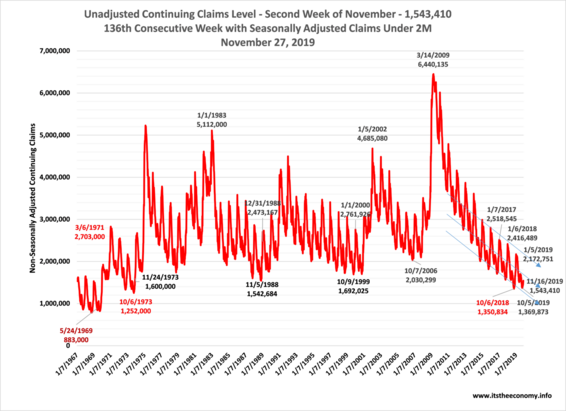 The weekly unemployment claims report used to garner bottom of the hour headline status as the seasonally adjusted claims level dropped from 500,000 to 400,000 to 300,000. The discussion shifted to the number of consecutive weeks under 300,000 SA FTU. Fifty. Sixty. Seventy. Eighty. Ninety. Presidential election. Crickets.

The headline seasonally adjusted first-time claims data was reported at 213,000 claims. This is a drop from last week's 228,000 level, This is well under 300,000 claims.  The under 300k streak started March 7, 2015. This is week 246. It is important to note that the range of seasonal factors for this week of the year is very wide - in part because some Novembers have a fifth week of data - as does this year.

Continuing Claims rose to 1,543,410.  This is higher than last year's third week of November. We also have 2.1 million more covered insured this year compared to the  same week last year. This uptick was expected.

The Seasonally Adjusted Continuing Claims data was reported under 2 million for the 136th consecutive week.  Crickets in the media because there are crickets in the report. The seasonally adjusted data could have been reported higher than it was. This streak started April 1, 2017.

The Insured Unemployment Rate (IUR) was recorded at 1.07%.  This is just slightly lower than the 1.01% during the same week of the year last year. That was a record low for the third week of November. Again, one week does not make a trend.