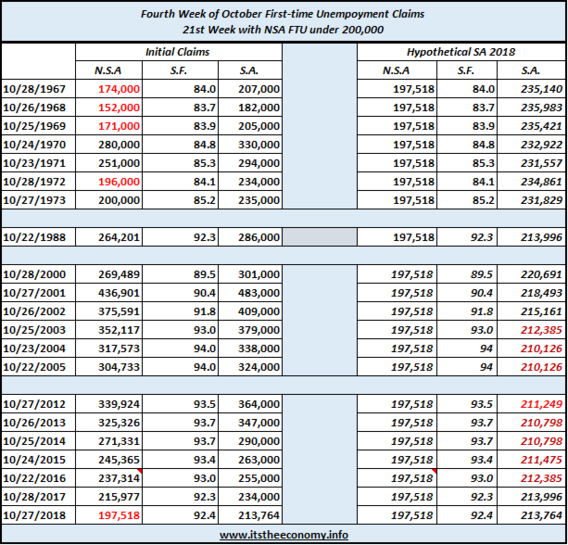 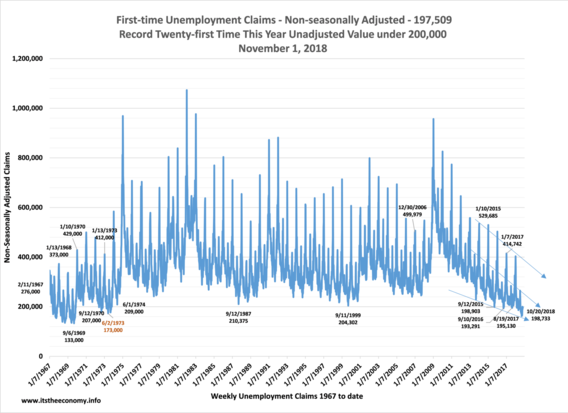 This year has been a record setting year for the weekly unemployment claims data. If this had happened under former President Obama then this would have been headline news across every newspaper and top of the hour news on television. The weekly unemployment claims data is the most recent economic data and is now the most unloved piece of data. What is so great about the data?

The "seasonally adjusted first-time unemployment claim streak" continues with seasonally adjusted (SA) first-time claims (FTU) remaining under 300,000 claims even with the hurricane season last year and this year. Readers of this column now that the "under 300,000 claims streak" is a FACT, False Assertion Considered to Be true. It is an economic urban legend. The streak did not start when the former Obama Administration said it did, and it ended, or should have been reported as ending, November 19, 2016. The continuing claims data dropped last week, the week closest to the jobs report collection date, so we should see the U-3 unemployment level drop, non-seasonally adjusted, NSA, tomorrow with the release of the October Jobs Report. What was recorded and what was reported this week?

The Continuing Claims data could have been reported as low as 1.601 million claims. This data is normally considered healthy when the SA CC value is under 2.00 million claims.  If we used the seasonal factors from the 1960s and 1970s then we could have recorded it up as high as 1.8 million claims. The interesting thing to note here is that while we are lower than where we were during the first week of November 1988, this means that we might have two more weeks of declines in the continuing claims data.

This column has spent more time analyzing this data than probably all of the newspapers and all of the television stations in the United States combined. The data tables were set up yesterday, The data tables and graphs were updated this morning. It doesn't take to much to change a "20" to a "21" in one data table. The point is that this information is being taken for granted. The seasonally adjusted data remains seriously low. The authors of the report are comparing the seasonally adjusted continuing claims data with data from 1973. They are performing a similar comparison with the SA IUR data from 1973. We have 89,000,000 more covered insured right now than we had during 1973. We have 89 MILLION more covered insured compared to a TOTAL of 53 million covered insured during 1973.  We had 89 million fewer covered insured during 1973 and only 100,000 fewer continuing unemployment claims during the third week of October 1973 compared to the third week of 2018. This concept is escaping the attention of virtually every economist and every journalist in the United States.

What does this mean for the overall economy? This column published a number of articles during 2015 and 2016 expressing concern over the entire economy. There was concern when we did not hit a new low for NSA FTU claims, only to have that value be hit the following week. This article has been lamenting the lack of existing home inventory since December of 2015. A drop in unemployment should mean an increase in  Current Population Survey (CPS) jobs and Current Employment Statistics (CES) workers. This did not necessarily happen during the former Obama Administration. The Unemployment rate fell because the participation rate fell. Unemployed workers are added into the calculation for participants. President Trump has managed to improve participation through full-time job Creation while trimming unemployed workers, and depending upon the month, adding or trimming part-time workers.  A drop in unemployed workers is the addition of a negative participant.

How does the Continuing Claims Data compare to the Unemployed Worker Level or Job Openings Data. It Doesn't.  The NSA and SA CC data is one survey. The Unemployed worker data comes from the CPS data set. The Jobs opening data comes from the JOLTS data set. The JOLTS data that will be released next week is for the month of September. The unemployment data that will be released tomorrow is the U-3 data for October. The JOLTS data closely resembles the CES data. They are like identical  twins. Similar. Different. The FACT that Seasonally Adjusted Job Openings are higher than the Seasonally Adjusted U-3 Unemployed worker level is a False Assertion Considered to be True. It is disingenuous to compare seasonally adjusted data with seasonally adjusted data because the seasonal factors change from month to month a year to year and data set to data set. We had 5.766 million NSA U-3 unemployed workers last month. We had 1.410 million continuing claims the week closest to the CPS collection date.  Will we see a drop of 30,000 unemployed workers this month. Almost certainly. The October Jobs Report Forecast Article projected that we could see 100,000 or 200,000, or 300,000 or even 400,000 fewer U-3 unemployed workers. It all depends on how many people said that they were looking for work. Do we have four to five times the number of seasonally adjusted job openings as we have seasonally adjusted continuing claims? Does it matter?

Do we have an unemployment rate under 4% or under 1%? Does it Matter? Participation Matters. Jobs matter. Wages matter. The number of people working multiple jobs matter. The sectors that are seeing growth matter. 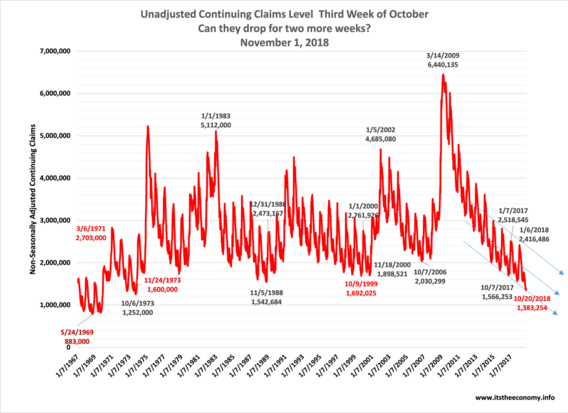 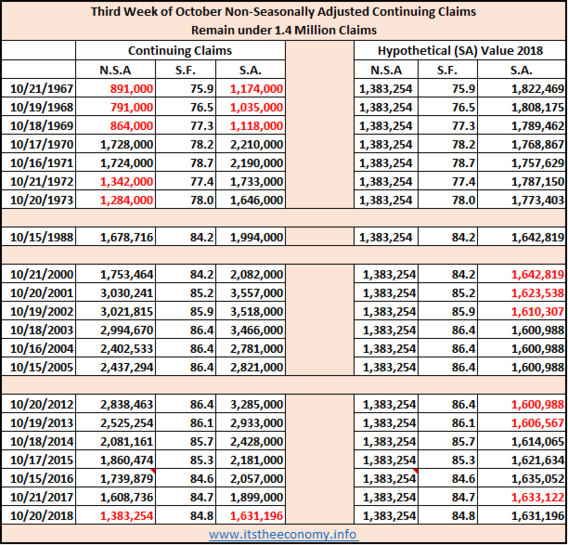 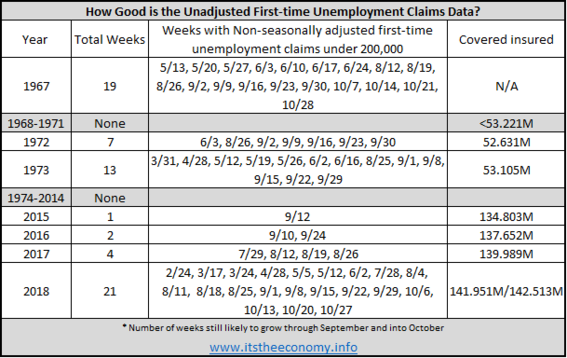